Lost 3lbs since weighed a fortnight ago in Mallorca (didn't weighin during second week of holiday as was at House of Katmandu - posted about it last week). Which, with drinking on quite a few occasions, big meals on quite a few occasions, ice cream and all manner of junk that I don't touch normally ('new normal' not 'old normal'!) is a good start. Have done a big bike ride tonight and will be doing the same at 5am tomorrow going the other way so am burning a lot of calories too (1164 according to Garmin Training Center - how does it work it out I wonder???) . 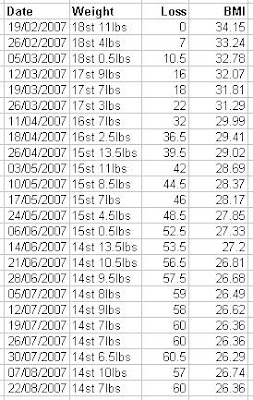 Blood pressure ten reading average (didn't take blood pressure monitor to Spain so it goes back a bit) is 125.3/76.9 so up a bit.

Looks like not much happened since end of June but... stopped smoking on 2nd July, went on hols for two weeks in spain with additional alcohol so am not disappointed an in any case 4st 4lbs in six months is alright with me!

Focus now is to get another 3.5lbs off which would make my overall weight 199.5 lbs which would be another sort of a landmark passed. Think it's going to take two weeks though so am not holding my breath.
Posted by Paul at 19:47