Monday 28th March 2016
Up early.  Raining cats and dogs.   Took pooch a mini walk as she does not like the rain.  Got the papers, got home, shower, shave off to work.   In the office for 7.52 not bad with clocks going forward yesterday.  Good day in the office.

Back home for 5:30pm   Tea then out with the pooch who went on to roll in fox muck, bless her. 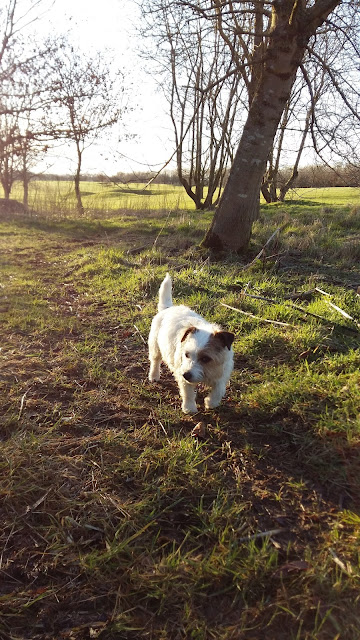 Got missus' sweet peas planted after soaking 'em for a day.   Watched the usual Monday night telly while the boss was out - Houdini and Doyle, Vinyl (great episode), Blind Spot - top stuff!

Tuesday 29th March 2016
Up at 5.45am - taking a bit of getting used to this British Summer Time.  Car scraped. Dog walked, papers fetched into the office a few minutes before 8am.  busy day again.  Home for about 6pm/.  Tea.  Dog walked. Tinker in Greenhouse - potted the cauliflowers to get them going a bit more.  Two episodes of Thrones - very good.


Wednesday 30th March 2016
Up at 5.36, car scraped for second day in a row, papers fetched, dog walked, in the office for 7.50am.  All good stuff.  Lost 4lbs at group - so at least one thing good came out of being really poorly at the weekend!   Back home for 6pm.  Tea then walked the dog up the golf course again.   She loves it up there - unfortunately she now knows what rabbits are so will need to be super careful from now on.


Thursday 31st March 2016
Can't remember what I did Thursday such is life.

Friday 1st April 2016
Busy day in the office.   Went to Okoeover Arms at Mappleton for tea - it was grand.   Quite drunk though!!

Saturday 2nd April 2016
Up early.  Chucking it down.  Small Dog small walked.   Did a ton in the greenhouse.  Lots of Dog walks - saw John and Doug on the golf course - had a quick word.   Chippy tea then wedding do in the evening - good stuff.

Sunday 3rd April 2016
Up early, dog walk.   Gave Phil a lift to fetch his car.  Another dog walk.  Aldi with the missus.  Allotment for five/six hours mainly digging manure in and weeding - legs knackered.    Got two rows of spuds in and got this year's strawberry runners into the next metre squared bed, 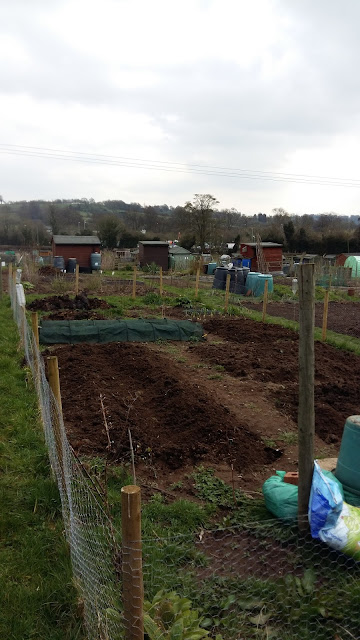 Tea, then dog walk with Lucy.  Very, very tired. Starting watching Series one of The Tunnel with Stanis Baratheon playing a detective.  Dead good it is too.

Monday 21st March 2016
Up at 5.25.  Dog walked, papers fetched into the office for 7.40am.  Dropped a load of stuff off at a supplier on way home.  Back home for a bit after 5pm so that was nice.  Washed car.  Took Dog a walk.  Fixed a bit of the fence.  Tea. Coffee.   Watched Vinyl which just keeps on getting wierder.  Watched Mad Max: Fury Road which I really enjoyed but Phil thought was very average. Bed for 10.30.   Bit late for me.

Tuesday 22nd March 2016
Up a 5.30 again!    Dog walkied, papers fetched, into the office for 7.45am. Ton of good work done.  Back home about 6pm.   Put the parrafin heater on in the greenhouse - don't think it was needed really but won't hurt.  Super duper Tea.  Took Lucy to get a fitbit watch which she's saved up half for.  Watched a Thrones and bed about 9.30 - absolutely knackered tonight.

Friday 25th March 2016
Up early, papers fetched, pooch walked.  Off to Col and Karen's to get some horse manure.  Got back to lotty for about 12 noon - 4 hours later finished barrowing the much to the two plots - our neighbouring plot-holders are also well pleased!

Saturday 26th March 2016
Woke up with lurgy, took dog walk and threw up on the way.  Went back to bed, stayed there until 1:30pm.   Dodgy tummy and nausea what a great time to get it.   At least weather was pretty rubbish.
Had a slice of bread to eat all day.

Sunday 27th March 2016
Up earlyish.  Took Pooch a walk along the line.  Still feeling awful.   Didn't eat anything until tea time.  I cut another three three foot sections of gutter up and got some more peas going.

Mum and dad came for dinner and I had nowt.  Dad suggested brandy and ginger and it worked a treat.   Took el pooch a walk up the golf course.   She loves it up there. 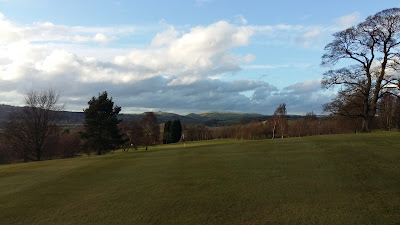 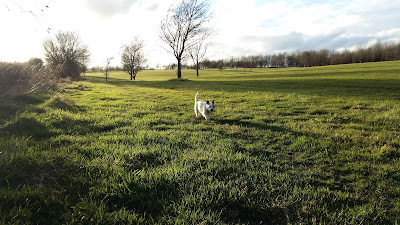 Went to bed about 9:30, slept pretty well through, no further squitters.  All good.

Monday 14th March 2016
Not much to report - up early dog walked, papers fetched, work, home, fixed the Gtech Hoover, watched a bit of telly, off to bed.

Tuesday 15th March 2016
Up easrly.  Dog walked, papers fetched, work, home top tea, more walks, did a bit in greenhouse - have got a better bit of insulation on the door now but have also got a cunning plan to make it even better in due course!!  Watched two episodes of Game of Thrones for first time in about a year and it was grand.

Wednesday 16th March 2016
Up early and out with the dog.  Papers fetched back.  Work for 7.40am, first in that's the way to do it.  Group after work - managed a maintain - happy with that all things considered.  Walked the pooch along the line in daylight which made for a nice change.   Got some Coco Coir soil stuff to try - apparently it's very good in a hydroponic way - will see about that.

Watched another GoT - very good can't work out why we stopped watching it.   Season 4 finale tomorrow night.   Bed early at 9:30

Thursday 17th March 2016
Up at 5:30.  Scraped car, walked dog, got papers on second \attempt as van hadn't arrived when we got there.   Into office for 7.40am.  Back home for 6pm.  Tea, then took dog a walk with the missus down the line.  Did a bit in the greenhouse getting all the strawberry plants into one tray so they can go down the lotty in due course.  Watched final episode of series four of Games of Throne, the hound is a goner it would seem as is Charles Dances character, and Tyrion is away.   Great stuff.

Saturday 19th March 2016
Up early.  Dog walked, papers fetched.  Down the lotty for 8am.   Took strawberry runners and the seed potatoes down.  Got the big raised bed thing cleared out so it can have a load of manure in it soon. Got a load of tidying up done and a bit of digging.   Took el Pooch for grooming in the afternoon to Beth.   Got two lots runner beans going in the greenhouse, tidied

Sunday 20th March 2016
Up early!!  Dog walked, down the lotty and another three hours number seven is coming on nicely now.  Back home, brunch and then did a bit more in the greenhouse. Planted some marigolds and some lavender for the bees.   Potted a load of little beetroots that I'll put out next weekend if I can. 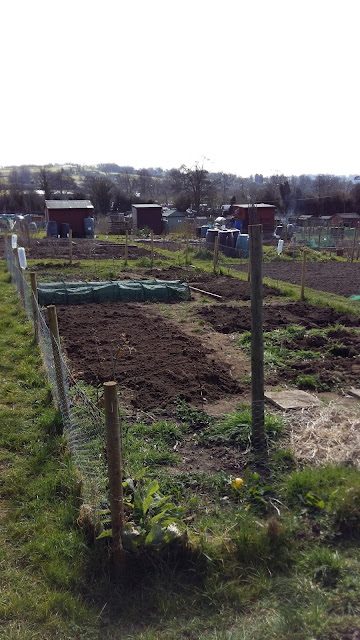 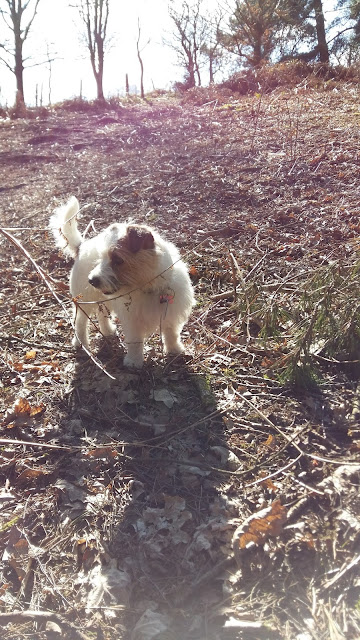 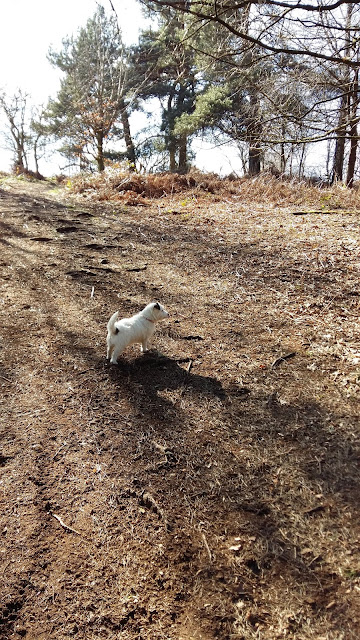 Took pooch a walk up Bradley Wood with el Pooch, the boss and Lucy then a bit of lawn mowing and then over to me mum and dads for tea which were grand!

Tuesday 8th March 2016
Up early.  Woke Lucy up at 6 to do some homework.  Dog walk, papers fetched.   Put antifreeze and what have you in missus car.   Work for 7.50 everything on rails.   Watered the propagator and the greenhouse - nearly ended up in a heap tripping over the bit of wood I've put down for the partition

Wednesday 9th March 2016
Up really early.  Chucking it down with rain - very short dog walk but all business done so everyone's happy.   Into the office for 7.40 even filling up the car with petrol.   Group after work - 3lbs gone well into the 16st mullarkey now.   On track.

Friday 11th March 2016
Up at 5.45am.   Dog walked papers fetched.   Off to work.  Stopped at McD's for first time in three months - they stopped doing the McD Big Breakfast - no wonder I've not been in for three months.  Went to that Wales at Lunch Time - only took three and a bit hours to get there which was nice!  Went and dug a bit of bait. 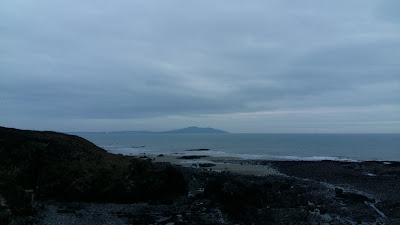 Had a bit of tea then went over to fish Cemlyn - a whiting fest but I managed to catch a pouting and a dogfish to lead our Andrew 3-1 in the Species race!!  High tide was about midnight - South/south westerly wind - Cemlyn flat calm - probably needs a northeasterly to do any good there. 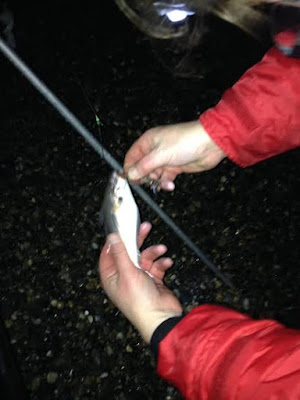 Back home about 1am, bed very late in deed up again about 8am

Saturday 12th March 2016
Up earlyish all things considered.  Bit of a walk.  Bit of breakfast off to Holyhead.  Walked a mile onto the breakwater.  fished pegs 12 and 14 and caught absolutely nowt. 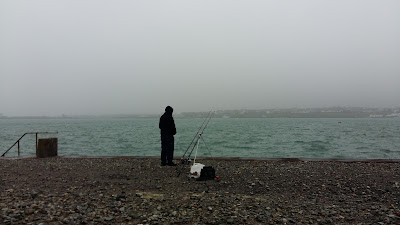 Waste of time but at least we give it a go.     Had a walk to the point and back. 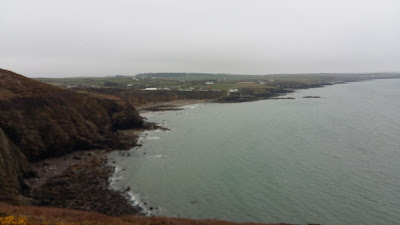 Back home rugby - England just scraped by but who cares.   Tea about 8pm after I'd had a bit of a kip!!!   Fishing down on the beach from about 11pm!!!   Andrew got a dogfish on cast one so he's only one behind on species count.  After that it seemed to be one rockling after an all.
This one was the smallest and on the very last cast which was well after 1am. 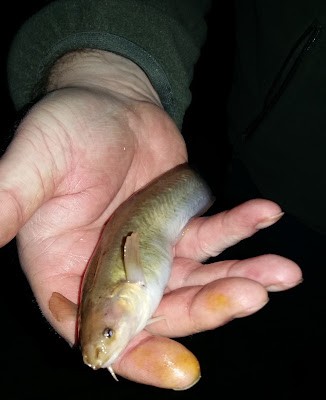 Sunday 13th March 2016
Up early to go and recover a rig our Andrew lost.   Felt quite warm.