Up at 4am - took the halfwit to work in his halfwit-mobile.  Unfortunately he kept the door key in his pocket so when got back had to wake the boss.  That went down well.    Anyroad had a lie-in got up at 8am!   Washed the cars, tested something called Rinsewax - not sure about it but looked okay.  Went to CostCo as bosskat wanted pictures developing.  Am hoping to get me eyes tested there next week, so I am.  Went over to me mum's.   Back home, waiting for a half wit to call.

Amazed to find Europe won the Ryder Cup coming back from 10-6 down to win 8 out of the 12 final day singles matched, amazed, David our Financial Director said you could have had 33-1 odds on Europe winning, 33-1.   Anyroad up here's a pic of PJ with the actual Ryder Cup from a year or two back! 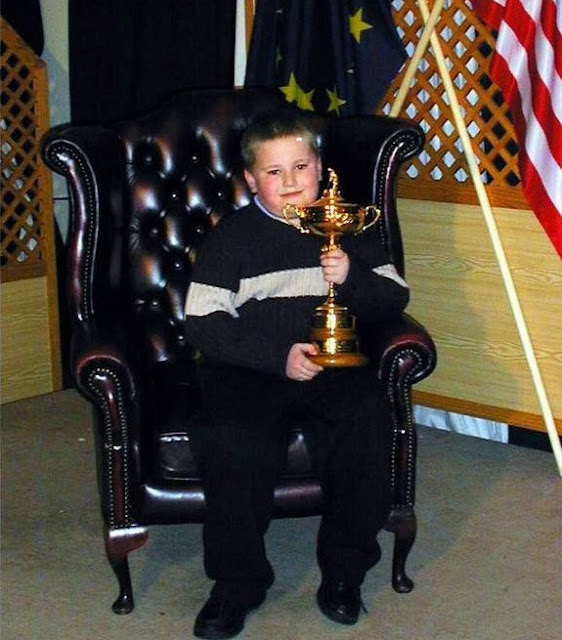 Slimming World's lend a hand campaign started today - taking the UK's favorite way to lose weight across the pond to the USA. The obesity problem in the US totally puts the problem we have in the UK in the shade.  Watch the video below for more information.

If you're in the US and know someone who could benefit from what is a cracking introductory offer - 4 months online membership for just $40 please pass on this link:
http://www.slimmingworldusa.com/site/?c=EQLEU6221

Tuesday 2nd October 2012
Could not get out of bed, 5:55 before dragged meself out so only time for quick ride up town and back. 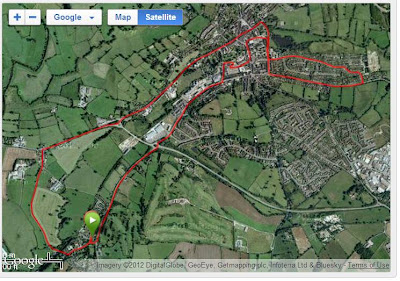 Dead tired, took PJ to work, topped up car with screen juice, watered me peppers (never give up..) took some tomatoes off the vines...  Off to work all good stuff.

Wednesday 3rd October 2012
Out in that London all day.   When got back we'd got the pipster dog again.  So plenty of walking coming up.   Went to CostCo to get an eye examination - very good it was too.

Thursday 4th October 2012
Walked the Pipster early doors. Only a mile and half'ish but okay none-the-less. http://connect.garmin.com/activity/229816905
Took Phil to work early doors.  Helped Lucy with a load of trigonometry homework which she'd not mentioned until I was about to walk out the door.  Such is life.

After work got Phil to give me hand getting  a broken bit of shaft out of a Callway 454 Head which am going to put on the end of another shaft in due course.  Took Pip out again before bedtime - all good.

Breakfast at McD's, bumped into Julia and Helen from work.

Got 6 out of 7 on BBC quiz of the week's news - never had that before. 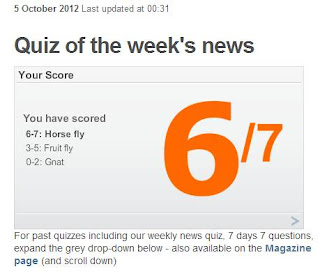 Saturday 6th October 2012
Pipster gone back to Will's never mind.  The missus is making noises to the effect that she will be ours soon. Long story.  Got up at 7:00pm, proper lie-in.  Went to bed early last night as well.  Am six days into Stoptober - have not had a drink all October so far - got to stick with it for a bit longer.  Am okay, honest.

Went a six mile ride on the Boardman to fetch papers. http://connect.garmin.com/activity/231274428

Took Phil to work.  Have cleaned all me fishing rods so they can get put away for Winter now. 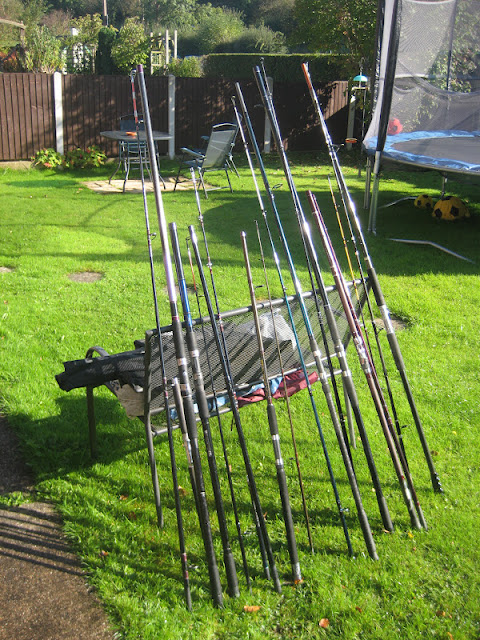 Bed earlyish.  Very tired and a bit of back jip on board.

Went to bed early last night.  Tossed and turned a lot.  Got up at 6:30 didn't do a lot.  Went to fetch bike back from Halfords at 10:30 all bottom bracket jip sorted out and no charge - can't argue with that!! 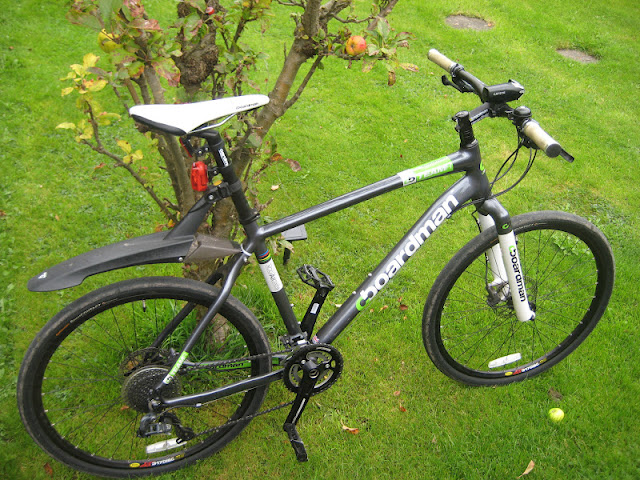 Lunch at the Whitworth Hotel, Darley Dale with mum and dad, very nice indeed then back home, get ready for the working week and off to bed early.

Monday 24th September 2012
Up at silly o'clock am, too the boss to Manchester Airport.  Back for just gone 7am. All good.  Don't know when I'll get any exercise in but such is life!!  Boss kindly let me leave early so got back in good time for Lucy.  Phil was dead late so instead of going out as intended it was chippy night and it was very, very average.

Tuesday 25th September 2012
Got off to bed at 10pm straight after New Tricks,  got up at 5:50 just before the alarm went off, all in all not a bad night's sleep.  No exercise at all again!  Got Phil's packup done, got him off to work, got Lucy's packup done, got her off to School.  Got into work late at 9:03 - need to be more organised tomorrow, that's for sure.

Wednesday 26th September 2012
Nowt to report still.  Got the kids off to school, no exercise, back to normal at the weekend all being well!

Thursday 27th September 2012
Up early, no exercise, Phil to work, Lucy to school, me in the office for five to nine.  All ticking over nicely, really.

Friday 28th September 2012
Same again, missus is back from Dublin later though so back to normal real soon!!

Fetched her from Manchester Airport 7:45pm, saw Mick McCarthy in car park at the airport getting into a range rover.   Things back to normal tomorrow.

Saturday 29th September 2012
Back to normal.  Round of golf with the chaps just scraped home - didn't score much and a bit rusty but quite a few pars including the last hole.  Took a 3 wood off the tee a fair bit and that worked a treat - hit 3 wood, 5 wood to par the last and it worked real cool.
http://connect.garmin.com/activity/228814757

Sunday 16th September 2012
Not much to report.  Up at 4:30, took Phil to work.  Got a couple of hours kip, went up attic, got case down for missus.  Mowed lawns, watched end of Tour of Britain, weatched Women's British Open.  All good.

Tuesday 18th September 2012
Up at 5:30.  Out for a 2 mile run http://connect.garmin.com/activity/224145664 Very slow - didn't feel that bad at the time although legs are tired from 8 miles of golf yesterday.   Then went to fetch papers on bike which would be about 5 miles but watch was coming up battery low.  Such is life!

Wednesday 19th September 2012
Up late, nearly 5:55 before fell out of bed.  Got Phil up at 6:10, went out on the bike, noticed a bit of lateral movement and it turns out a bit of the bottom bracket has fallen off so have contacted Boardman via Halfords this morning to see if can get it fixed.  The silver lining in this one though is that it means I'll have to get the Giant out.   http://connect.garmin.com/activity/224479496 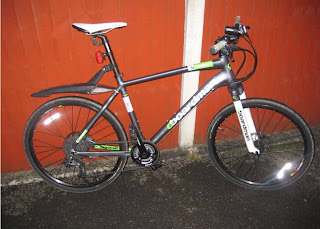 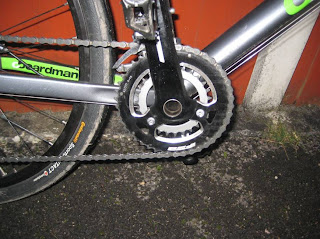 Took Phil to work, late getting back but just about on time into the office at 8:30.

Took some pics of the sunflowers before the frost gets em. 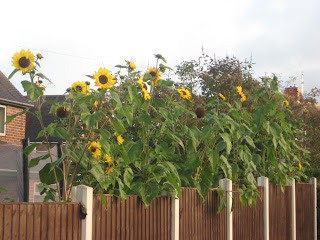 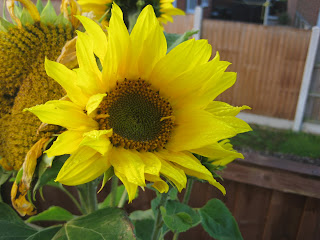 Thursday 20th September 2012
Up dead early, raining so did no running.  Ironically I went to the Leisure Industry Week show at Birmingham NEC which was very interesting loads of really fit folks showing stuff off.  Got some interesting ideas from it. 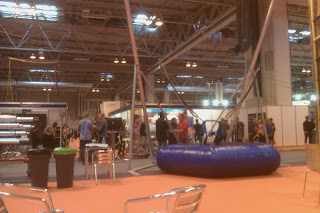 Sunday 9th September 2012
Well, no fish to be had previous night and it had got a bit wet and windy so we packed up and set back off for Ashbourne.

Monday 10th September 2012
Got a day booked off work so thought you know what we'll go watch that Tour of Britain mullarky come through Ashbourne - really good twas too. 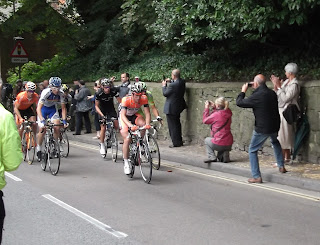 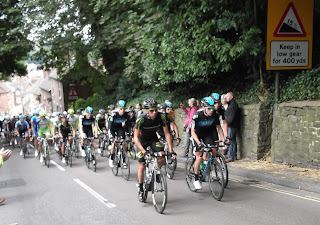 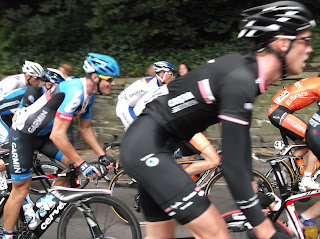 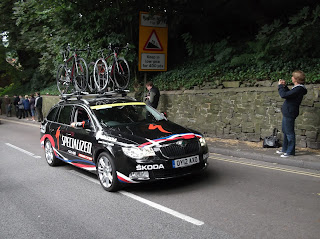 Didn't do a lot else - took some stuff to recycling centre.  Put poles up to support me Sunflowers (lost one at the weekend due to the winds and it being nearly a hundred foot tall, give or take).  Fetched some wood and stuff for some additional work on the kayak house.

Tuesday 11th September 2012
Got up at 5:50, the darned alarm clock is not working as it should.  I wonder if you can still get a Sony Digicube - had one of those back in the day and it never let me down. Wonder what happened to it.  Took Phil to work - have come to the conclusion that it's severely disrupting my fitness training so need to do something about that.  Into the office for 8:15 all good.

Was just a bit too late for the bike ride so fetched papers with Phil, got him to work.   Have put a decent rear light on the bike though so that's progress.  Nothing to slow me down next time.

Am thinking of doing a bit more work on the kayak shack tonight and might get the car ready for another trip to Wales at the weekend.

Saturday 15th September 2012
Not much to report.  Fixed the cooker filter and lights and did the odd odd-job.

Sunday 2nd September
Cracking night's fishing Gromit!  Two decent size bass (biggish schoolies, 2 little whitingy things, one tiny Rockling on the final cast!)  Got off beach at silly o'clock.  Got woken up by kids shouting on campsite at 7:34 though so a bit short of sleep.   Had decided night before I wanted to get off early so back home for about 2pm which was okay after another breakfast in the tent 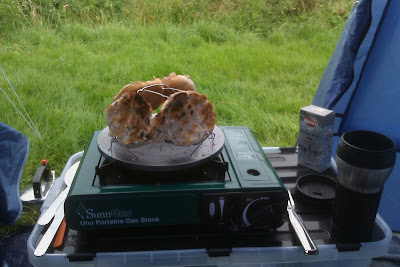 Did a bit of work fixing our Andrew's beach caster - re wrapping the bottom ring. 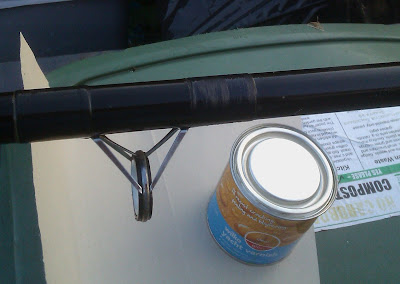 Took me yonks to remember how you do the loop thing but once got that started I think it took 40 minutes ish to wrap, 2 minutes for first coat of varnish then ten minutes of rotating so that the varnish didn't run.

Got back from work, had tea then did a bit more work on fixing our Andrew's rod.  Phil has mechanised the process of turning the rod to prevent varnish run:- 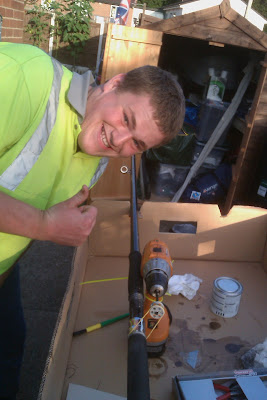 Then it was over to dad's to move a fridge (which was greatly eased by borrowing a trolley from work.  Fridge done, back home watched a load of telly, had a beer, bed late, silly boy.

Put another coat of varnish on the rod before coming into the office, one more coat and I reckon it'll be done.  Might re-varnish a few rods now we have Phil's patented rod rotator! It may look like a cordless drill with a bit of lego and an elastic band but it's way, way more complex than that. Oh yes, yes, yes.

Sorted a few things out at home - put what I hope is final coat of varnish on our Andrews rod - come out a bit bubbly so might have to start all over again!

Into work at 8:20. All good so far.  We finally got Phil's car taxed after much fun and games. So had to enjoy a bit of car tutoring with him.  Hopefully got last coat of varnish on Andrew's fishing rod, might do one final one as it's a bit bitty.

Thursday 6th September 2012
Up early but zero exercise.  Took Phil to work at 6:30 after fetching paper's and doing a couple of odd jobs here and there.  Then found the fool hadn't taken any milk to work with him (ironically his work is a dairy farm!) so dropped him off some milk on my way in.   Into office eventually at 8:40.

Re-varnished another two rods as well last night.  No exercise is a bit of a worry.

Friday 7th September 2012
Up early - paper - Phil drove to work, I drove his car back.  All good fun.  In office 8:30.   There's a debate as to whether he's coming to Wales or not.  I think he's going to jib but can't be sure.   I've got to fetch the kayak back whether he does or not though so that's where we are!

Saturday 8th September 2012
4am took Phil to work.  7:15am went to collect him, 8am got back set of for Wales.  We got there for lunch-time and were out on kayaks in early afternoon - all good fun.  Went fishing later but it nowt out there. Still good fun.