Good Friday 2nd April 2010
Couldn't get the ding dang Garmin going so only got time for 4.3 miles, still pace not bad at 9:59 certainly getting better! 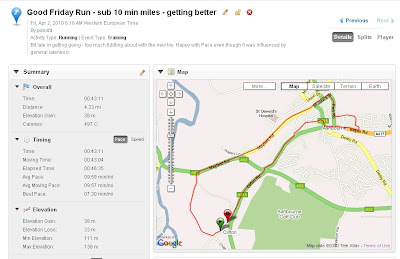 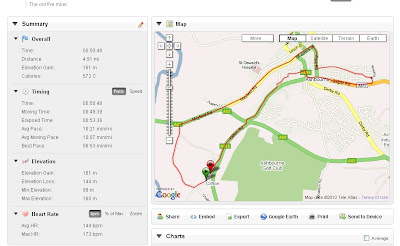 Wednesday 31st March 2010
Struggled to get out of bed this morning. Tired legs again so did the old five mile route at about 11min/mile pace. Really tired. Might be because I did a couple of miles extra last night while listening to the mighty Skid Row. What a blast from the past!

Tuesday 30th March 2010
Got up at 5:35 which was better this morning, did the 6 and bit mile loop in about 65 minutes which was okay as my legs feel like lead they're that tired from Saturday. Was going to go out last night as well but poked my head out the door and it was chucking it down which made my mind up for me. Fairweather runners of the world unite!

Monday 29th March 2010
Jeez, messing with the clocks really is bad news. Couldn't get out of bed 'til ten past six so three miler was the best option, put together with raining cats and dogs and legs like lead from yesterday and it was the only option! Good news about putting clocks back is that the clock in my car is at the right time again which is the first time for six months!!
Posted by Paul at 07:33 No comments:

Bit disappointed, 18 miles in a 3 and a half hours which I suppose is about 5 mile an hour'ish. Thought I was doing quicker than that but hey ho. Set out quick and wasn't far off 10 min miles for first 8 miles so definitiely faded somewhat after that. 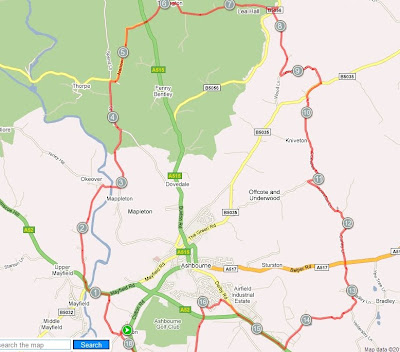 Saturday 27th March 2010
No running; it's my rest day but played some hideous golf - 28 stableford points off the yellows. Rubbish.

Thursday 25th March 2010
5 miles but rubbish - coughing and walking mixed in. Saw myself on video today - ye gods need to lose some weight in a hurry.

Tuesday 23rd March 2010
Did another two miles last night as it was too wet for the bike. Went out and did the old five miler this morning as I was late getting up. Went to doctors, have got a chest infection so I've been prescribed some antibiotics which will hopefully sort it out. Am hoping that it'll stay dry enough for the bike tonight otherwise it'll be another two mile whizz round the block!

Monday 22nd March 2010
Felt it in my legs this morning and no mistake. So chose the old five miler rather than the new one. It was okay but coughing up rubbish all the way round isn't helping my training at all, I wouldn't mind if I still smoked. Hey ho, that's life. If it drys up I might get out on the FCR1 tonight.
Posted by Paul at 12:54 No comments:

Sunday 21st March - 21 mile Marathon Training Run
Set off at 7:45am got back just after noon so about 4hrs 15ish. Knackered this week but the miles have got to get done. Todays run was hillier than normal instead of turning down Newton Lane I carried straight on for a change and it was lovely but uphill! Still it's good to get out, if you do the miles you can do the big run on the day; that's what I learnt last year! 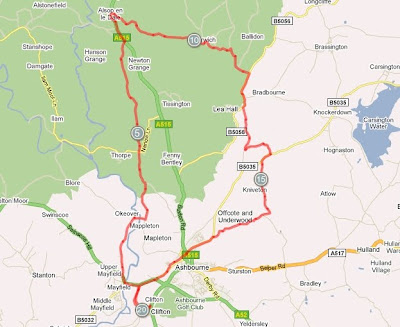 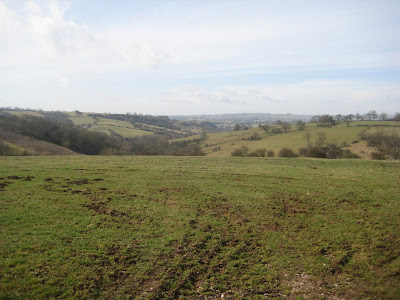 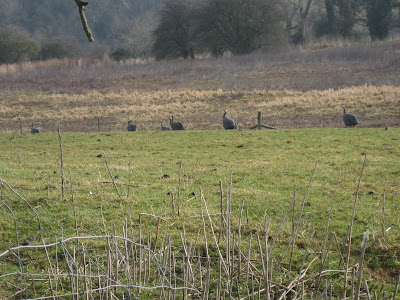 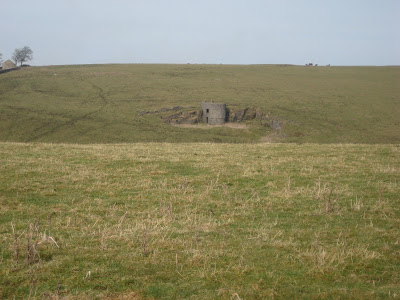 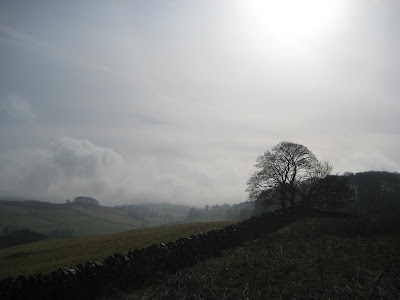 Friday 19th March 2010
Up at 4am, on way to Airport at 4:45, in air at 7:10, in Glasgow 8:10. Working on an equipment deal then flying back later. Zero exercise today but lots of stress. Going to see Jon Bishop tonight as long as everything goes to plan.

Thursday 18th March 2010
Another six and a bit this morning. All going well. Got to go to Glasgow tomorrow. Went to Badminton with Lucy, a right old session - played a mini-tournament with the whipper snappers - won one (a 10 year old) but got hammered by two teenagers, although played a bit better against one of them than the other! Went to Janet's group - lost two pounds this week. Getting there slowly. Five weeks til marathon I think - 20 miles on Sunday planned.

Wednesday 17th March 2010
Watched part 2 of the Eddie Izzard: Marathon Man thing last night - good inspiring stuff. Ended up doing about 7.5 miles this morning due to one thing and another (don't ask).

Tuesday 16th March 2010
Reconnaisance duty; up at 5:30 then out on road for another 6 and a bit miles. It's all going on now, going to lose half a stone by marathon day watch this space! Did another 8 miles on the Giant FCR1 again at night. All good!

Monday 15th Evening Update
Gave Kathryn the pics from the Gallop at the weekend and she put em into photoshop and did some wizardry to make them into a panoramic composite - click on pic below, scroll left and right a bit and see if you can see the joins - there's four or five pics in the composite below!

Went out on the FCR1 and did another 8 miles again tonight. Was a wee bit dark but was lit up like a Xmas Tree so no worries.


Monday 15th March 2010
Watched Eddie Izzard: Marathon Man part 1 on Iplayer as recommended by Mrs Bullimore. Very good and it inspired me to a mid-distance run this morning - not clocked it yet but I reckon a good 7 miles at a good (i.e. no stops) pace. Pleased so far.

Mothering Sunday 14th March 2010
Got up before dawn broke to take PJ to work for 5:20. Did a load of jobs - hoovering, car-washing, tidying garden up ahead of first cut in a few weeks etc.etc. Took missus out for lunch at the Nags Head, Hulland - very good carvery. Then when got back had a ride out on the FCR1 for about eight miles, walk up golf course and few swings with an 8 iron for practice. Remembered something rom a David Blair video my Dad had that was quite useful so am going to be doing some drills during the week see if I can get my golf improving now my handicap has been altered to a useful 18!
Posted by Paul at 08:39 No comments:

The Gallop deserves a post of it's own. 21 Miles of the best scenery you can get when running. Me and Kathryn did it last year and we did it again (a bit slower) this year but this time got some pictures to prove it. 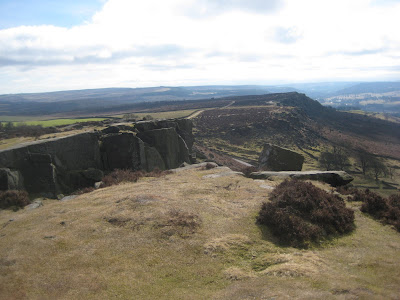 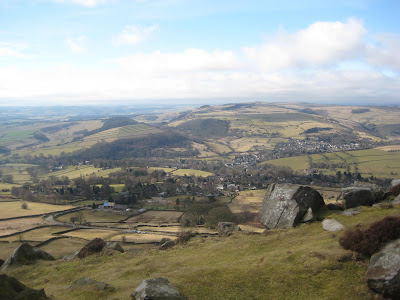 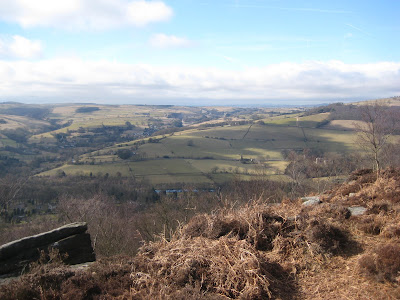 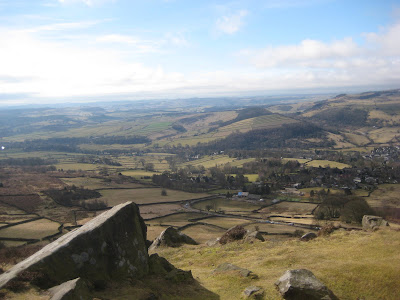 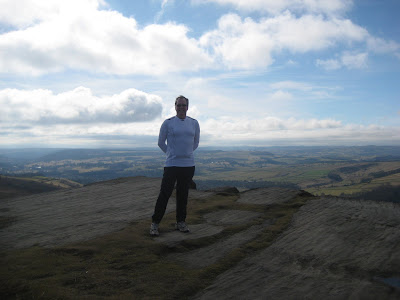 Up at 4:45 took Phil to work at 5:20, met Kathryn at 6am at Darley Dale, started doing the Grindleford Gallop at 7:15am, 5.5 hrs later it was all done. Kathryn not running at her best so we took a bit longer but well worth it - this is a run highly recommended to all just for the views - it's damned hard to beat. 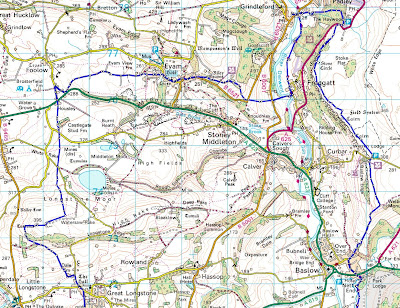 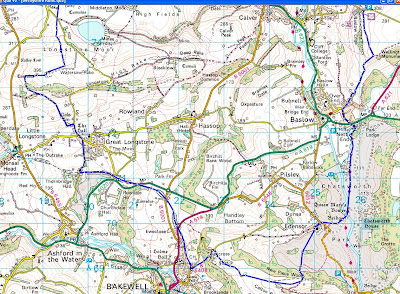 Friday 12th March 2010
Got up at the normal time but no run today; it's rest day before the 21 mile Grindleford Gallop tomorrow!
Thursday 11th March 2010
A really solid five mile run with just a break to get the newspapers. Good stuff, rest day tomorrow. No badminton tonight but back to the attack next week.

Monday 8th March 2010
Back feeling better; am going to doctors soon as they open. Walked up town and back for three miles - doctor said back probably down to running 19 miles on Saturday.

Sunday 7th March 2010
Woke up with my back seized up. So not done any exercise. Did a load of fund-raising web site development.
Posted by Paul at 14:20 No comments:

Saturday - Big run day
Had a couple of shandies last night which is probably not the best prep for a big run but was okay in the event - did 19 miles in 3:45ish which was by no means fast but okay. 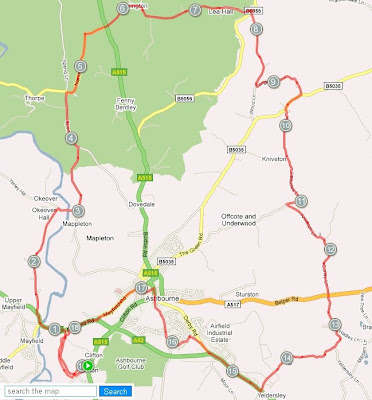 
Thursday 4th March
A good five miler this morning. Non stop apart from getting papers; about 52 mins all told including getting papers. Disappointed not to have lost any weight this week but that's what happens when you're not following the plan properly.

Wednesday 3rd March
Another five miler - habit now - can't saying I look forward to it in the morning yet but am keeping on doing it day after day after day - which is good!

Tuesday 2nd March
A better five miles this morning. Got some Nike Pro Core compression gear - not bad at all. Got the FCR1 out last night, full of good intentions - got about a half mile from home and realised it was just too cold, thought I was getting frost bite in my ears. Won't be long though and the weather'll be improving!

Monday 1st March
Up early made me self do a slow five miles.

Sunday 28th February
Did very little - got up at 4:30 took Phil to work, it was raining and didn't feel well so went back to bed. Cleaned cars, Missus birthday lunch at the nag's head, Hulland. Not much else - tried new driver out for a few holes that were it. Not done a big run. Ashamed of me sen for taking it easy. Fool of a Took.
Posted by Paul at 08:43 No comments: