Monday 20th February 2017
Blimey you lose track of time don't you.  Up early, dog walks.  Back home, Tea, Did some drum practice in the Drumattic.   Watched a bit more of The Killing.

Tuesday 21st February 2017
Up early.  Dog walk, stuff.  Took Lucy to school so not in the office til 8:40 (walked from Car Park) still couldn't be helped.  Walked to the car and back at lunchtime.  All good stuff.  Got home for about 5:40pm Dog walk Drumattic watched last episode of series one of The Killing.  Superb scandi telly I have to say.   Watched first episode of series two - I don't think it will be as good but it will still be better than most telly.

Wednesday 22nd February 2017
Up reet early. Dog walked, papers etc.etc.   Parked up and walked to office by 7.20am - people will think I shat the bed so they will.   Never mind.  Am enjoying the walking mullarky while the weather's good. 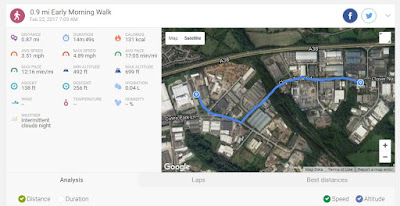 Football with Lucy after - played in goal for a bit - lost 5-3 but Chumlee was goal hanging for one of em and another I had no chance (was culpable on one of them though it must be said).  Never mind, another episode of series 2 of the Killing when got back - top telly.

Thursday 23rd February 2017
Up dead early.   Dog walked, papers fetched   Trying out fitness watch that I got from work at Christmas.  Think Lily pulled it off as when got to Sainsbury's I couldn't find it!   So u-turned and there it was on floor outside the paper shop - very lucky - people must have walked round it but fortunately there'd not be many folks about it.

Work for 7.40 after walking in. Carefully observing puddles and car positions to avoid a soaking!

At 8am I've got 50% of required steps in - took pooch round town and walked from car to work this morning - can't be bad.

Friday 24th February 2017
Up early. Work. Delivery to Storeship.  Home.  Gig at Winking Man - blast from the past stuff and no mistake!

Saturday 25th February 2017
Up early after getting to bed at 3am!   Rather cream crackered.  Golf cancelled as John not well.  So did a bit in the greenhouse.  Fell asleep about 6pm supposed to be going out Saturday night but so tired I couldn't.

Monday 13th February 2017
Up early, dog walked, papers fetched, First day of off-site parking at work - first on the bus into office for 7:30 am all.  Sent off a pedal thing I sold on eBay - it paid for the mic stand, projector stand and music stand I also got with it from Pyes!  Whoop whoop.

Got home and did a bit of recording in me drum studio! More dog walking, more The Killing - what a great series that is.

Tuesday 14th February 2017
The usual.  Work for 7.30am, first in the office as usual.   Went to ScrewfixDirect.com to get a combination padlock and some CCTV signs for the Cycle2Work shed which is causing some stress at the moment.   Back home for 5pm, dog walk up golf course - only found one ball which was disappointing.   Did a bit of drum stuff up in t'attic. Steak night at Golf club - great fun.   The Killing when I got back then fell asleep before end so thought it's probably time for bed.

Wednesday 15th February 2017
Up earlier than ever.  Dog walked, papers fetched.  Into office for 7.30, first on bus again.
Did a bit of work on reports in the evening - all good stuff.

Col Keyworth tagged me in a video post of the band which was quite good - you can only spot two cockups by me so nearly the full set!!

Thursday 16th February 2017
First in again.  All good stuff.   Dog walked then up in the Drumattic after work for an hour or so.

Slowly getting there - using Cubase 8LE, with a Zoom UAC-8 for mics (only mic'ing hihat at the moment rest of it is MIDI traffic coming from the Alesis DM6)  Pair of Alesis Elevate 8 monitors I got cheap from John Pyes. 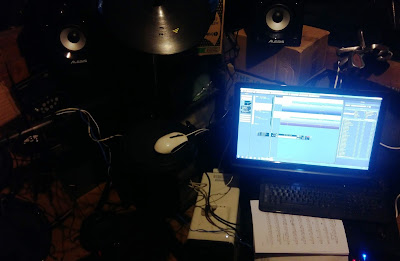 Friday 17th February 2017
Up late - 5.55am dog walked, papers fetched, not first on bus but still first in our office so not too bad all things considered and I got the car juiced up on the way too.  All good stuffs.   Did a bit more up in the studio before noticing that I've pushed the cone in on one of my monitor speakers.  Gutted.

Saturday 18th February 2017
Up early, Dog walked, papers fetched.  Went on the interweb and found that there is a way to cure pushed in speaker cones using a hoover - gave it a go and it works a treat.  Over to Belper for dog grooming at 10:30.  Back home and then golfing at 12:54 for once I managed to beat load Bandidos with 21 points - although John did come back well with 10 points in last three holes - not that I'm bemoaning the handicap system, you understand!

Took el pooch for a walk on the golf course.   She loves a run up there.

Watched some more The Killing - what superb TV that is.

Sunday 19th February 2017
Up early Dog walked.  Getting lighter every morning it seems!   Went down Lotty for 8.15 - left pooch at home as she'll only get dirty if I take her down the lotty.   When got there a rabbit was running round the inside of number 7's fence!  Found a little hole to get through it had so I've put a whopping big bit of wood behind it - will have to check both fences I think.   Brought 6 loads of manure up from the bottom for number 7 will have to do same for t'other one next week I reckon.  Left lotty about 10am and set off on next job after a cuppa.   Emptying the shed that the rat's have been in.    Found out we have 14 camping chairs!   Is that enough do you reckon?    Had to miss Lucy's football match as it took all day to empty the shed and even then I've not really emptied the whole thing - I couldn't find a nest in there so am hoping the buggers have ate everything edible and inedible and then buggered off.

Think Lily wanted to go to the match though!

Monday 6th February 2017
Work really early, home not too early but not bad.  Missus off to group.  Got a load of stuff up into the attic for me studio.  Going to be great.  Perhaps.   Got big PC up there and working - internet and everything.


Tuesday 7th February 2017
The usual, home while it was still light which was a good job as the roof has blown off one of the sheds.  Such is life.    Put temporary polythene sheeting on it while decide whether or not to put a new roof on it anyway.  Have got the roofing felt anyway!  Watched two episodes of Scandi drama The Killing - excellent.


Wednesday 8th February 2017
The usual.  Bit of a disaster callout on way home to look at a computer.  Back home for 7pm and did a bit in the attic.  Connected the Alesis DM6 I got for diddly squat to the big computer and now I can record midi drums which wasn't my main intention but will be interesting to see if I can do hybrid drums and midi in the long run.     Derby County put out a reserve team and suffered the consequences against Leicester in the cup and lost 3-1.  Such is life.  Watched episode three of  The Killing - it is superb even with the subtitles.

Saturday 11th February 2017
Woke at 4:30am, out of bed 9am.  Break.  Golf at lunchtime with Paul from Church Bay Cottages -cripes can he hit a ball even into a 35 mph gale!   Anyway, I lost by 1 point although he did misdirect me a couple of times - greens further away than told and gave me a wrong line once.  Never mind, he is from Warrington after all. 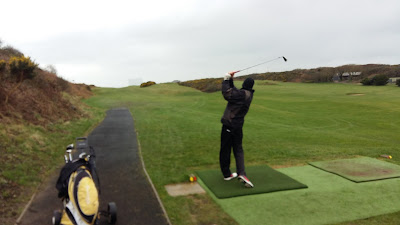 Watched England just squeeze past Wales which was nice when you're in Wales, Good job wasn;t in a pub!!

Monday 30th January 2017
Can't remember today but the usual I would imagine with dog walking and papers and load of work.  Learnt Van Halen's Jump at night playing it on a four pad and bass pedal set up.  Will get it into an MP3 and have a listen when I get a minute


Cripes I'm rubbish of late at keeping things up to date!!

Saturday 4th February 2017
Can't remember much but can remember doing a bit in the greenhouse where me Sweet Peas are doing nicely. 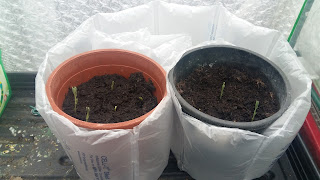 Also did an bit on the lotty chopping down Raspberry Canes so am ahead in the game there.


Sunday 5th February 2017
Bit on the lotty and stuff.  Footie cancelled again. Phil done me a fire drum thang.  Also chainsawed some me  fence stakes that I want to use for path edging.
Went out on a Gritting run with him - must be mad. 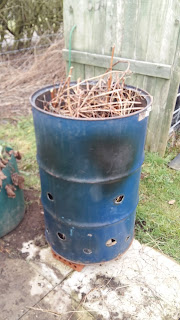