Monday 18th June 2018
Up at the crack of dawn absolutely cream-crackered.  Such is life.  Dog walked papers fetched - felt that as there had been a bit of rain the lotty would stand a day.  Over to Darley for watering duties, did a bit on the gutter, think it's about okay.  Popped down saw Uncle Michael then pounded back to watch England match.  Usual average sort of a performance from England but a last minute winner made it all okay!

Tuesday 19th June 2018
Up early, dog walked, lotty watered.   A bit late into work but not too late.  Found out that we'd come fifth and if I'd sunk a three foot putt and the 46" almost nearest the pin putt we'd have been equal first.   No justice.  Someone beat my nearest the pin by 4" as well.  No justice x two. 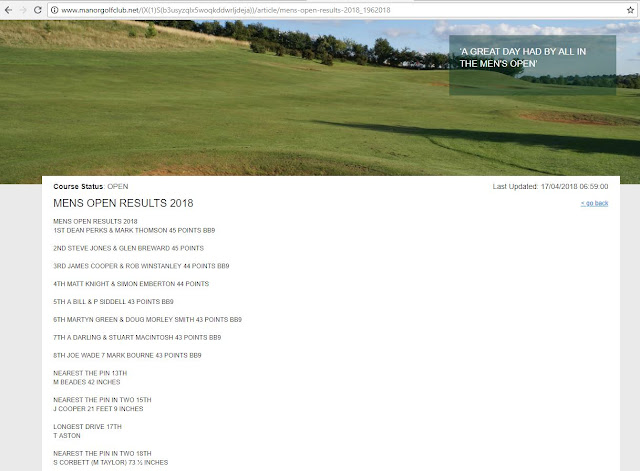 After work back home for 5pm, Tea then down to lotty to get a load of stuff in the ground - dwarf french beans, some runner beans to make up for the ones that have been attacked by something, 4 pumpkins and a load of sweet corn.  Still playing catchup in June!  Never mind.

Wednesday 20th June 2018
I watered everything last night so I could have an extra half hour in bed so didn't get up until 5:30.    Dog walked,  papers fetched, into office for 7.32 all back on track.

Tuesday 12th June 2018
Same as yesterday'ish but after work over to Darley Dale.  Watered everything and dropped off some metal chairs.  Took the plastic chairs to the tip where I got a couple of reet big plastic containers that had had ionised water in em.  Good stuff.

Wednesday 13th June 2018
Same old for start of day.  Went to lotty and cleared another patch on number 7 - I have got tons of rubbish that needs taking to the tip though.  Planted lots of flowers here and there!

Thursday 14th June 2018
Same as usual.  Went over Darley Dale for watering.  Got stabbed by a rose so watered topless to stop too much blood getting on me shirt.  Such is life.  Trimmed the gutter so that it would fit with the slightly smaller old bracket.  Put some water in it and found out the joint needs some silicant sealant in it will get some from pound shop if I can!!  Watered everything and then back home - chippy tea.  Mowed outside to fill the green bin up.  All good stuff!

Sunday 17th June 2018
Up early.  Took dog to lotty and watered.  Got some goodies off the kids for Father's day - bolts from Phil and a cracking picture from Lucy:- 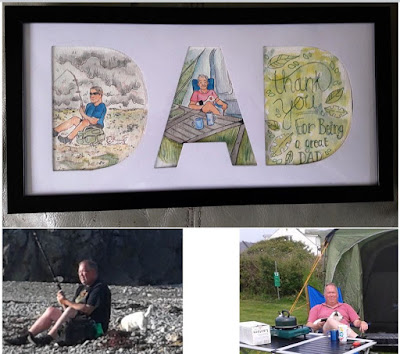 Got golf stuff ready.  Picked Andy Bill up at 8.30, teeing off for the Manor Golf Club Men's Open early at 9.15.  Rather enjoyed it played with two chaps from Sutton.   We ended up with 43 points which I thought was rather good but someone put a card in with 48!  Shows what I know.   We were  clubhouse leaders at least for a while and I had got the nearest the Pin on the 13th when we went past with 46"  - don't know if that held out or not.   Not to worry.

Cripes what happened to this week?

Tuesday 5th June 2018
Did I go to Darley to water on this day?  Wish I could remember!!

Wednesday 6th June 2018
Got camping gear down from the attic.  All good stuff.

Thursday 7th June 2018
The usual - up early , work.  Have I mentioned Bella Baps has shut?  Gutted.  Never mind am £6.40 a week better off perhaps.  Anyway after work over to me mum and dads to Water and do a bit on the gutter.    Got everything watered.   Got home went down lotty and watered.

Started loading up the car and of course the heavens opened.  That's my life that is.

Friday 8th June 2018
Up at 4:30am ish finished off loading up then off to Wales 5.15am!  Amazed at the amount of traffic about.  Got to Church Bay about 9.30ish with three stops on the way.  Raining when we set off but as soon as we got to Chester the road was dry and it stayed like that for the next three days. 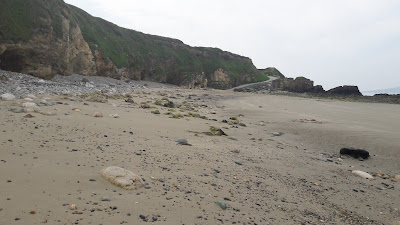 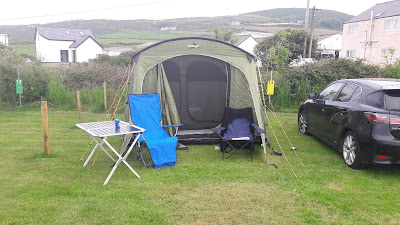 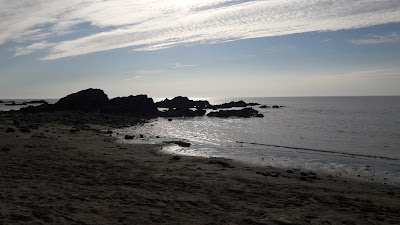 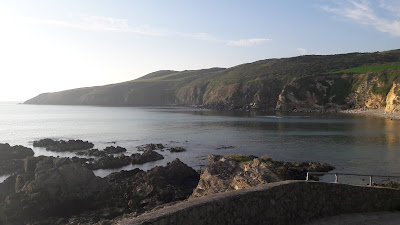 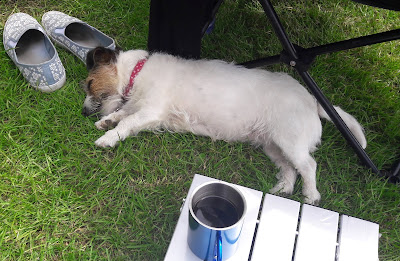 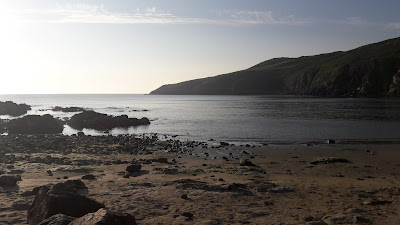 Saturday 9th September 2018
Well that was the night that was.  Pumping electro dance music until 3am from nearby GottWood festival.   Hmmm.  Slept a bit though so not all bad.  Weather awesome Went to Valley Car Boot - got two Ping G2 HL Irons.   Went a walk in Penhros Country Park with the missus, lovely day and the trees gave us some much needed shade!

Sunday 10th September 2018
Got up early again, had a shower etc  Music not as bad last night someone must have had words with them!   Packed up and came home.  Got back about 5pm unloaded then went and mowed Pad's lawn.