Been to Anglesey again, no running, lotsa walkin, more fishin, enjoyed it more than ever and getting to know the place better every time. Back to reality again though, it never lasts long enough.
Posted by Paul at 15:06 No comments:

Friday 22nd May 09
Just whizzed a few miles on slow but heavy, haven't decided whether it's coming on Holiday with me yet. That could be cool. Last night got mighty disrupted - rang brother-in-law up to see if I could borrow an SDS drill to put a hole in wall to run satellite co-ax through and he came down and did it which rather forced my hand. Had to run the co-ax thirty foot from dish, across front of house, down side and through in to dining room. Luckily rain came off. Also learnt how you do an f-connector to co-ax (a regular doddle if a spack like me can do it). Anyway, got a decent picture in the dining room now as we got a lil old £5.50 off ebay Sky Digibox giving us free-view! Cool.

Thursday 21st May 09
Steady three miles up town and back, load of weights and a wee bit of golf practice. Big Harry has given me two pieces of advice - keep your eye on the ball (I was doing a David Duval follow the clubhead sort of thing) and relax your arms a bit. Have been practicing keeping my head more still and focusing on the back of the ball but it feels way unnatural after I've had this bad habit for best part of ten years. We'll see.

Wednesday 20th May 09
Been out on the slow but comfy bike this morning. Good fun, only about five miles but doesn't matter, did a bit of golf practice as well but it was rubbish. Seriously thinking of giving it up.

Tuesday 19th May 09
Same as yesterday little three miler - doing weights and exercises at home though on top of the lil run.

Monday 18th May 09
Did a short one after yesterday's half-decent run - 3 miles up town and back was sufficient - have a bit of grief going on with my right shin that's a bit irritating.

Monday evening - finished work and made mesen get down that gym. 20 minutes of rower and then 21 mins of bike and job done enough for a monday.


Motionbased from Sunday's run
Motionbased was a pain in the butt yesterday and didn't seem to want to upload yesterday's ten mile run. When it finally gets it uploaded it says total time was 2hrs 22mins - it was nowt like that - the moving time is accurate (set off 7:15 back before 9am) so lord knows where it gets 2 hours plus from - think there's a gremlin designed to hack me off in the software. The good thing was that am back to almost 10 minute miles again at a decent distance! 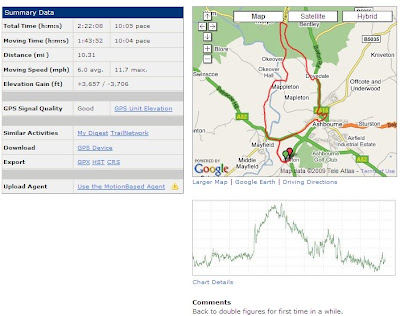 Sunday 17th May
Start as you mean to go on. After crappest round of golf ever yesterday I thought I'd better get back on the running training properly so with Missus off out shopping at 9:30 I got out and about a little after 7am.

Did a solid 10 miles in 1hrs 44ish this morning which was okay. Particularly pleased as I picked a hilly route and ran em all including the killer hill out of Mappleton towards Thorpe. Dead pleased about that.
Posted by Paul at 09:10 No comments:

Sunday 10th May to Saturday 16th

Saturday 16th May
Up early doors, quick run up town and back. Ton of work to do on the laptop so there'll be nowt more until golf in the afternoon I reckon.

Thursday 14th May
Back to the old routine - five miles this morning. The missus has got me a sports watchy type thing so am going to start timing mesen again I think - can't be bothered with the hassle of the Edge just for the morning five milers. Had a bit of jip in my knee when got out of car so am going to start doing some cycling on every other day I reckon.

Wednesday 13th May
Yay! Doggo goes back to his rightful owner today so back to running proper from tomorrow! Anyway same old thang - walk up town, run back.


Tuesday 12th May
Same as every day - walk up town, run back home with the hound. Only tomorrow then back to normal on Thursday and a five miler to get things back to reality I reckon. Same in the gym - 24 minute treadmill on hill program followed by 20 minutes rower and some weights - getting back into a habit - good, good.

Monday 11th May
Swear I've not slept properly since this darned hound moved in. Can hear it snuffling and blowing in the night. So up at 5:30. Walked a longer route up town and ran back again. Am looking forward to proper running again from Thursday after Charlie returns to owner on Wednesday - two more days to go!!!! Did a good session in gym again - 24 minute hill program on runner and 20 mins on rower and a bit of weights - all good stuff.

Picked up the Sky Box this morning so should be getting all Skyed up in the living room at the weekend (only the freeview chanels but it'll improve the crap reception anyway). Moderately pleased I think!

Sunday 10th May
Blimey a fortnight since marathon - feels like months already. Stupid mutt woke me up at 5:30 so walked the darned thing round a two mile loop, got back, got back into bed, couldn't sleep. Pesky animal - roll on Wednesday when I get my life back a bit...

Just won a sky digibox on Ebay for £5.50, hope it's alright - have got a quad adapto on our digibox so am running a sky+ box, our old sky digibox in Phil's room and am going to run another one to the dining room as the reception is tat. Excellent.
Posted by Paul at 11:23 No comments:

Saturday 9th
The now standard walk up town with the mutt but felt a bit tired so walked back as well for the most part with a few sprints to get Charlie working. Golf in the afternoon and a steady 88 with loads of silly dropped shots but zero shanks for a change. Have made my swing more upright and altered the tempo a bit to get it all smoother and that seemed to pay off today. Good stuff.

Friday 8th
Same old, same old. Walk up town run back, Charlie nearly took my arm off when he spotted a rabit other than that, same old routine.

Got to the gym in the evening - hurrah. Solid 24 minute hill program on treadmill to start - nearly wiped me out - still feeling the quads a bit. Then 20 minutes for 4100metres ish on rower - shower then back upstairs to see whether all hard work was paying off.

This week's been a bit of a ballacher in many respects (technical term) have been doing a lot of coding to integrate some data from a new territory into our existing reporting data. Wrote 400 odd lines of code today alone (it had to be done today) Anyway got a call from one of the guys in the office and apart from a couple of glitches it's all panned out nicely so that's a bonus - I worry about these sort of things all the time - capricorn, worrier it's part of the makeup.

Thursday 7th
Same as yesterday up town and back - walk up town, run back, only another six days and then back to normal! Me and Lucy did another mile or so with the hound in the evening as well.

Wednesday 6th
Same as yesterday me and the hound walked up town, ran back for three miles. Might get to the gym later all being well. Have started organising a holiday for summer so am getting excited - only Anglesey but a break's a break!


Tuesday 5th
I've got my old running partner Charlie Boy back. He's carrying a lot less weight than me so you'd expect him to be quicker (that plus he's a greyhound). Anyway we walked up town and ran back and it was okay. More pooper scooping than I'd have liked but that goes with the dog-owning territory I suppose.

Me, Lucy and Charlie went a 1.5 mile walk when got back from work. Spoke to Kathryn today and she said she did no running at all last week so am not so worried with how little I've done - I did get out and about on the bike so that's better than nowt.

Monday 4th
Went to a Christening yesterday so taken onboard too much alcohol in the festivities that followed. Did same 7 miles as yesterday but on bike as it was a bit drizzly.

Did nine holes of golf in the evening - not bad.

Sunday 3rd
Back to the attack! 7 miles I think will check it out later round Mayfield, Okeover Park,Mappleton, Ashbourne and back. Steady but not totally recovered yet - was feeling some jip in me quads (big four muscles in the thigh) after four miles but at least it's a start. Will mention yesterday's golf - terrible - 93 off the whites so a nett 78, not bad putting though I was pretty systematic with the putting and generally did a good job of that, just not hitting the ball far enough at the mo. Rubbish.
Posted by Paul at 10:27 No comments: