Got everything packed up and homeward bound by 11am. All good stuff I think. Unloaded car in good time for tea over at mum and dad's.  Pip chased the cat then peed in the bathroom - all good stuff.

Picture of me in the yakkety at Church Bay as always click on it to zoom. 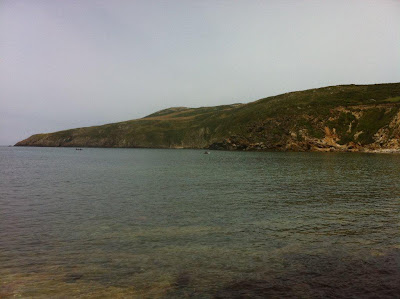 Monday 23rd July 2012
Realised I'd left laptop at mum and dad's so had to go over to Darley Dale before going to work which meant getting up a lot earlier.  Took the Pipster out for a walk, 2 miles okay first though
http://connect.garmin.com/activity/202194570

Out for food at Stepping Stones, Ashbourne which I really enjoyed but everyone else moaned about.  Never mind.  Took Pipster a last walk before Will came to fetch her away.  Aaahh.

Tuesday 24th July 2012
Up really early but not nearly early enough, 5:05 and Phil not gone to work.  Got him up, got his shed opened up for him, got him off to work like a bullet!  All good.   Got loads of stuff done - watered everything in sight if remotely green.  Did a quick run up town and back to fetch papers at 9:42 pace so not too bad all things considered.  Have got to sort Phil's bike insurance out today - did his car insurance last night - only cost just over three times  the value of his car (thieving sh*tehawks Insurance companies are - posh robbing bookies.

Wednesday 25th July 2012
Recovering from yesterday.  Played golf round Ashbourne with Mike from work in the hottest conditions possible about 300 degrees and zero wind which is extremely unusual in itself.  Golf details here http://connect.garmin.com/activity/202873891

Got back from golf, our Andrew was already at  ours.  Fitted some roof bars I'd got with a roof box that wouldn't fit on our Zafira so now he's sorted for Kayak transporting.

Got a load of boxes made to send out some golf clubs sold on Ebay.  All good stuff.

Into work in good time as usual.  Saw a top cartoon in paper this morning:

Made me laugh anyway.

Went to Stoke to look at a new car for the boss.  Put a deposit down.

Given ten groundsheet a bit of a clean and checked it's all dry.  It was okay so packed it up again and put it in shed!

Got to go up to clubhouse for 7:30 for captain's day presentation.  Have had an email from HowDidIDo.co.uk saying I've won so that's good enough for me!  The back nine for reference went par, quad bogey, par, birdie, par, bogey, bogey, birdie, par - best return I've ever had for back nine and front nine was a shot better starting with four boiges, then birdie on 5th, bogie on 6th, pars on 7,8 and 9!!  Awesome round. 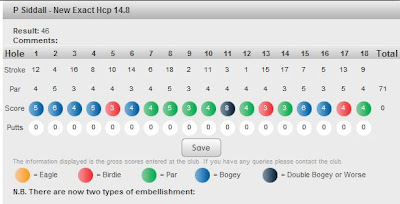 Above: round of 79, 46 points and handicap dropped to 15 unfortunately.

Monday 16th July 2012
Weather looking v. crappy so went up town in car.  Got everything sorted out, got to work early.  Think am going to go out on bike later tonight.

Wednesday 18th July 2012
Up early but not motivated to get out on road early.  2.5 miles again at around 10min/mile pace which I thought would turn out better really as I was did first mile in 9:38 or something like so wonder if I switched clock off when went in to fetch the paper or not?  Anyroad t'is what t'is.
http://connect.garmin.com/activity/200475764

Thursday 19th July 2012
Not a great day.  Was up til 3am doing archiving before I drew a line under it. Went to bed, got up at 3:45 and it was done, kept thinking it'll finish soon but I think it was a touch of the watched kettle never boils law coming into play.  Went back to bed at 4am and then got up at 7am, knackered and justifiably so!

Friday 20th July 2012
Went to bed early, got up late, got into work at 8am but well-tired.  Phil's birthday yesterday so we went out so didn't even get any Badminton done!  Never mind.  Here's a picture of me golfing trophy! 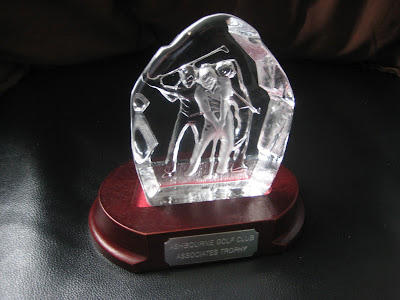 Saturday 21st July 2012
Going to take Kayak to Wales today.  Am leaving it there so that next week there's less to take when whole family goes.  We've got Pip for the weekend so Saturday started off with taking her for a walk then off to Wales.
http://connect.garmin.com/activity/202194560

Got to Wales went out in the Kayak for maybe an hour.  Didn't catch anything but it was glorious on the water!   Went fishing at night caught a dogfish but missed another bite.  Sea like a millpond didn't suit the bass (brother caught one the previous evening. 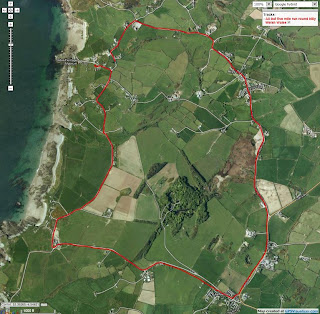 Went to fish a mark I'd scouted out in April called Ringbolt which is  near a mark called the range.  Rained on us, the rock turned to ice so not much fun.  Brother got a small pollack but that was is.  Anyway, it's ticked off the list now! 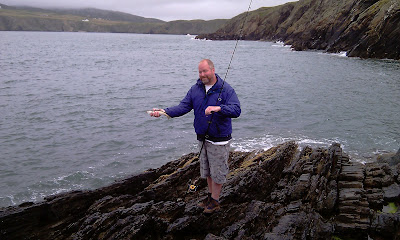 Fished the low tide coming in on the beach - 1 dogfish and 1 little bass, that kept us interested!   Nice end to the day after much sitting in the tent listening to the rain. 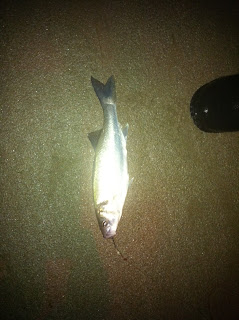 Monday 9th July 2012
Got up went down the beach.  Waited til lunch time no rain got tent dried out, got packed up got back home!  Had had enough of the weather! Took a smidge under four hours with kayak on the roof.  Got stuff unloaded and then spent a bit of time with the 303 spray doing the underside of the yak.

Tuesday 10th July 2012
Up at 7am to get Phil up.  His moped kaputted again so took him to work.  Took boss and Lucy to Derby shopping which was okay.

Thursday 12th July 2012
Up early doors, decent looking day according to XCWeather.co.uk so did a Cycle2Work.  Very good.
http://connect.garmin.com/activity/198368582

Cycled back, http://connect.garmin.com/activity/198682780 (includes a bit in the car when forgot to switch it off), tea, then Badminton with Lucy all good.

Friday 13th July 2012
Raining when got up so didn't run.  Have to stop late at work so might have a session in the gym.

Didn't have a session in gym, got away about 5:30 which was okay.  Got home and did some archiving mullarkey til 1am!!!

Saturday 14th July 2012
Got up at 4am to see if it had done. It had thank the lordie.  Set off the importer and went back to bed!!
Got up proper at gone 9am!  Fetched brekko when Phil got up about 10am.  Got golf stuff ready for tee-off at 12:30 and proceeded to have the best round of my life.  Even with three three-putts and a hideous eight on the 11th hole I still managed to break 80!  39 for the front nine and 40 for the back means a good chance of taking first for the Captain's Day Associate Member comp - had three birdies and don't know how many pars going round awesome!  Will update on end result tomorrow but reckon was a good eight shots below my handicap.
http://connect.garmin.com/activity/199790135

Is it me or does my route look like as a seal barking at the moon (not sure if seals bark but you know what I mean!).

Got back, kids all still asleep.  Started treating top of kayak with 303 Aerospace Protectant spray which combats UV damage from the Sun and also restores a little of the colour.  I think it's worked nicely. 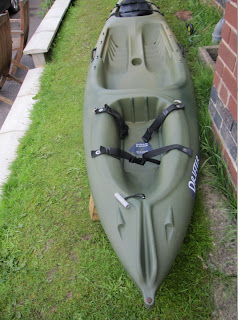 Hoping to go have a play on the kayak up at Carsington later. If Phil ever gets up!

Eventually he did.  We went Donnington Market when he was ready.  Then up to Carsington and it was grand. Phil, Lucy, mesen and brother Andrew all had a go and guess what?  It didn't even sink! 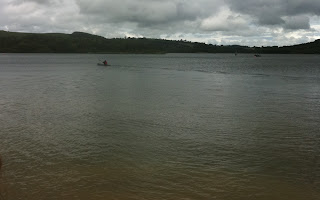 Have got a half width roof box to pick up tomorrow from Cheadle.  I met the missus at the Wayman at Threapwood - it's gone to hell in a handcart now:

I even remember playing there a couple of times supporting amongst others the Phil Littler Band!  Fame indeed!

Made a sort of paddle leash - its not perfect but it'll do for now!

Wednesday 4th July 2012
No exercise thus far.  Couldn't find any bloomin shorts.  Took Phil to work at 5:45, dropped his lunch off an hour later (buffoon). Into work for 8:20 funny sort of day so far, didn't mention it but it's 5 years and two days since I last smoked.  Am I over it yet?  No.

Thursday 5th July 2012
Went work at 5am as was leaving early.   Did work. Went to Lucy's parent's review, she done very well indeed.  Got back got loaded up with camping gear and kayak went Wales.  Marvellous weather when got there.   Fished evening tide - a flattie and a dogfish for my trouble.

Friday 6th July 2012
Weather gone bad!  Rained proper full on all day.  Got out on the Kayak good fun. 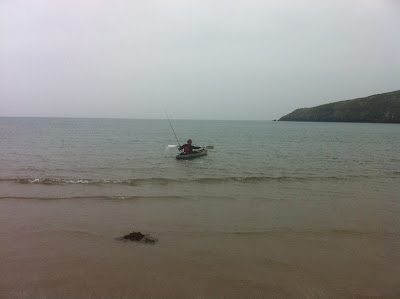 Went to Summit to Sea to look at some Kayak stuff. Lunch at the Wavecrest Cafe - very nice.  Weather cleared up a little so fished evening tide - dogfish city. 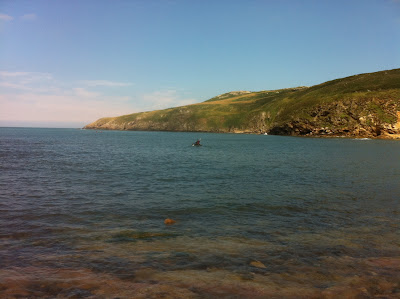 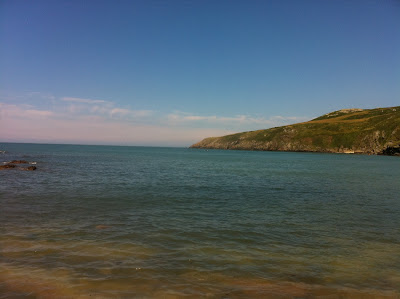 Went fishing at Llanbadrig - didn't catch owt but had fun none-the-less - saw porpoises for first time in Wales - you may be able to see them in the pics below if  you click on em to zoom.  They stuck about for maybe half an hour when the tide was really racing - not sure if they were after fish or what - we certainly didn't connect with any! 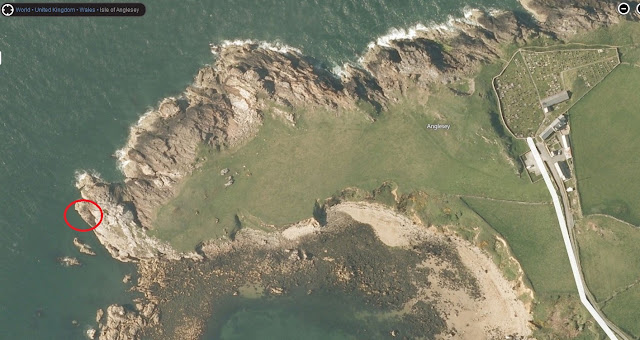 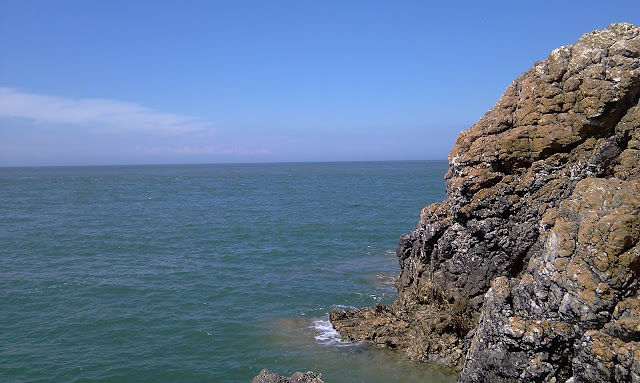 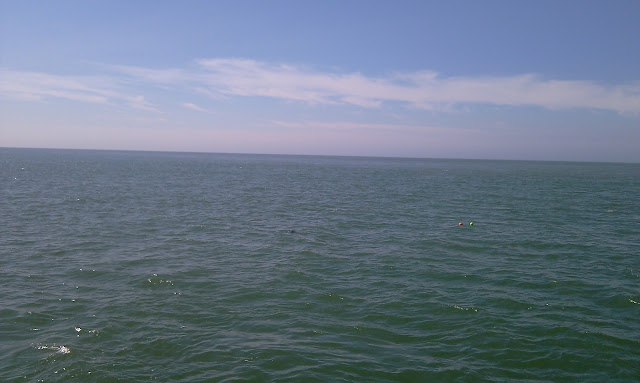 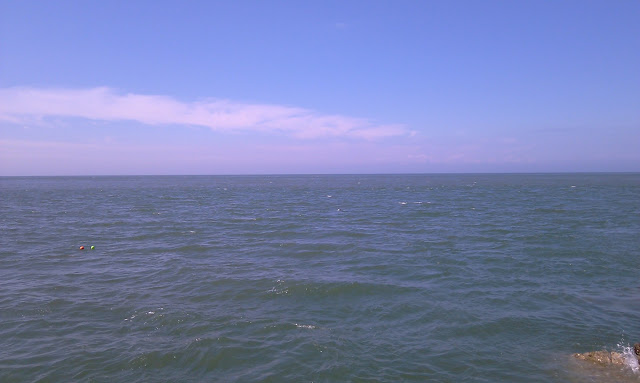 Barbecue to finish off at night.  Think we fished the low tide as well but only had marginal success.