No updates for a bit - Gone Fishin!! 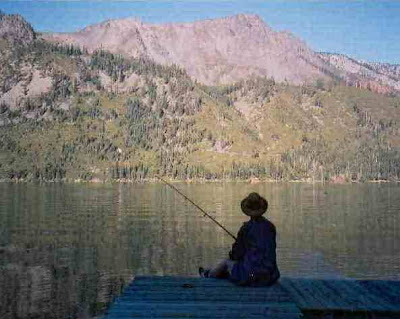 
Been a good run up town, about three miles I reckon. Then been getting stuff ready for a fishin trip. Yay!


Not much to report today. Just a walk up Snelston hill and back. Then took Lucy to see 'UP' at the flicks which is really,really good. Quite poignant too.

Tuesday 27th
Better, four mile run round Ashbourne picking papers up on way. Quite pleased with that!

Monday 26th
Legs as stiff as boards this morning so just walked up town and back. Three miles better than nothing I guess. Gym after work for 35 minutes was all I could do. Swimming did for me on Sunday I reckon.

Sunday 25th October
Am in a bit of fog about things at the minute. Am having one of my moods for some wierd reason (work I think). Anyway ran round Snelston and back picking up a load of chestnuts along the way. Thne spent next hour or so clearing the garden (we've had hedge ripped out ahead of a fence going in).

Me and Lucy went swimming around 11:30am (when we finished the pool was empty but for us and it was dead good!). We did twenty lengths each Lucy doing front crawl mainly and me limping along behind doing breast stroke. Anyway, was good to see Lucy going so well. In afternoon I polished off a bottle of red on my own (jeez Louise) but washed both cars as well so not too bad an afternoon. Was rotten seeing it go dark so early.
Posted by Paul at 08:33 No comments:

Saturday 24th October
Another bad night, got up at 4am and had a couple of ibuprofens and then things were a bit better. Took Phil to work at 6:15. Yay. Weather is dire so not sure what am going to be up to today. Well golf went to hell in a handcart so that was that. But, as had a few hours to spare I thought I'll go to the opticians so did that, left eye has got a couple of steps weaker but the optician lady said to expect that (way she talked you'd think I was 60 not 40 and a bit!).

Friday 23rd October
Woke up with mega pains in my ribs again so just hobbled along two miles up town and back today. Didn't get to gym, had a really bad day and by 6 o'clock I'd had enough, frankly.

Thursday 22nd October
Got up early doors and got down to the Gym at Celtic Manor - did forty five minutes split on treadmill and exercise bike - very good Nautiless kit including the U916 bike which unlike the machines I'm used to doesn't need to be connected to mains. Then a hotel breakfast which probably wasn't ideal then off to do the business and then back up the motorways to Derbyshire. Funny sort of a day and missed Janet's group.

Wednesday 21st October
Same 3.75 miles as yesterday! Cool, set the Giant FCR1 up last night, four lights it's got on it so should be well-seen when riding into work on Friday morning. On road for Caldicott tonight so will see what tomorrow brings. Well forger what tomorrow brings, ended up having a few beers before getting to bed at Celtic Manor Resort Hotel. Very Nice.


Tuesday 20th October
Solid run for a change - 3.75 miles steady as a rock no stops other than to get papers and tie up a shoe lace. It's coming back! Am off to Caldicot for work tomorrow, stopping over at Celtic Manor and then coming back Thursday evening so have got plans afoot that unfortunately don't include golf but will include riding to work to fetch car back on Friday morning all being well. Am going to be waking the sleeping Giant FCR1 for it's first outing in nine months!! Yay. 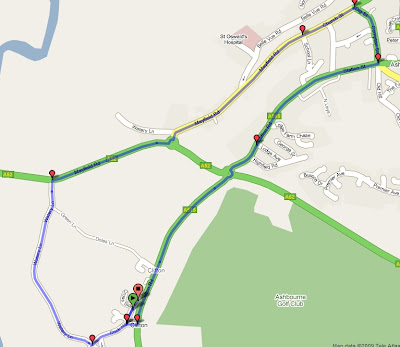 Monday 19th October
Another 9 hours plus of sleep I reckon (bed before 8pm and up before 6am). Went out with the base layer first thing and am so pleased am going to get another one! Only the usual dash up town and back but am getting better at it which I think following yesterdays up hill and down dale run shows signs of fitness returning. Pleased at the mo. Good gym session after work - 15 mins on rower, 25 mins on bike.

Sunday 18th October
Tested the base layer our this morning that I got from the mighty Aldi for a tenner and it worked very nicely. Need to get me self a bit fitter to test it over longer distances but this morning I did a comfy three miles, stopped to get a load of sweet chestnuts over towards Norbury and never felt cold once. Could have done with a size smaller in the bottoms really but you can't have everything. Went to bed at 7:30pm yesterday and had fifteen minutes short of 12 hours sleep. Awesome. Think it's just what I needed. 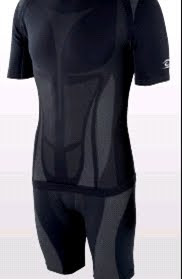 Saturday 17th October
Been to Lumbards to fetch bike bits back from Ashbourne. As alluded to earlier in the week the Incognito aka slow and comfy bike has shot it but I had a couple of good years out of it I suppose. So am looking to treat myself come Christmas all being well. Don't tell the missus.

Golf very hit and miss unfortunately, hit some belting drives and got 7 pars overall including four on the trot on the back nine but only scored 26 points off a three quarter handicap stableford with about five blobs along the way so not sure what to make of it all.

Friday 16th October
Yay, no rain. Ran up town and back to start the day, didn't get to gym. It's been a grind all October so I though sod it and went to Aldi instead. Have got a base layer for running in the Winter. Am going to give it a go Sunday all being well. 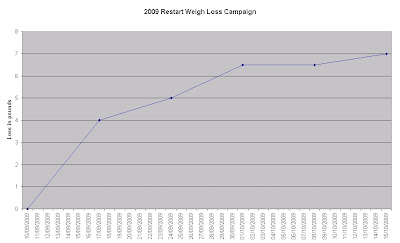 Had a frenetic day (which I don't mind, don't get me wrong) then went to Janet Carey's group in Alfreton of which I'm a member. Only lost half a pound but that's took me to a half stone in about 5 weeks (with one non-attendance due to being in Guildford). Perhaps more realistic for me to aim for a stone by Christmas rather than two stones, am not committed enough really but at least I've not put any weight on in the few weeks I've been back. Feel like I'm letting Janet down a bit but my head's still not quite there, won't be long though am getting it back slowly.

Wednesday 14th October continued.
Did a 2 mile walk in the evening while England game on - couldn't see em losing so no need to watch!

Just been looking into my diary for November and have got to give a presentation to the Environmental Committee (I may have got their name slightly mucked up but such is life) on the Cycle2Work scheme. This is a government-backed scheme which encourages employers to offer a sort of cycle hire service in which both employee and employer get tax breaks on purchase of a bike and safety gear. If my bid is successful I've got my eyes on the Giant Roam 2 (pic below - click on it for a bigger image) which is like a hybrid with 700c wheels with wideish tyres but front suspension too to make it a bit comfier. We'll see how successful my presentation is. Am already canvassing folks who I think might be interested. We'll see!! 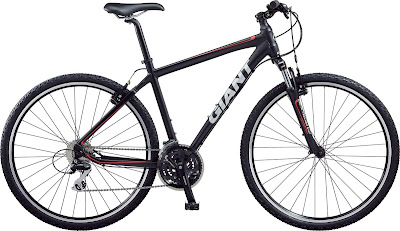 Wednesday 14th October
Raining when I got up so into gym first thing. That's better. 45 minutes, treadmill, rower, bike, shower. Good. Just been contacted by one of SW's top Consultants Ursula who has come across my blog in setting up her own - check it out at http://slimmingworldstneots.blogspot.com/ you will rarely come across someone as positive and empathetic as Ursula - she's very good indeed as thousand of successful slimmers in St Neots will testify.

Tuesday 13th October
2.5 miles up town and back again, running a bit better, right knee was giving me a bit of jip but seemed fine today. Went 2 mile walk in the evening which was okay as had another It Bites album arrive off of Ebay to listen to.

Monday 12th October
Ran up town and back to start the day off. Got to work and have left most of my notes at home. Bugger. Walked up golf course in the evening and it was gorgeous, went dark quick though.

Sunday 11th October
Not done much really - got up at 5:45am to take Phil to work again. On a Sunday!!! Glossed skirting board in bathroom, regripped a set of irons with sharpro multi-compound grips I got off Ebay for £16! Wrote up minutes from a meeting on Thursday. Did nine holes before it went dark and played much better.
Posted by Paul at 07:46 No comments:

Saturday 10th October
Took Phil to work at 6:00am again. Grand. Walked to Sides Mill and back to get some more chestnuts -still waiting for the first frost I think but got some. 18 holes of golf in which I struck ball well but putted like a fool. So things are improving.

Friday 9th October
Had to drive over to Darley Dale and pick my dad up to drop him off at work to pick a car up I bought off the fleet for him (he paid - it's complicated!!). Then, work so no exercise again. Then at 5pm one of my guys deletes a table (or as good as) so ended up being here til 7pm. Great start to the weekend.

Thursday 8th October
Been to Guildford today which meant getting up at 5:30 and not getting back to the office 'til gone 6:30 so didn't get anything done of note and didn't get to group either but I'd already let Janet know so not end of the World. On the scales at Head Office I'd only lost a half pound but that still equates to half a stone in first month which is better than nowt.

Wednesday 7th October
Ran up town and back to start day off. Still can't get out ot bed in a morning. It's doing my head in. Have been in bed by 9:30 every night at well.

Tuesday 6th October
Hacking it down with rain. Went gym instead 40 minutes done. Better than nowt!

Also got Gym member of the Month award for September which was nice! Fifteen attendances in a month is most I've done before so quate pleased am I.

Monday 5th October
Got up mega early to finish off a presentation which absolutely did me in for rest of day which was bad as had a presentation to do!! Never mind. Did a two and half mile run early doors which was as much as could do. Felt a whole heap colder this morning. Not a good sign!

Sunday 4th October
Not done much, took my dad to look at cars in morning. Took Lucy another Chestnut gathering walk which was less successful than previous day but at least the tree has been ticked off my list.
Posted by Paul at 19:56 No comments: