Wednesday 1st February 2012
Run up town and back after doing some prep for DMs meeting presentation
http://connect.garmin.com/activity/146744158

Monday 30th January 2012
Knackered again but up just after 5pm. Finished off reading Stephen King's 'Bag of Bones' last night which was really good, ought to keep a record of what I'm reading. Also read Ford County Stories by Grisham in January - that was okily dokily too. Anyway, got the missus up and then a slow run up town and back. http://connect.garmin.com/activity/145837429

Tired as seems usual. Wanted to do a big run but could only manage a slow 9 miles.
http://connect.garmin.com/activity/145837427
Sorting out a BT Fon connection issue for brother-in-law Jimmy took a fair bit of time but turned out to be a weak receiver in his Laptop really. Said I'd have a look for a booster thing I've got somewhere.

Tuesday 17th January 2012
Got up early and got out on the road not long after 6am. Did five miles and back for just before 7. Thought it felt a bit better but still only averaging 10:45 miles. It'll get better though. First night of alcohol free nights this week last night so that's one out the way! Also did a 2 mile walk round last night as well looking at the stars before watching the rather good Stargazing Live which had the last chap to walk on the moon on it and such a nice bloke he was too.
http://connect.garmin.com/activity/142422691
Monday 16th January 2012
Watched the excellent Sherlock til 10:30 so not up bright and breezy decided I walk up town and back after doing the big run yesterday. Didn't explain the two section approach to the run - I tried to split it into two halves so could stop and have a drink halfway - 500ml of finest lucozade sport to be precise. Getting old I am, you know!
http://connect.garmin.com/activity/142160109
Sunday 15th January 2012
Got up pretty early (mind you went to bed about 8pm as well). Damned Watch crashed and was stuck at 6:40 so had to go run without Garmin assistance so had to manually map out how far I'd gone. The intention was to do 12 miles but I was having to guesstimate and ended up coming a little under three quarters of a mile short having done 6.51 miles in part two of the run and 4.78 miles in part 1 of the run. I had a two section strategy in mind from the off - with home being the start/end point in both case I did the first five mile'ish run around town so it was street-lit not that it was really needed as it was well frostily moonlit this morning. Then did the nice run round Mappleton in early sunlight - was unbelievably cold but that's what it should be this time of year. No idea of pace - still rubbish so if was to put money on it I'd say I was averaging 11 minute miles which as keep saying is okay at my age and weight!
Part 2 summary and map the nice countryside bit: 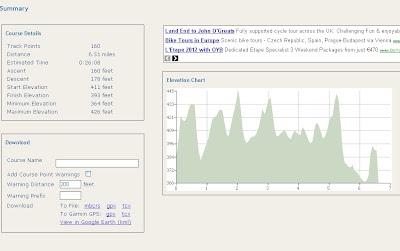 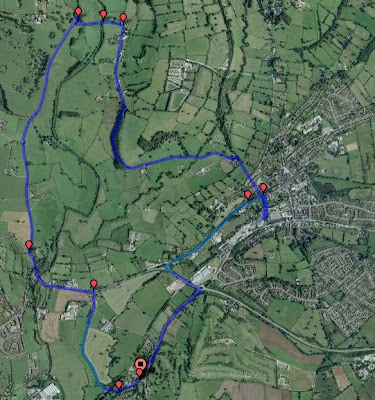 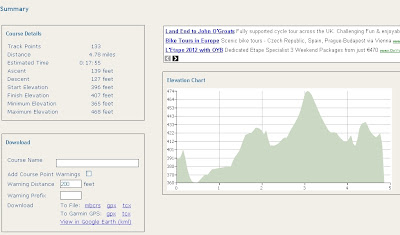 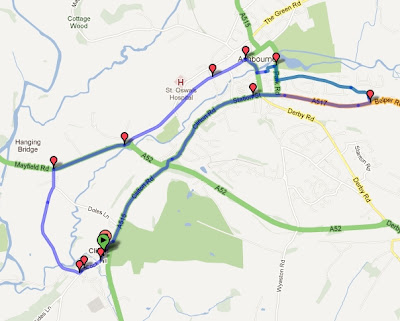 Saturday 7th January 2012
Saw Phil go first thing then back to bed. 15 holes at lunch time at 10 over, really good front nine at just four over finishing par, par, par, birdie which was solid but lost a bit of momentum on the back nine. http://connect.garmin.com/activity/140247937
Friday 6th January 2012
Went to bed dead early last night so got up super early this morning. Watched Phil go, there was a concern about Frost but it was okay so he went on his ped. Wind had dropped too. Going to be putting things right tomorrow morning - there's stuff blown over all over the spot at the moment. Did a just short of three mile run this morning which was okay - still not sure bout the new trainers maybe they need bedding in.
http://connect.garmin.com/activity/139246225
Thursday 5th January 2012
Up early watched Paul go in the howling gale bless im. Had to drop my parents off for a flight out of Manchester Airport so got into the office for just after 7am so I could leave early. No run - wasn't fit to with the wind and rain so wasn't too bothered about not running. Was knackered at the end of the day - went to bed about 8pm! Wierd, must be getting old!!!!
Wednesday 4th January 2012
Up early again, got some bits and bobs done. 3.5 mile super slow run, battery ran out on watch which was my fault - something to sort out later. http://connect.garmin.com/activity/139246223
Tuesday 3rd January 2012
Up early, saw Phil set off for work at 4:30, went back to bed, stayed there. Back is giving me hell today wityh the rain as well I decided to leave it.
Monday 2nd January 2012
Up with the lark at 5am got some bits done - could have gone a bigger run I suppose but didnae. Anyway, 3.33 is a magic number and that's the number of miles I did. So more than I generally ran last year but lordy were my legs tired? Am not sure bout the new shoes I have to say but will give them a few more miles before deciding whether they're not for running in.
http://connect.garmin.com/activity/138214025
Sunday 1st January 2012
Start as you mean to go on. Up a bit later than usual but not to worry, it's a Sunday. 6 miles - just under 11min/mile pace. Yes, it's slow but two factors to consider - a. alcohol over xmas and b. breaking in some new birthday present shoes - Saucony ProGrid Guide 2's - will see how get on with them I had some ProGrid Omnis a few years back and they were excellent so hope these will be similiar. http://connect.garmin.com/activity/138214022
Posted by Paul at 12:00 No comments: