Wednesday 29th February 2012
Missus' birthday stuff. Went to Cherry Tree Farm near Burton for lunch it was a bit much really.

Sunday 26th February 2012
Gutted, me little dog's gone back to her owners, never mind.  Been out on the bike for 7 miles this morning and do I know it!   Around about 12 mph average I think so some fitness work to be done for sure.
Off to Costco in a minute to get the boss's birthday cake.
Bike Ride: http://connect.garmin.com/activity/153351392
Posted by Paul at 10:44 No comments:

Saturday 25th February 2012
Missus went to London I think.  Didn't do much on the Garmin anyway!

Sunday 19th February 2012 to Saturday 25th February 2012
Nothing much to report.  Went to work Monday and Tuesday to do recruitment training.
Took the Pipster hound many many walks and picked up many many shats as you do with small dogs.
Played golf with John on Friday went out in 40 and came back a bit worse at 45 but 85's a score I can live with!!  Went shopping to Uttoxeter on Wednesday and Burton on Friday - love shopping.  Oh yeah.
All good not really done much exercise as the Pipster took over.
Dog walk http://connect.garmin.com/activity/151356725

Friday 17th February 2012
Tired but up earlyish.   Good job too Will rang from the farm to ask if Phil could come in early as someone had rung in sick.  So woke the spangler up and sent him off. Ace fun.
Ran up town and back in my useless way.  Not very quick and forgot to start watch up after getting papers but still did the distance none-the-less.
http://connect.garmin.com/activity/150150886


Thursday 16th February 2012
Didn't get to bed til silly o'clock last night so up at 6am this morning.  Problems with XpressWeigh meant getting into work early.   No run but badminton tonight.


Wednesday 15th February 2012
Up early!  Run up town and back http://connect.garmin.com/activity/149712401
Took missus and friends to see Wanted in Nottingham - sat in car waiting for em then took em home again.

Stopped at work till 7pm trying to sort out problems with America.


Sunday 12th February 2012
Got up at crack of dawn, fell to sleep on sofa last night at 8pm so went bed early as usual.   Worked on someone's grandson's laptop took all day to get it connecting to the internet - at 10pm ish I found out it was bloody Norton Internet Security so totally uninstalled it.  Sort of tramped a five miles very slowly at 7pm - am full of cold at the minute.  http://connect.garmin.com/activity/149293071

Saturday 11th February 2012
Sort of ran up town and back.  http://connect.garmin.com/activity/149293067
Started sorting someone laptop out.  Went to Costco - no cheaper than anywhere else you know (excluding Harrods where everywhere else is less expensive.

Monday 6th  - Friday 10th February 2012
Not much to report on. Busy as hell at work getting up early doing an hour going to work.  Getting a bollocking for booking time off when there's training going on. Cancelling time off. Getting phoned up from work at 10:30 at night, working til 2:30am and not getting thanked for it - the usual really.  Not bitter. Not a bit bitter. Wednesday slow run http://connect.garmin.com/activity/149293066

Sunday 5th February 2012
Well, yesterday was fun and games.  Golf cancelled, John thought it too cold and I reckon he wasn't far wrong there.  So went over Darley Dale with one of them battery booster things to get mums car going.  It got it going but unfortunately not well enough.  In my wisdom I thought take it for a spin and charge the battery up.  It was too far gone unfortunately and gave up on me on Moor Lane.  So left it there overnight, brought the battery back to sunny Ashbourne and got the beggar on charge.  So to Sunday, 4" of snow overnight didn't look like a running day that's for sure. 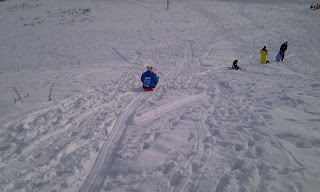 So sledging in order I thought to start with, coupled with lots of snow-shifting; clearing the snow over at school and on the drive. Loads of fun, and then some.    Then when it looked okay, drove over to Darley put the re-charged the battery in mums car and got the beggar back home. Cripes what a weekend.  DCFC v Forest was supposed to be on telly but got postponed due to snow outside the stadium.