Sunday 26th August 2012
Bad weather forecast for Monday 27th so this was to be the last day of short trip.  Kayaks out and messing in the surf - pretty hairy stuff - very nearly got tipped out in the waves but the Ocean drifter does not tip easy so stayed up. Lovely day, shame to be going.  Got home for about 5pm.  A bit of jip on way home with CreamFields being stopped early for safety reasons the roads were full of scallies in sh*t-up motors and slowed us getting onto the M6 in a hurry.

Monday 27th August 2012
Did bugger-all all day really.  Weather was very wet again. Took a load of stuff to recycling, took a load of golf balls up to Ashbourne Golf Club for the juniors.  Fastened the sunflowers up - they're getting on for 10 foot tall now so a bad wind could do for them.  Went to bed at 8pm to catch up a bit.

Went up to Stanton-in-Peak to put some flowers on uncle Peter's memorial.  Down to Rowsley to try and get Lucy some new school shoes and failed.  Got some camping stuff from Field and Trek (which used to be  Sportdirect.com).  All good.  Bed early.

Wednesday 29th August 2012
Up early. Took Phil to work.  Took Lucy to see 'The Three Stooges'  it was cracking like Vic and Bob on speed.  Golf in the afternoon - nine holes with John and Doug - shot 42 to get 17 points off a three-quarter handicap - must be getting better - there were five pars in that!
http://connect.garmin.com/activity/216673934

Got some big boxes to set up a one person minimalist camping box to just chuck in when needed.  Think am going to get another little camping cooker to finish things off.   So spent much of evening get things sorted for a final one man expedition to Wales.  Hopefully, Phil will be coming next weekend and then that's it!

Off to Wales for weekend - bit of fishing first night - caught nowt, brother got a really decent bass and two whiting.  Bed late and a slightly drunk.

Saturday 1st September 2012
Up fairly early, brekky in the tent! 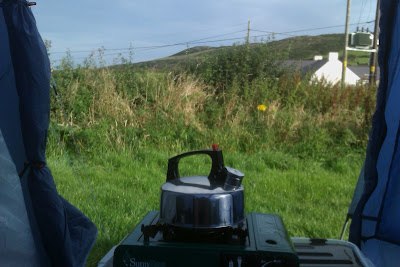 Walk to Llanfaethlu and back.  Battery low warning on watch so only got the direct walk to it 1.75 miles.  Went the long way back along the road to Borthwen then along the coastal path to Church Bay.
http://connect.garmin.com/activity/218243835

Sunday 19th August 2012
Well, the day I'd been dreading for months came.  Had the Belper Rugby Rover to run.  Up early, at Belper for 7:30. We set off with the walkers at 8am so we could get it done before it got hot.  Was absolutely done by 8 miles in, didn't start well when twisted ankle a bit about half a mile in.  Could have been better!  Anyway, it you're fit it'd be a good run for most if you're not it's a bit of trial!  Some beautiful views I have to say and lots of places I'd not seen or knew existed so in a way it was good. That said, it's bloody painful at the time of writing. I blame that Kathryn - it's like the Grindleford Gallop - she should have added "only more so" to the end of that statement!

Watch ran out of battery monday morning so here's an image of the route that we more or less took.  I'll post the actual garmin connect stuff tomorrow.

Update:  it took 4 hrs 13mins in actual fact,  so very slow but am really not that bothered it was a big old climb and a long way in the sun.  In short it took it out of you.  When I'd done the marathons in 2009 and 2010 I had something in the tank to up the pace at the finish, I'd got nothing left with four miles to go and was literally running on empty!! 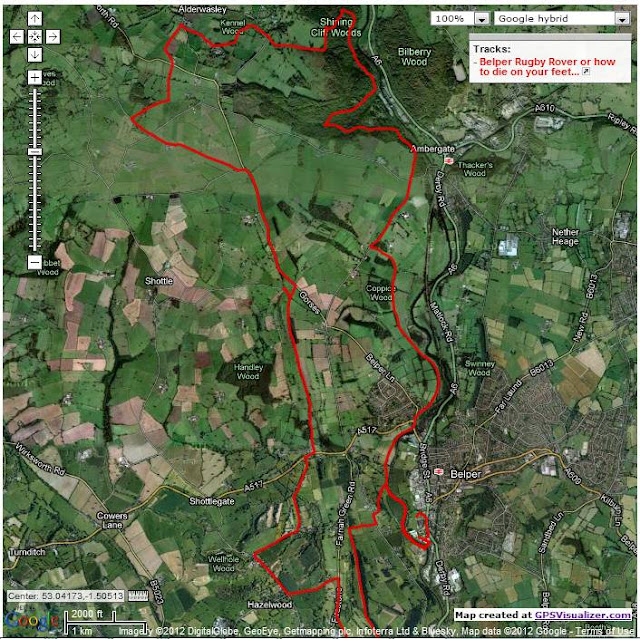 Monday 20th August 2012
Woke up cream crackered.  Took Henry out for a bit of walk.  Bugger he is and no mistake - only got him for a week which is probably as well as he's severely curtailing training and everything at the moment!

In Consideration
Am thinking about doing the Ashbourne Half Marathon on 16th September at 10:30.  Probably end up doing a fair bit of walking as there's loads of hills involved but the views would certainly be something!  I ran my first half marathon distance way back when  along much of this route so know how steep the bit up to Bloore Meadows is - have never run up the hill to the mile 1 marker though have always come down it!
http://www.fetcheveryone.com/route-781091 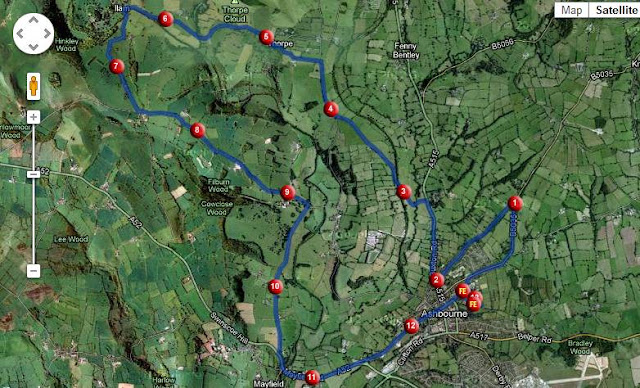 Tuesday 21st August 2012
Up early, brought the old Giant Stonebreaker to work to see if anyone wants it. It's fully functional but I've no space for it. Took Henry for a slow, slow walk - he's a good sort really but headstrong and stubborn when you want him to go in his big cage at bed time - you have to con him into it with a treat.  Never mind, had a MacAdee breakfast as felt I'd earnt one.  Still feeling it in the legs following Sunday's exertions.

Left work at 5:15 over to Ashbourne, thunder and lightning, 6:10 tee off and weather turns out to be fine!  Forgot to set watch off til almost to the second green so not a complete record but something none-the-less. Greens had pools on them which made for an interesting nine holes - started off well par, bogie, bogie really steady then started playing crap put a ball in the field on the fourth, three putted on fifth, same on sixth, into trees on seventh, three putted again on eighth and finished with a bogie on ninth so blobbed on about four or five holes and lost a poond to Doug.

New water hazard on the first: 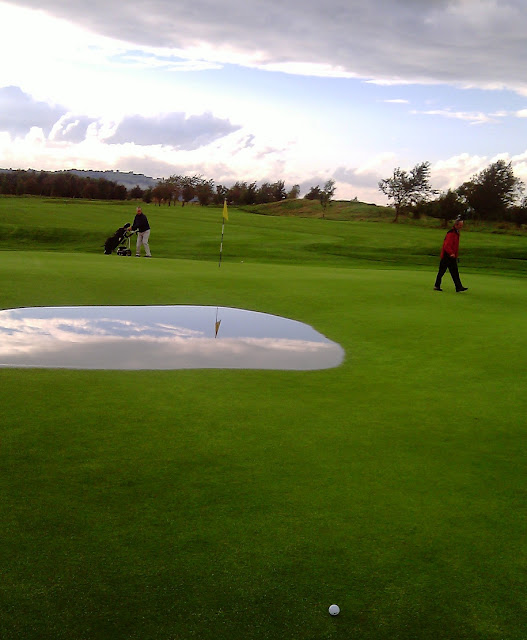 Wednesday 22nd August 2012
Up early as usual. Took the biffer out for a walk all. Into office, everything running a bit later than I'd like due to the hassle of the hound.   Never mind.   Dropped me phone at work which I could have done without - got to see if can get a replacement now.

Thursday 23rd August 2012
Up at 6.10 - bit of a lie-in.  Took hound out for a very slow walk. In work in fairly good time.  Debating whether or not to go to Wales - weather forecast is awful so logic should say no but it's also almost inevitable that we'll go anyway!!!!!

On way to work I took a minor detour have found a free car park for Cycle2Working so am going to be doing that from next week again.

Friday 24th August 2012
Funny old day, took the hound out.  Work early, finished early, took hound back to owners.  Went to Wales at gone 5pm, got there at gone 9pm! Tipping it down the weather was.  Got settled in, no fishing thunder and lightning and holding 13 foot of carbon probably not best of ideas

Saturday 25th August 2012
Took the boss shopping.  Pottered about on beach - went fishing 11pm!   Brother got two bass on first two casts - I got a single Dab but at least didn't blank!

Wierdly enjoyable as the scenery on the run is beautful, that is undeniable. 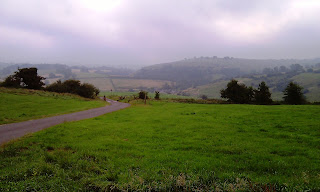 
Monday 13th August 2012
Think I deserve a rest day so had brekko and then into work early!  On saying that am not hobbling about like last week which is nice!

Tuesday 14th August 2012
Picked me dad up and then went to t'other side of Bradford for two days golfing at Hollins Hall courtesy of the kind folks at work. 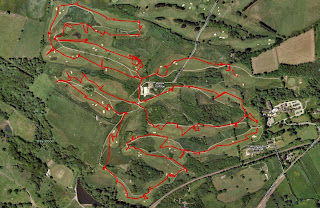 Finding my way round the first day - scraped round in 97!!

Wednesday 15th August 2012
Decent breakfast at Hollins Hall Marriot then some more golfin.   Took a nine on the ninth which wrecked the card but think went round in 94 with a couple of lost balls - am going to upload the round from freecaddie pro in a bit then I'll have some stats!!!

Me dad pitching over the bunker to the green on Holling Hall signature hole called guess what... The Viaduct.  Can't imagine why.

Me dad and I on one of the tees - lord, it was a slow day on the links.  4hrs 15 minutes to go round, about 50 minutes longer than the previous day I think. 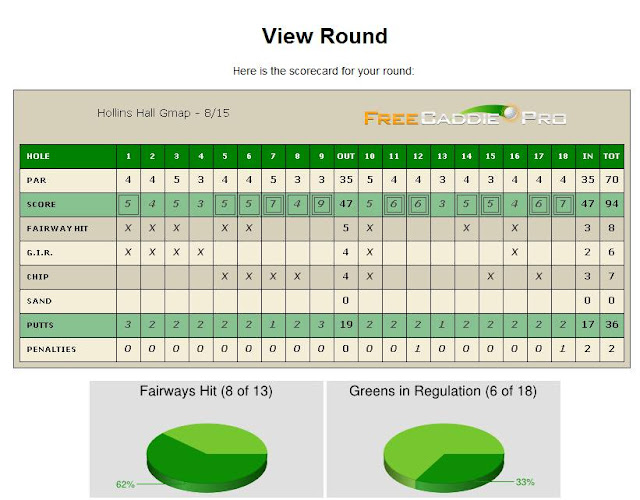 Saturday 18th August 2012
Bit tired this morning.  Went to bed early enough but got up at 4am to take Phil to work.  He's sorted his ped out now so should be able to get a couple of hours extra tomorrow morning before the big run.  Retirement beckons thereafter I reckon!

We're dog-sitting again this week - a bit of a biffer this one though, a full-on bulldog called Henry.  We'll see how that goes!

Got cars washed.  Trip to Uttoxeter for an angsty late lunch, shopping back home.

Monday 6th August 2012
Up early'ish.  Run up town and back to get papers.  Satellite tracking was all over the place though so no meaningful data to get from it!
http://connect.garmin.com/activity/207246467
Got all mowing done which is turning into a bit of a pig.  All good.

Wednesday 8th August 2012
Woke up very tired.  Managed a walk up town and back.  Watered all the tomatoes and stuff then off to work.  http://connect.garmin.com/activity/208001179
Harvested some of the spuds and a bit of gardening done in the evening.

Thursday 9th August 2012
Got up nice and early - got Phil up who seems to be happy to be working all hours when he should be revising for his theory test.  Couldn't get going but eventually got out on the road for a quick paper run up town and back.  http://connect.garmin.com/activity/208360688

Did three miles of golf as well later on but watch started saying low battery warning so only first mile or so is recorded - played quite well really though could do with a bit more practice really.

Saturday 11th August 2012
Sort of a rest day but walked up town ahead of Derbyshire vs South Africa tour match at Derby.  Dropping Phil off for his theory test as well which he passed bless him.

Went on hols to wales.  Did lots of fishing, kayakingand drinking, no running (will have to catch up on that pretty darn quick!).  Went to Amlwch, Cemlyn Bay, Penhros Coastal Park, fished Cemlyn, Borthwen, Church Bay.  All over the spot really. 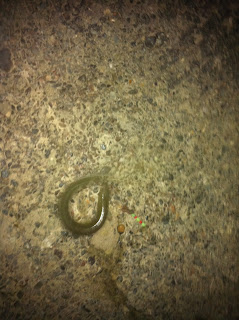 AJ caught a common eel amongst others. 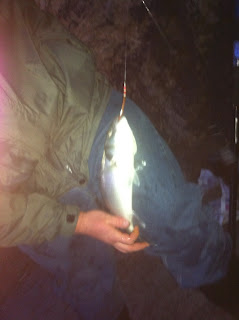 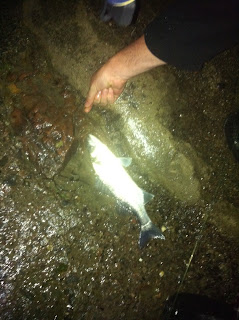 PJ caught a schoolie bass as they're called. 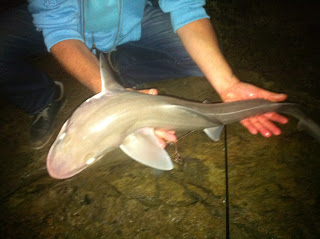 AJ also caught caught a smooth hound which was a first for us!

While we was there saw a Cinnabar moth at the side of the road - never seen one before pretty looking thing:  http://en.wikipedia.org/wiki/Cinnabar_moth 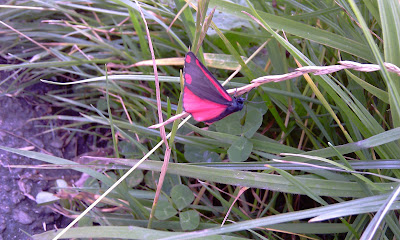