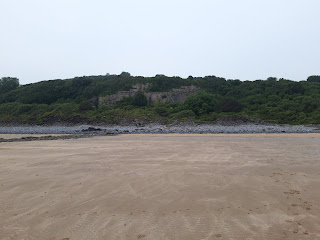 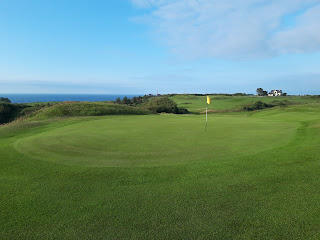 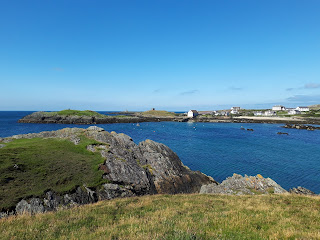 Sunset on the beach.

Thursday 27th June 2019
Missus going out day.  After breakfast took the pooch for an away day.  We went to Ynys Y Fydlan which is a lovely walk from a remote car park.   Picked up a load of plastic from the beach and while doing so the dog decides to roll in some stinky muck.   I should have chucked her in the sea but didn't think of that at the time.   Got back cleaned her up with a bucket and a cloth.  Bloomin hound.  Went a walk to the end of the headland with the dog and a fishing rod.  When I got there I thought

Saturday 29th June 2019
Wedding anniversary - survived not initially having a card!  Rehearsal with the band - went okay worked out some misunderstandings on endings which was grand.   BBQ when I got back - worked a treat - everyone happy.

Sunday 30th June 2019
Up early.  Dog walked etc.   Went to Birmingham to see Lynyrd Skynyrd and Quo.   It was supposed to be Phil's present but he was too busy so we ended up taking his mate Lewis.  It was alright I suppose.   Got home very late perfect preparation for going back to work. 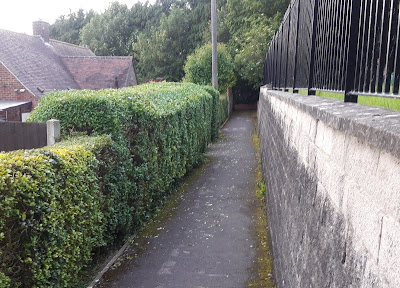 Then out to walk big lad only went for a mile or so as I was knackered. 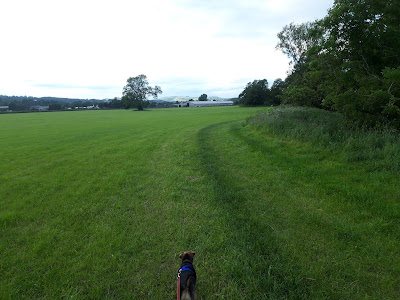 
Tuesday 18th June 2019
Up at 5.20 - didn't sleep well.   Dog walked, papers fetched.  Set off for work without me wallet so had to go back.  Got to top of bypass and found out road was closed so had to re-route through Belper.  Still got in on time. Missus gone to see Westlife or Boyzone or somesuch in Nottingham so took Lucy out to tea.  Weather turned bad after work.  Managed to walk big lad in the rain but that was about all got done.

Wednesday 19th June 2019
Up early.  Dog walked, papers fetched.  Another busy day in the office.  Went straight to Lotty and strimmed it to death after getting an inspection complaint email from Lotty Committee.   Next door neighbour was there too - she'd had the same email!   Did a bit of weeding too so that was nice. 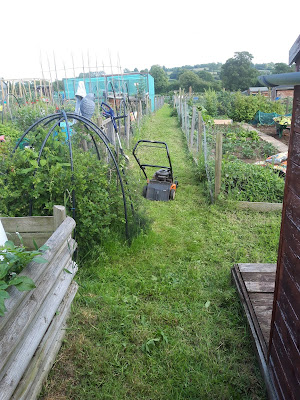 Then went home for tea.   Then took Big Lad and Lily for a walk with Lucy - quick mile round then onto strimming and mowing at home.  Have got three more days to get everything that should be in the lotty into the lotty.   No pressure!

Thursday 20th June 2019
Up early.  Dog walked, papers fetched, into office for 7.20am.  Back from work.  Had to take big lad for a walk first.  By time I got back it started to ruddy rain.  Never mind.    Watched the rest of What we do in the Shadows - it was ace!

Friday 21st June 2019
Didn't wake up until 5:40, knackered!   Dog walked papers fetched.   Into office on time though so no great problem.   Went to WW in the morning - 2.5lbs off so a bit better - on hols next week tho so it will probably go back on!

Monday 10th June 2019
Up early.  Dog walked then off to work.  Looks like being a wet one.  No walk at lunchtime.  Such is life.  Got home and it rained and rained and rained.   Did some website work and then when rain slowed down a bit took the big lad up to the cemetery and back. T'was all I could do!

Tuesday 11th June 2019
Up at 5:05.  Short walk for the dawg in the rain.  Papers fetched and then off to work.  All good stuff. Non rain all ruddy day so only short walks for dogs when rain permits.  CharityPub Quiz up at the Cock Inn - we came third - whoop whoop!!

Wednesday 12th June 2019
The usual in to work after walking Pooch. Busy day then off to Nottingham to finish bringing Lucy out of Hampden street.   All good, tea at Wetherspoons too.

Thursday 13th June 2019
Up a bit later than usual - 5.20am.   Long slow dog walk, papers fetched.  Into the office.  All grief as usual,.  Back home - quick tea and then took Dawg to vets - she's okay is the short report - thank heavens.     Back home, quick walk with little dog, quick walk with big dog, off to Cricket Club for Defibrillator training.  All non-stop go.

Friday 14th June 2019
Late again - 5:30am can't be helped.  Proper tired.  Dog walked, papers fetched.  Into the office early doors.   WW - half a pound on again.  Rubbish!  Weather crap again.  Took big lad a walk in between rain showers but am getting a bit sick of this wet June mullarky.

Saturday 15th June 2019
Up early, dog walked, papers fetched.  Did some tidying up of sheds to get Lucy's stuff put away.  Then at noon off we went to the Slimming World 50th Anniversary Awards at Birmingham ace.  Sat Nav got totally baffled by changes to roads in middle of Brum but our recent knowledge of Birmingham arena came into play and we got to the hotel in plenty good time.  Wetherspoons for Lunch then off for photos with MMB.   Grand, saw no end of folks I'd not seen for a while.  Do at night time went okay - the meal wasn't my sort of thing but then again it rarely.  A double Gin and Tonic and a lager cost me £18.30 - said I'd need to sort out a second mortgage before I came back for another one.  Robdogs.;  Hey ho. 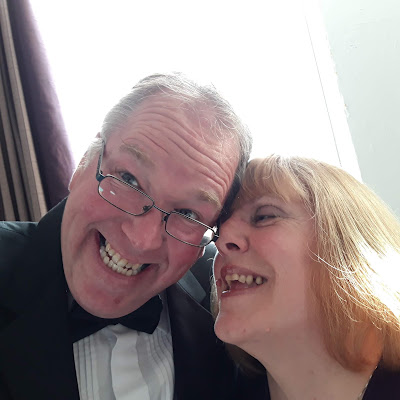 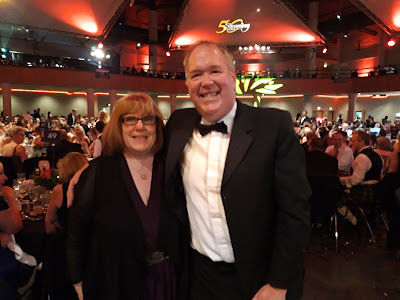 Monday 2nd June 2019
Up early, dog walked, papers fetched.   Into work for 7.30 - dentist later on - not overly happy about that but such is life!!  Dentist got done - not back now until January - good!   Took lily for a very short walk as she wouldn't go and then took big lad down to the lotty to do a bit of watering and weeding.

Watched a couple of episodes of billions - strange, strange programme.   Was hoping to watch the last episode of Chernobyl but it wasn't available so will catch it in due course.

Tuesday 4th June 2019
Up early as always.  Dog walked, papers fetched although lost Tuesday's Times voucher somewhere so not got that - can still read it online though so not end of world.  Into office in good time.  Firing off emails from 7.30am  After work it was chucking it down with rain so did a bit in the greenhouse and then when it stopped raining about 7:30/8:00pm I took the big lad out for a walk which ended up being nearly four miles - I paid a debt off which was good.  Stayed up until 00:40 to make sure that Lucy got home from a party.

Wednesday 5th June 2019
Up at 5.10 - about 4.5 hours sleep - very tired indeed.    Dog walked, papers fetched into the office for 7.20 everything still on rails even though I am totally knackered.

Thursday 6th June 2019
Up early even though am off to the cricket.  Dog walked Papers Fetched.  Getting on the Swifty Bus to Derby at 7.20, then on the Red Arrow to Nottingham getting there a bit before 9am to find out that Chris and Rich's train was delayed so went to the Joseph Else ~Wetherspoons (I think) for breakfast.   Walked from there to Trent Bridge and good days cricket (West Indies vs Australia, boo hiss) was had. 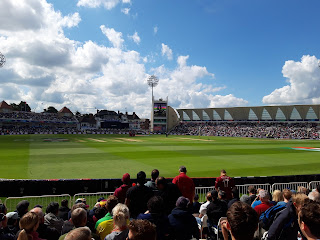 After game walked up into town met up with Lucy and took her for tea to Annies Burger Shack which very nice but perhaps a little bit too much food.  Never mind!!  Red arrow back to Derby and then got missus to pick me up!

Friday 7th June 2019
Up early - as always.  Dog walked, papers fetched the usual.  Attended WW - another pound on.  Such is life - you can't eat and drink everything in sight and expect to lose!  After work a nightmare began.  Little dog put her nose under someone's fence and an alsation grabbed hold of her - blood everywhere, three teeth hanging out and off to the vets we go.   Adam at Blenheim Vets did a brilliant job and we were able to fetch her back a couple of hour later.

Saturday 8th June 2019
Stopped downstairs with the little dog until about 3.30 - she was sleeping fine I couldn't do though so shuffled off to bed.   8am off to group - lost a pound at Slimming World - what does that mean?  I don't know.   Rehearsal with band at 12, said it would need to be a shorter one than usual due to dog situatioin.

Sunday 9th June 2019
Up early, still very tired.   Dog walk then off to Rowsley car boot.  Didn't buy much.   Popped over to me mum and dads for a coffee and to see how they were then over to Nottingham to bring a load of stuff back from Trent University as Lucy has now finished year 1.  We couldn't get it all but got a good chunk of it.   Photographed the Mapex and put it on eBay for sale.  Got to be done - have got too many drumkits at the moment. 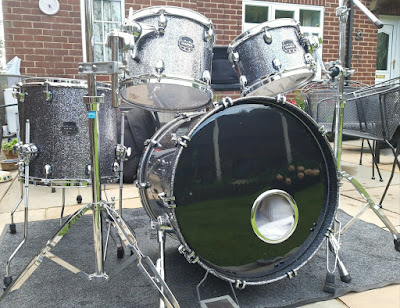 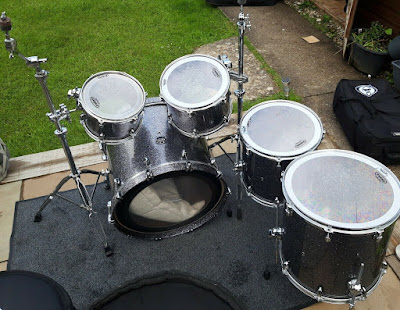