Have put a pound on this week somehow. Feel like I've been good but somehow not lost anything. I was 14st 6lbs first thing in the morning which would have been a one pound loss but by time for weigh-in this had risen to 14st 8lbs which is the opposite of how weight went during the day when I set out. One thing's for sure I need to change something to get the weight going in the right way again.

Did a chart in Excel to map total weight loss against time - clearly shows that for the last few weeks my weight has pretty much flat-lined at 60lbs loss (around the 14st 7lbs) apart from that week in Mallorca. Still have ten bloomin pounds to go though. 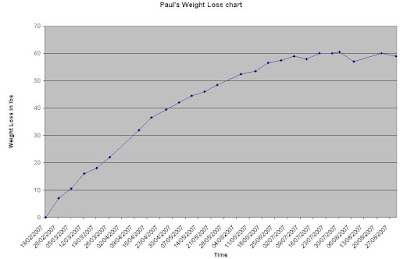 I ought to be happy with losing over 4st but am being a 'big girl's blouse' as me mum would say! Makes me think of a Bill Hicks (r.i.p.) quote I saw recently -

Think I'm being Eve a bit on this! Here's the full stats table: 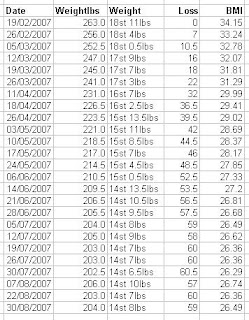 Bloomin eck have spent half a rotten hour on this post - am losing it, I tell you!

6am and there's ten mile of road out there waiting. Catch you later. Big old food diary post this evening to come.