Tuesday 24th October 2017
Up at 4am couldn't sleep.  Cleaning shower room ready for decorating.   Work for 7:30am.  Got home about 5pm.  Got the decorating head on and give it some in the shower room.

Wednesday 25th October 2017
Can't believe it's pay day again so soon. Amazeballs.  Up early.  Did some patching up in the shower room but in reality it needs another coat in a lot of places so that's tonight's job.  Busy day in the office, all good.  Then took me dad, cousin and cousin-in-law to Thornbridge Brewery for a tour and it was reet good.   £7.50 and I thought great value for two pints of expensive beer, glasses and all sorts.    Reet good.  Back home for 8.45pm and into decorating mode again.   Slapped another coat on the bits that were a bit naff and I think it will do for now.   Lesson to be learned is not to use old paint. 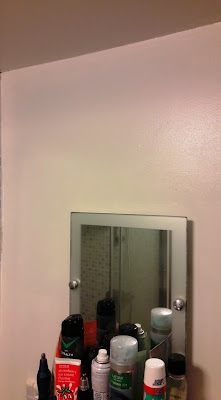 Thursday 26th October 2017
Up and about at 5am.  Shave, shower get ready.  Bins all emptied etc.etc.  Into the office for 7am - cooking on gas. Missus has sent me a photo she took while walking dog on Church Bay beach only a blooming seal!  Apparently RSPCA had been out to it the previous day which is what the blue spray is all about.  She said it waddled off to the sea so hopefully found it's mother. 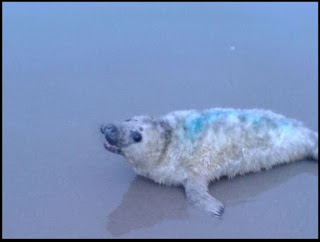 Finished work at 3pm and drove to Wales - took ruddy ages queuing all over the place.  If you set off at 3pm avoid Stoke is what I've learned - will do Congleton way next time I reckon.   Went fishing in the evening with Lucy's best mate's family - I chaperoned em to the mum catching two dogfish and poor old Chum (Jack) catching nowt.   Oh dear, never mind.

Friday 27th October 2017
How's this for odd!   Drove all that way to Wales and then drove back to Conwy (well as passenger) the following day to play at Conwy Golf Club with the Chester Golfing Society that Paul is a member of.  Cracking fun, played great first 8 holes with a birdie and a couple of pars then played wrong ball on 9th and it was downhill pretty much from there!  Never mind gorgeous course in great nick.

Saturday 28th October 2017
Drove back home - wouldn't have minded an extra day but not to be.  Stopped at Newborough Forest on the way back.

Sunday 29th October 2017
Ruddy clocks gone back so first thing was to change all the analogue clocks. Then set about finishing the painting off in the shower room so, a little bit of extra on the walls here and there and then painted the wood work including painting the little cupboardy thing that sits under the sink which came out grand.

Can't remember much of the week apart from being really busy.  Upgrading the drumattic computer to have Cubase Elements 9 on it for £40 and getting a load of brilliant drum sounds and doing a fair bit of tinkering up there.

Thursday 19th October 2017
Set off down south to take Lucy for her Falmouth University Campus Tour.  First part of journey was getting to Somerset to stay over in a Travelodge.  Chucked it down with rain and into storm Brian for most of journey so never got to 70mph - 3hrs 40minutes.   Didn't sleep too well due to wind blowing a hooley - Lucy didn't sleep too well due to me having a damn good snore when I did nod off!!

Friday 20th October 2017
Woke up in Somerset.  On the road and in Falmouth about 3 hours later after a quest to find food that was somewhat frustrating but we go some in the end.  In Falmouth about 11:30, two hours until tour so we went down to the town to have a look around.

Finished by 2:30 on the road, 300 miles to home done with one stop and a hold up on the M42 for half an hour due to some poxy coach breaking down in the inside lane.  Eejit.

Saturday 21st October 2017
Up early, dog walked, car set up for travel (again!),  Paddys do at lunchtime then off to Wales.  Arrived in the middle of storm Brian and it never let up all night.

Sunday 22nd October 2017
Weather calmed a little overnight and became quite nice by end of the day.  We had a trip to Trearddur bay.

Tuesday 3rd October 2017
Had an audition with a band called Goodfellas in Stoke - really nice blokes, great guitarist but they contacted me day after to say they couldn't rehearse any further south due to keyboard player being from Congleton.

Sunday 8th October 2017
Did some community service scrubbing down benches and picnic tables then painting them with wood preservative paint stuff with the Parish Council.  Then came home and painted the inside front fence.

Monday 9th October to Friday 13th October 2017
Really busy at work so no time.   Did some drum practice up in the attic.  Have fixed the computer which kept switching itself off in the attic - the fan was full of dust and rubbish so will have to remember to hoover it out from time to time.  So have got my recording facility back in place and getting some practice in.

In the evening we did a gig at Mayfield Memorial Hall for a charity event - went down well, raised over £2,000 and threw in four new songs - Highway Star, Fool for your Lovin,  Free Fallin and Knocking on Heaven's Door.   One (Heaven's Door) a request on the night which we had a listen to in the interval and then banged out.  All good stuff. 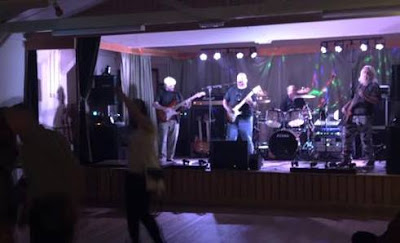 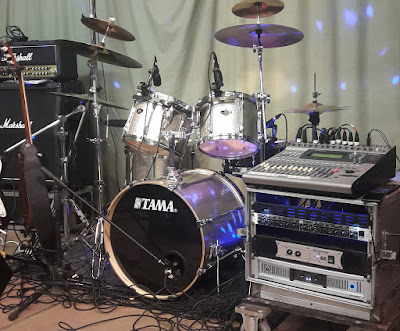 Saturday 14th October 2017
Up early considering didn't get to bed until nearly 3am.  Dog walked, papers fetched, unloaded Phil's van of drums into my car of drums.  Good stuff.  Rehearal/Audition with a band in Kilburn which unfortunately took place in a room with the worse acoustics I can recall but was okay.  We shall see.

Sunday 15th October 2017
Up early.  Dog walked.  Cars washed. Watched Derby do Forest 2-0 at Pride Park.  Lovely.   Over to mum and dad's for tea for first time in ages after Lucy's footie team kept Buxton to a 0-0 draw which is great as they have thrashed Ashbourne in the past.  Good, good.