Monday 30th March 2015
Up at 5:30 due to hound barking.  Dog walk. Papers. Into office for 8am.  Massive job to get done but at least have got a four day head start.  Going to be working over Easter though.

Up early not slept all night due to bloody wind.  Never mind.  Dog walked papers fetched.  Watering the plantation.

Wednesday 1st April 2015
Up at 5.45 a bit tardy but knackered, such is life. Dog walk, papers.  Usual watering regime.  Bit nippy today 3 degrees according to the car. Into office for a bit after 8am.
Done FIT meter reading and sent it in.  A bit late - need to set a reminder. Doctor's appointment in the afternoon.  Bit bizarre as there were two P Siddalls in the waiting room - the other one being a senior citizen whom I've had a mistaken dentist appointment in the past with but quite funny to see two Mr Siddall's stand up for one appointment.  Blood pressure is a bit raised so have to see GP at end of month.  Got home.  Tea.  Dog walk as soon as damn rain stopped.  Then did a bit of potting taking some of the tomatoes and cucumbers out of the heated propogator and putting them into a tray.  Going to harden these off properly bringing them in at night and taking them out in the morning for a few days. 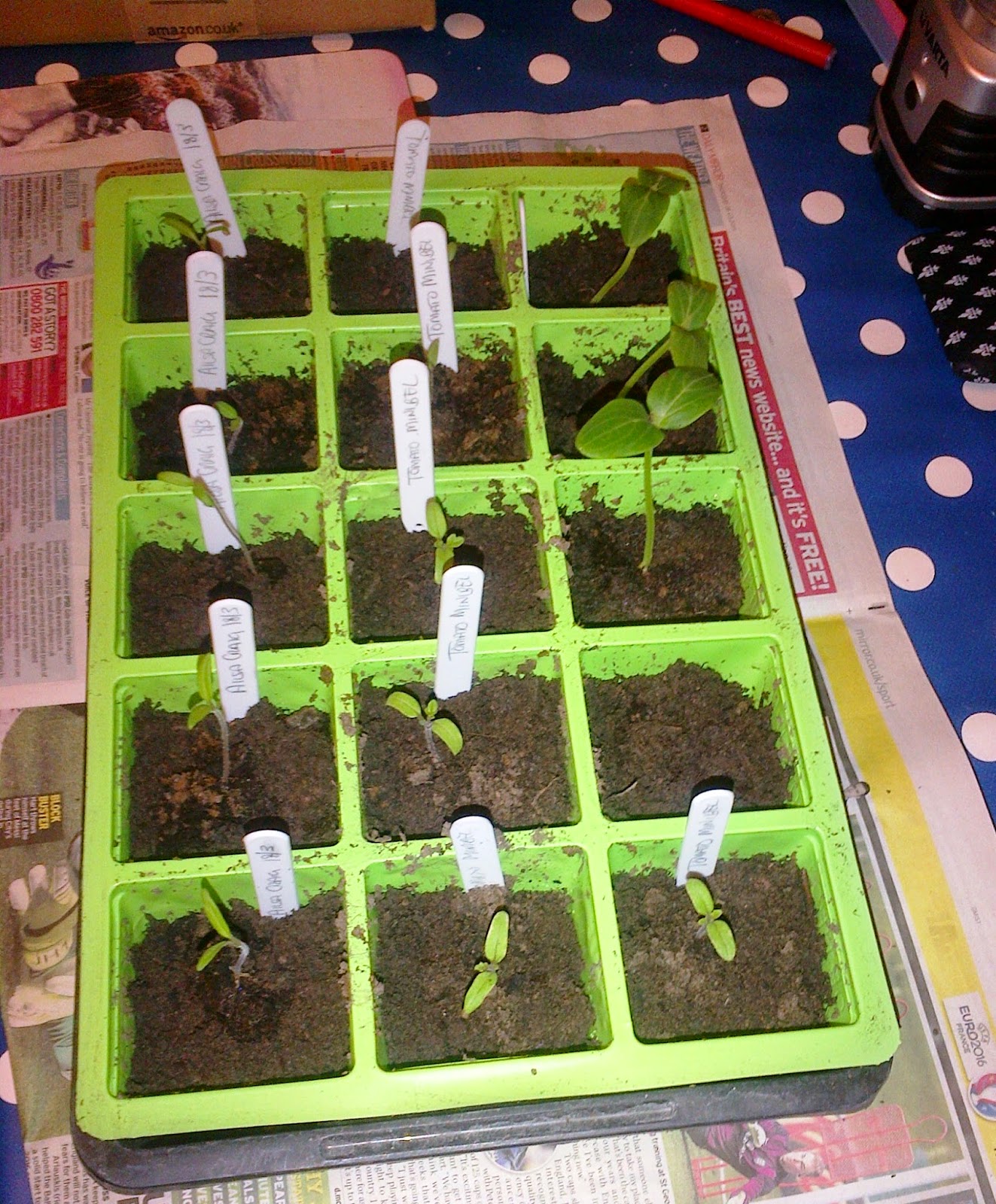 Did some webworks, watched Bluestone 42, bed a bit after 10pm.  All good stuff. 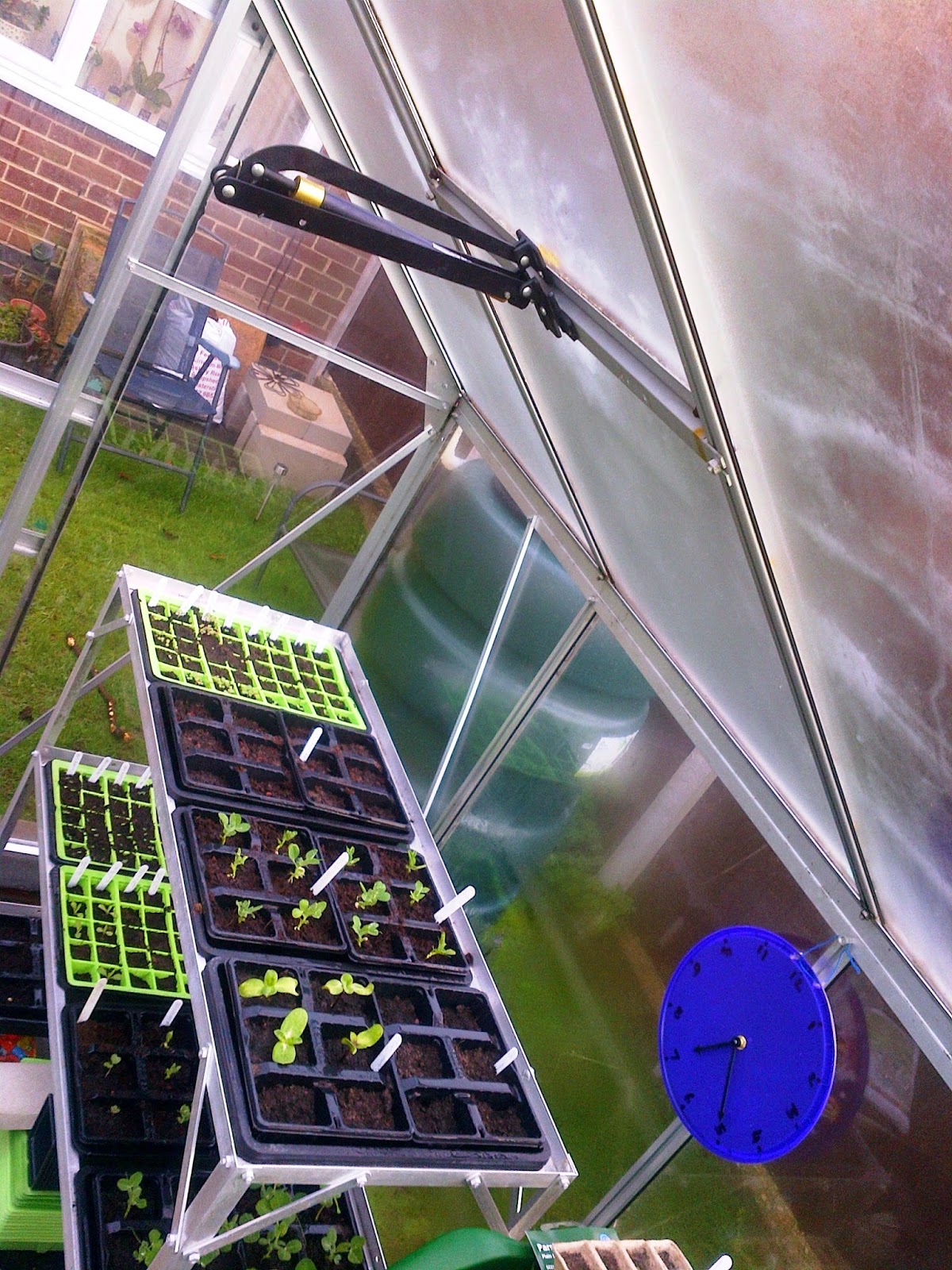 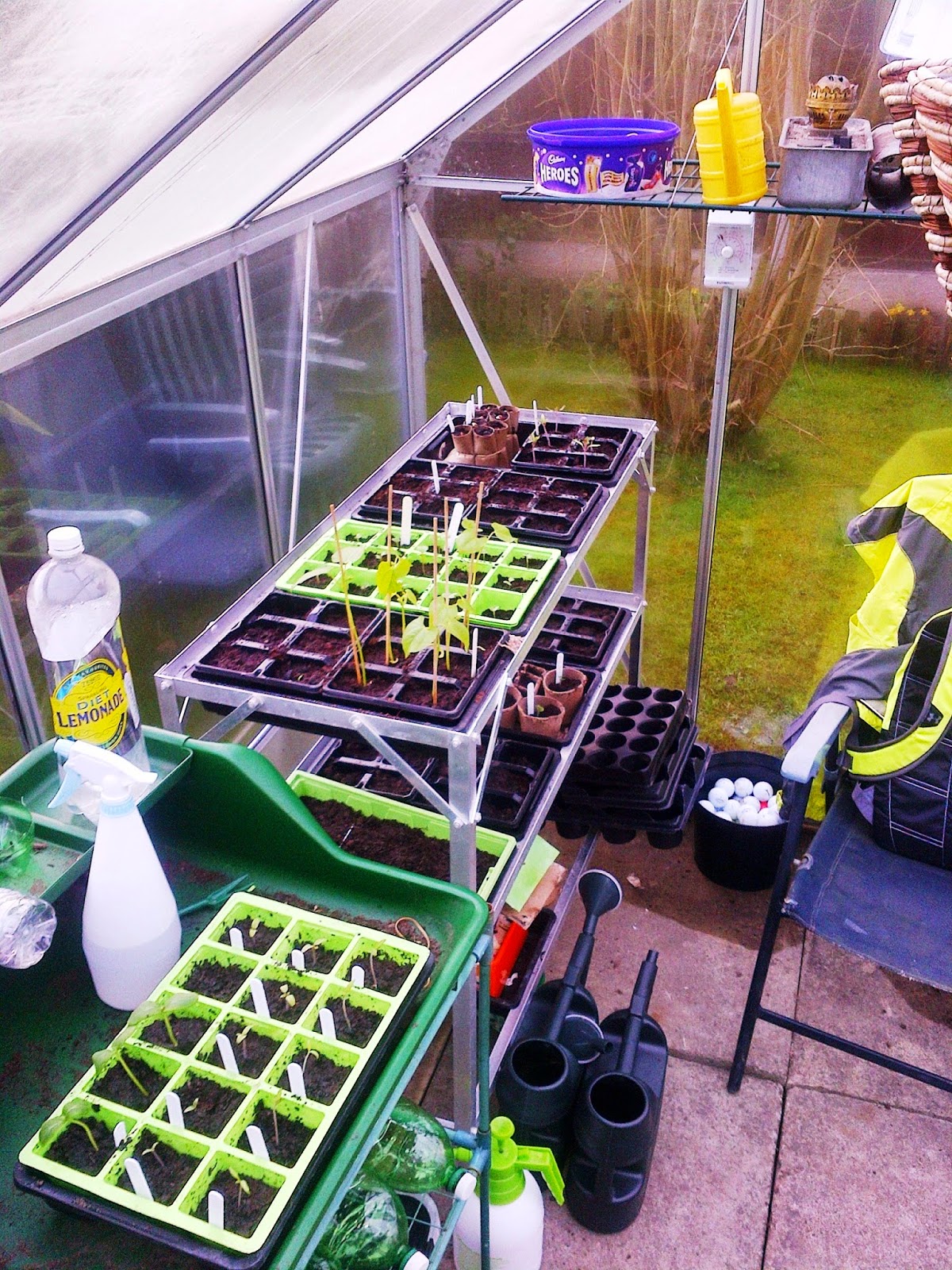 Work for 8.15am,  Long torturous day trying to get a big job done.  Easter's cancelled I reckon.  Got home, tea, dog walk.  Did some more seeds - am hardening off some tomatos and cucumbers so brought them in out the greenhouse.

Friday 3rd April 2015
Up early. Dog walk, Papers. Shave. Shower.  Brekko.  Water plantation. Office for 8am. Cold coming.  Derby gave away another win but in a way a draw against Watford is not the worst result in the world.

Saturday 4th April 2015
Up early. The usual. Piccy B, papers, walks.  Down the lotty put the strawberries in even though feeling lousy.  Got two metre squareds sort of ready still waiting on the boy to get me some muck down there. 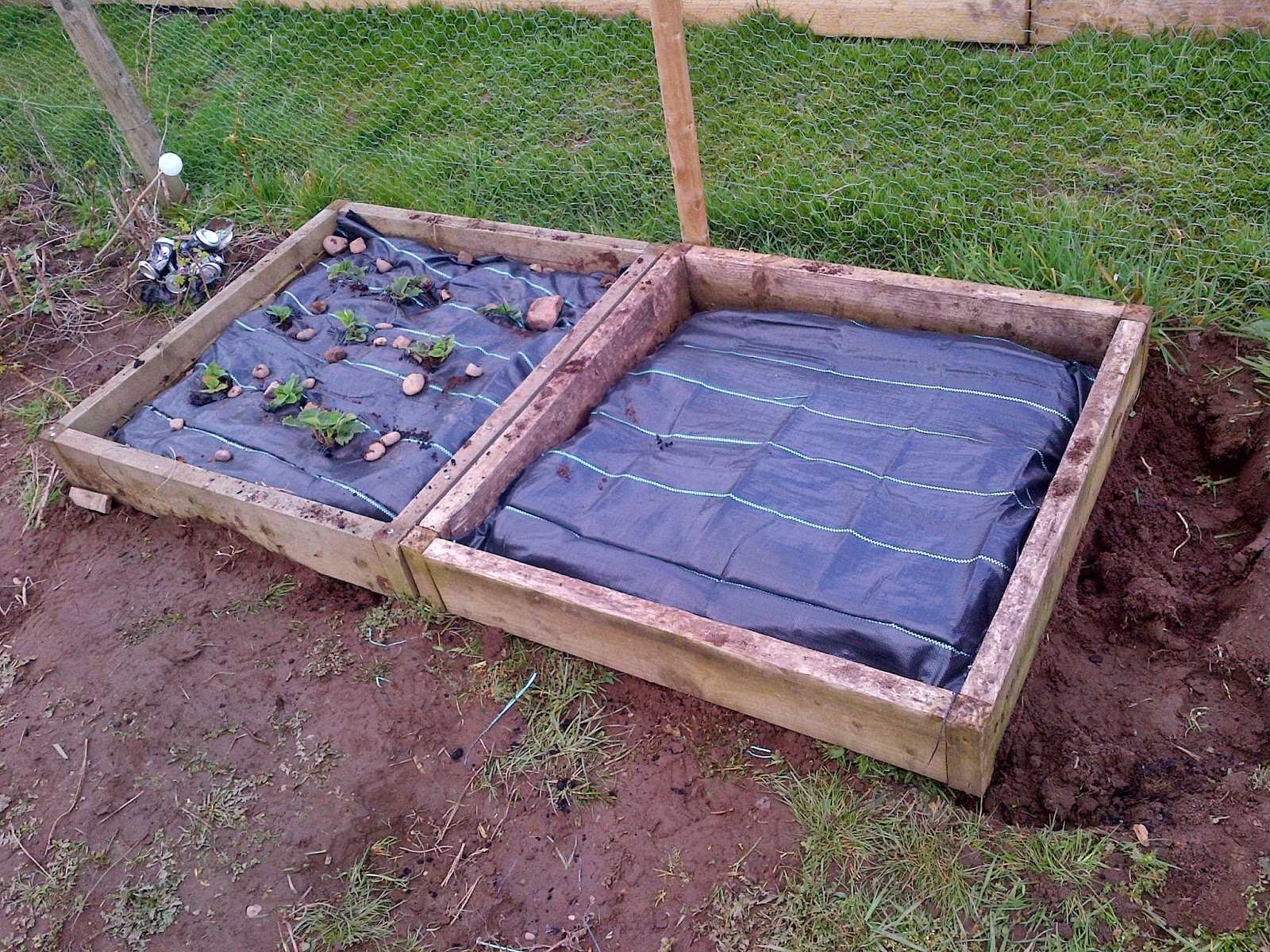 Only spent an hour down there had to be done.  Took three bags of rubbish down to the recycling in the wheelbarrow too.

Sunday 5th April 2015
Up early. Dog walk.  Helped boss a bit with sorting out dinner with visit from ma and pa and Paddy.  All good stuff. Feeling worse.  Took pooch a walk round the field climbing the hill was like climbing Everest talk about hard work. 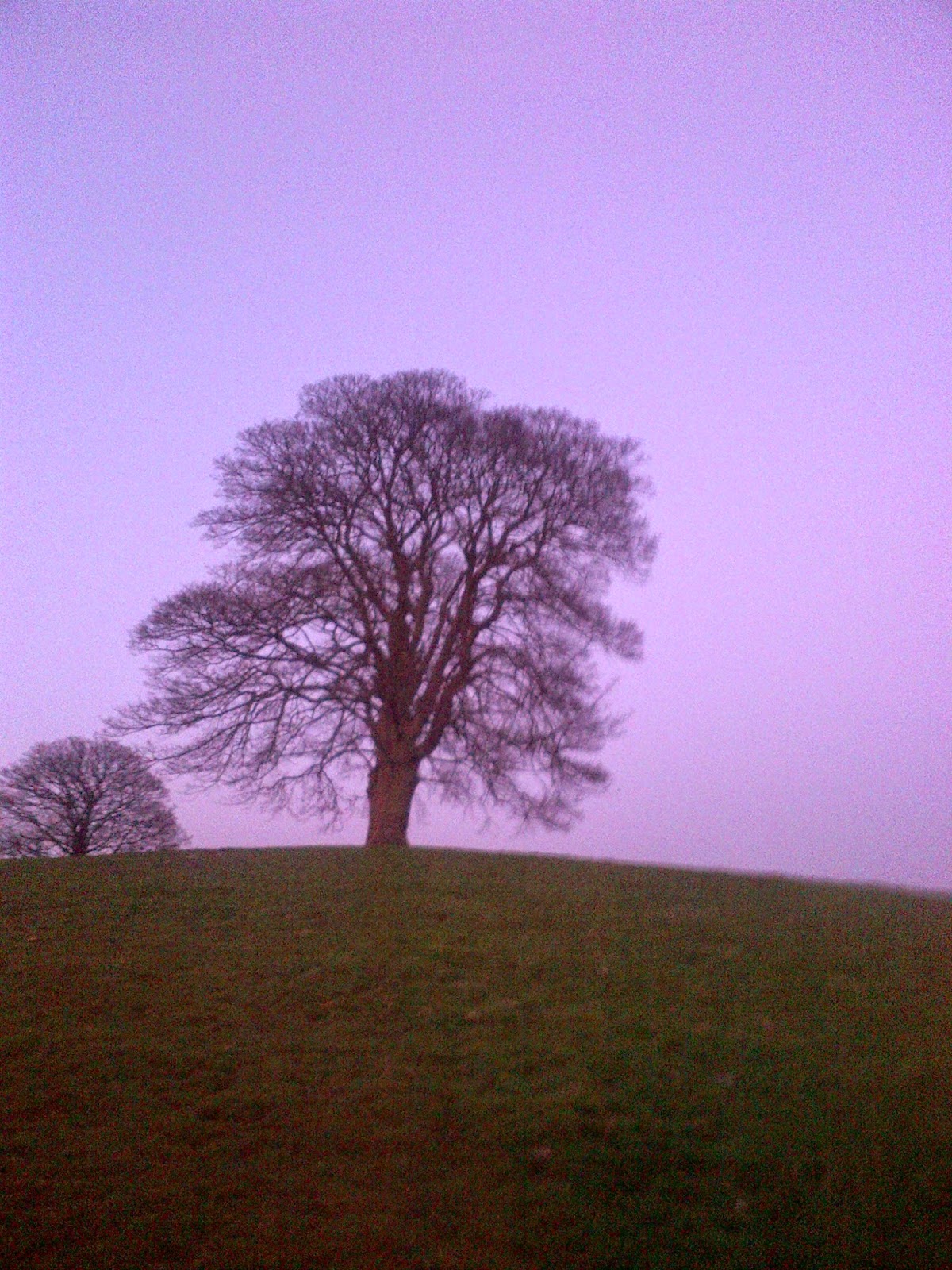 Tuesday 24th March 2015
Woke up mega early.  Got up at 5.20am.  Scrape car. Dog walked, papers fetched.  Bike ride.  Water plantation.  Ready for work and off turned back at Sturston Road due to accident somewhere between Ashbourne and Hulland Ward.  Into work before 8:30 though so pleased with that.  Busy day on the databases again!   Home for 6.30ish.  Tea. Dog walk.  Potted some seedlings as they were getting a bit big for the cell trays they were in so put em in some bigger ones.   The some accident turned out to be some poor 20 year old kid.  Don't know what happened but there'll be some sorrow in Ashbourne for a while I'm sure.

Put 1.5lbs on at group, bit miffed about that but will start sorting things this week.  Went to the Ostrich at Longlane for tea.  It was grand.   Bed earlyish.

Friday 27th March 2015
Up a bit later at 5.35.  Dog walked, papers fetched. Plantation watered. Into the office for just gone 8am.  Back home tea, dog walk, all good stuff.

Saturday 28th March 2015
Up early. Dog walked. Papers Fetched. Piccy B. Off to Belper to get the pooch groomed!!
We did a bit of shopping in Morrisions while pooch was bathed, dried, pulled and clipped and then picked her up an hour and a half later.  Great stuff.

Sunday 29th March 2015
Up early.  Dog walked.  Load of greenhouse stuff.  Made kids' breakfast as bosskat went leafleting with Mark next door - paid for that when she got back so I did.  More greenhouse stuff, more dog walking.  Damn tired.  Made a £1 clock for the greenhouse as lose all track of time in there.  The wee dog will now come into the greenhouse so am thinking of getting something comfy for her to sit on in there soon. Watched Paddington Bear later on and it was quite good. Even Phil laughed!

Tuesday 17th March 2015
Woke at 4am.  Up at 5:30am.  Dog walked, papers fetched.  Shave.   Planted some of the 2009 Eclipse Sunflowers and 3 of the 209 American giant sunflower seeds - it will be interesting to see if they germinate.   Up to golf club to clear my account and got a pro-quip waterproof - am umming and aahing about doing the Lifetsyle membership.   Will see.   Work for 8.45 and going the Derby way.  Funny day in the office.  Got home.  Tea. Dog walk. Telly - House of Fools - quite good. Dog Walk. Bed.

Thursday 19th March 2015
Woke at 4am.  Phil going to a New Holland open day thing so bosskat went and woke him only to find he's not going until 5am!  Got up proper at 5.55.  Dog walked, papers fetched, into the office a bit after 8.15  Am going on the bike tonight come what may.  Need to get in the habit again. Anyway, true to my word I didn't go on the bike until the following morning!!  Did some web stuff which was interesting (sort of)  all to do with making things mobile responsive.

Home for about 6.35.  Took a bit of time to get Now TV working so could watch Derby get beat by Wolves, gifting them goals with shoddy defence and then Lee Grant chucking the ball into the back of the net for them.  Marvellous start to the weekend.

Saturday 21st March 2015
This not having to play golf every week thing don't half make for a chilled weekend.  Too dog walk, got papers.  Pottered about in greenhouse.  Went and got breakfast from picnic basket. Went up to lotty to do a bit more digging.  Came home, took a metre square frame to to lotty on a bag truck - nice mile walk there.  Got home did a bit more in the greenhouse.  Tidied up me shed, found the gate spring so Phil can get that fitted and there'll be no more worrying about dog getting out (or at least less of it).  All good stuff.

Monday 9th March 2015
Up early - another rotten frost - thought it was supposed to be coming on milder.  Never mind, dog walked, papers fetched by 7.30. Into the office for 8am straight into it.  Loads to do.   Good day in the office, nipped to Aldi to get more fruit for the boss.  Back home for 6.30. Tea. dog walk.  Web work.  Bed 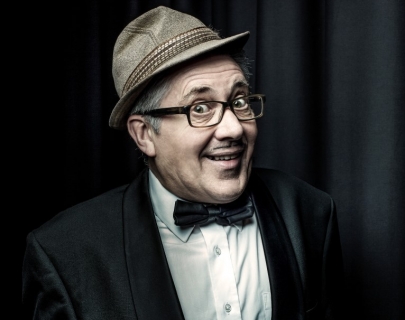 Friday 13th March 2015
Lie-in - didn't get up until 5.55am!  Absolutely hammering it down with rain.  Parked in leisure centre, dog in coat, brolly up, waterproof on and then found out I'd got a hole in my right foot trainer - marvellous.  Anyway into the office for a bit after 8am which was acceptable. Trip to Aldi to get fruit for the boss and booze for mesen!

Saturday 14th March 2015
Up early.  Dog walked, papers fetched.   7 mile bike ride - bit nippy so it was. Planting in me greenhouse.  Lettuces, minibell tomatos (9 seeds - tightwads at Wilcos), missus' hanging basket.   Did some shifting round in the heated propogator.  Fixed the little fence at side of lawn.  Everything going good - felt like should have been golfing but went to lotty instead and did some digging and some carting of stinky rotten weeds down to the recycling centre - took em all way in wheelbarrow rather than risk them making me car stink.  No big deal. 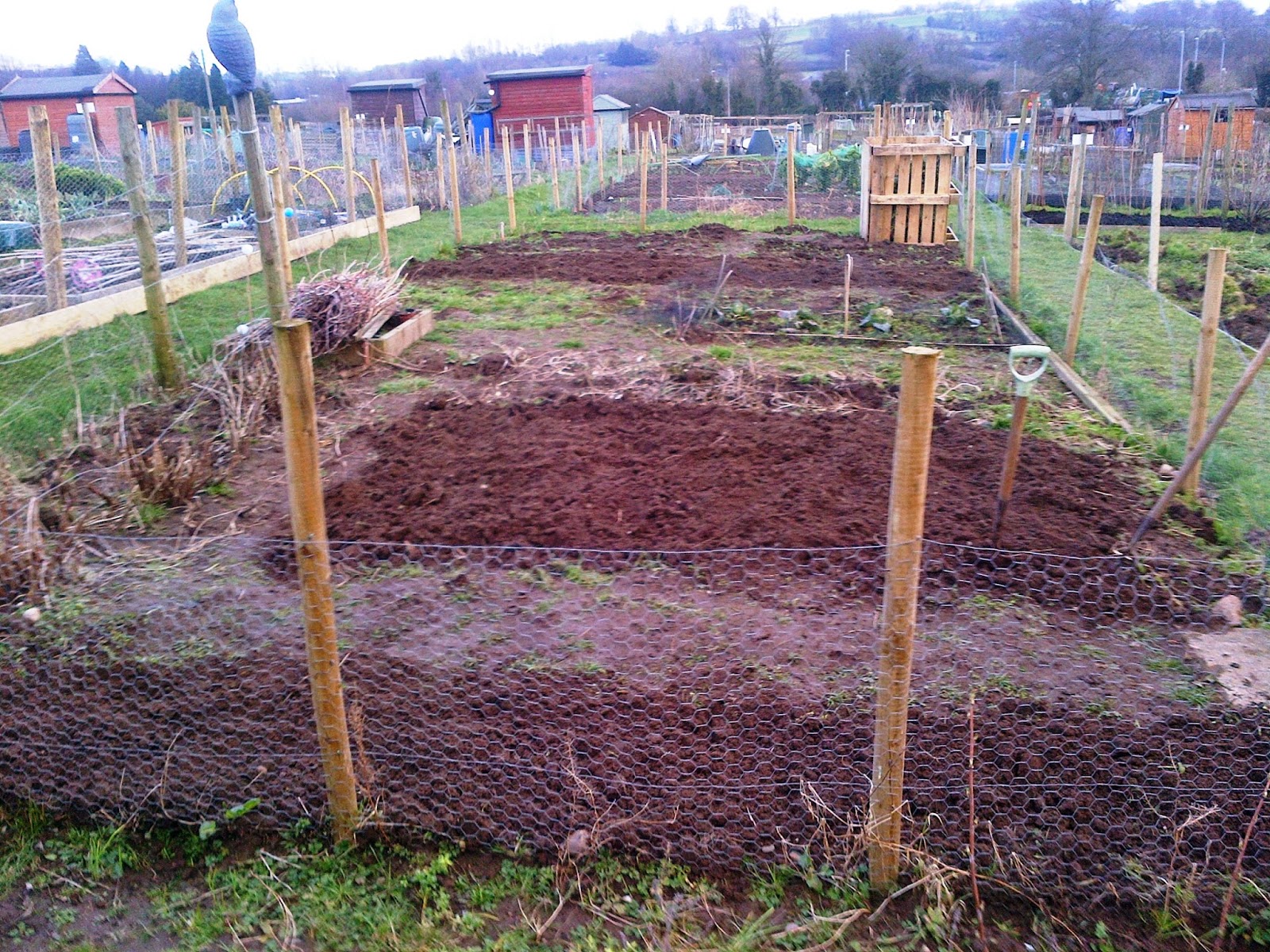 ngland vs Scotland on telly when got home so that was good.  Loads of dog walks.  All good stuff.

Sunday 15th March 2015
Up early. Dog walking.  Nippy again.  Did a bit in the greenhouse. Lunch with ma and pa at the Ketch  all good stuff.

Monday 2nd March 2015
Up early. Long Day. Aldi.  Got an email from Golf Club president to say if you know any members who are wavering!  Am gone, too late now!

Wednesday 4th March 2015
Found out I'd missed some Doctor's appointments like an idiot so re-arranged Diabetes clinic for today and left office shortly after lunch.  Blood pressure is a bit raised which is probably due to putting a stone on since stopping running.  Need to get my act together.  Got home from Doctors and did a couple of hours of work.  Planted some dwarf french runner beans (Ferrari) and some tomato seeds (plum rosa) I think in the heated incubator.   Dog walk.

Thursday 5th March 2015
Up early. Nothing to eat as got fasting blood test at 8.40am   Found out I could have had black coffee. Such is life.  Into the office for not long after 10am.  A lot to do today. Home for about 6.30.  Tea. Dog Walk.  Load of work done.  Love the ambiguity of this take on the weazel and woodpecker image. 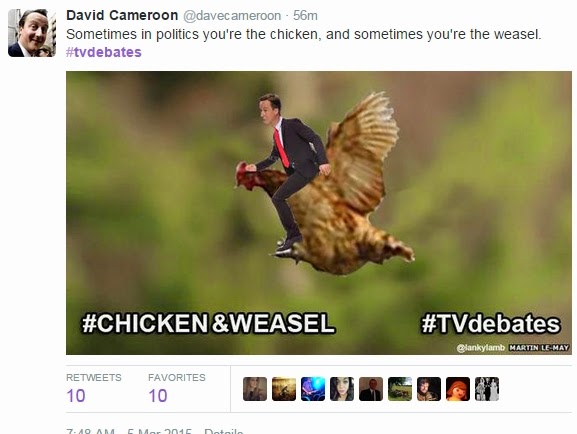 Saturday 7th March 2015
Up early, dog walked, papers fetched.  Piccy B brekko. Bit of gardening, another walk for pooch then off to the match.  Got on the Derby Swift bus at about 11.20 into Derby a bit after 12 and first pint in the Alexandria with Mr Fowkes at 12.15 all good stuff.  Had a few sherberts, a tasty burger and then watched Derby  give it away in injury time. 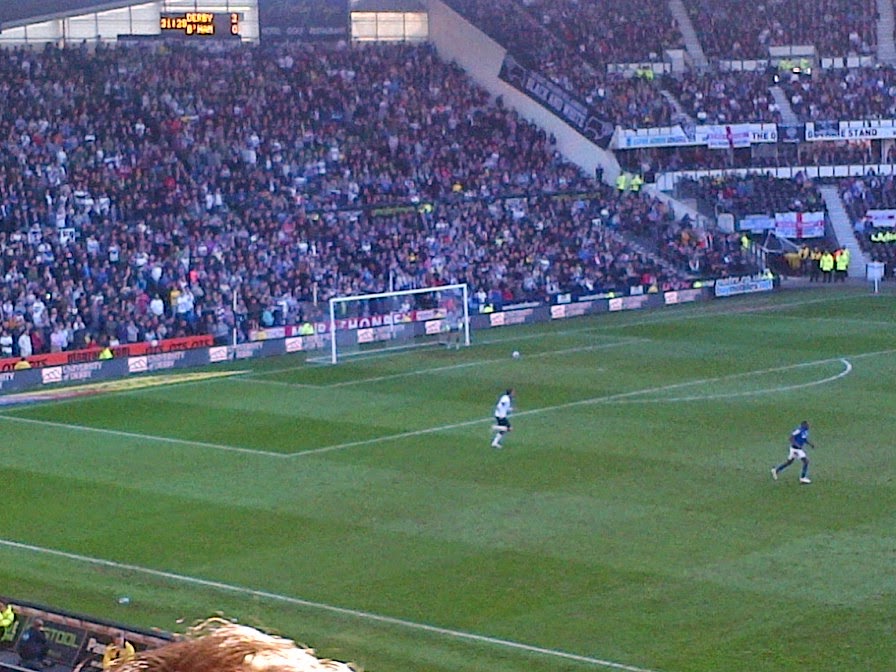 Sunday 8th March 2015
Up early.  Big dog walk through the meadow.  Did some web work.  Out in the garden.  More dog walks.  Doveleys garden centre in the afternoon - got 4 x 56litre garden compost for a tenner thought that wasn't too bad.   Watched an amazing program on Owls and bed early for 9pm!