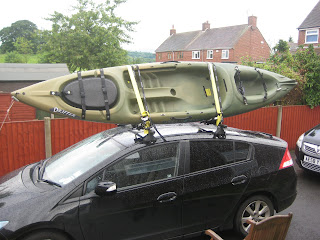 Have purchased a kayak -  wanted one, seen one, went and got one.  Now learning how to use one begins!!

Got a Kayak Taster Session booked up at Carsington this morning.  Will see how that goes and then might have a one day lesson to get the basics in.   Kayak taster session was an experience, the chap let me use a sit on top kayak like the one I bought but without the seat that mine's got so it was damned uncomfortable that said in an hour and a half I learnt the basic strokes.  I also found out that to launch from Carsington costs £5 for the whole day and that includes parking - think that's quite good!

We went over mum and dads after to pick up a cooker and by crikey it were an 'eavy one.  Any way job done, all good.  Next up was a 7 mile run which was very steady indeed as was starting to feel the residuals from kayaking in the morning particularly in the abs! http://connect.garmin.com/activity/192576169

Stayed up to watch the dire football - there's 2.5 hours I'll never get back!  What a shower

Monday 25th June 2012
Up early but mega knackered.  Did some tidying up and kayak sorting then a truncated 2.5 mile run as legs are knackered. http://connect.garmin.com/activity/192576173

Then me and Phil set about building a mini-frame for the kayak to be stored on. All done by 10:35!!

Tuesday 26th June 2012
After we'd done last night I read the Owner's manual for the kayak it said don't just wrap a tarpaulin around the kayak as it will turn into an oven and distort structure.  So got up at 5:30 and made a tent like structure to suspend the tarpaulin over it.  All good in the end but it meant no run this morning. In the office in good time though so everything else carrying on as normal.


Wednesday 27th June 2012
Up dead early to find an airbed as my mum coming over to baby sit for kids as we went to London.  Emptied everything out of the shed, looked everywhere, couldn't find it anywhere - turned out mum had got it!  Such is life.  Went to London on 11:15 train got there for 12:30,  lunch at Marco Pierre White (or whatever his name is)'s steak house in Bishopsgate, very nice indeed.  Then mooching about London, supper in the oldest pub in London apparently The White Hart which was nearby - bosskat liked it there too - very handy for Shaftesbury Theatre which is where we went after to see Rock of Ages.  Bosskat liked that even more so I'm the king of brownie points currently.  All good.  Apart from - last train out of London to Derby - set off at 11:15 good, got in at 02:51 so didn't get to bed til 3:45am !!  Cool but am in office as early as normal - all good. 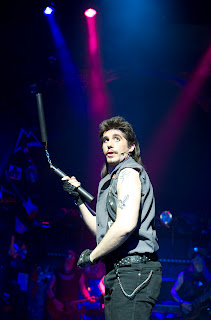 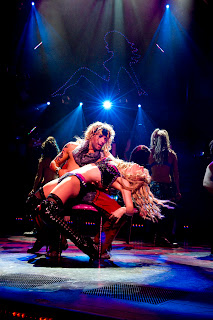 Hell's teeth - did I mention that according to the website the drummer in the band is none other than Chris Maitland the awesome original drummer of Porcupine Tree (replaced by the equally awesome Gavin Harrison of Rhythmic Illusions fame)!   How cool is that?  Rock of Ages was like non-stop 80s hair rock with a very thin plot - bosskat wants to go see the movie so it will be interesting to see what they've added to it to make a film out of it.


Thursday 28th June 2012
Woke up very tired at 6:50, Phil gone to work already, got everyone up, got the cover on my kayak that Phil had taken off for some reason.  Think I've got a crate for my rear tank well on the kayak I hope, and have got some 40mm pipe for rod holders - watch this space there's a work of cunning design being planned right now...  After work went to Badminton only 8 of us turned up - normally you're looking for a space.   Anyway, considering I'd only had 3.5 hours of sleep I was very pleased to be able to get through it.   At lunchtime I went to poundstretcher to look for a box I bought one that I thought would be way too big to go in the rear tank well on the kayak but ... I think it's bang on.  Am going to check it out at the weekend.


Friday 29th June 2012
Wedding anniversary 21 years today, where's my medal?   Anyway, got her a card after Badmo last night so all is well in that department.  Had decided I'd better get back into biking into work so got tyres pumped up proper and made good time, was in office for 8:30 so I reckon I've not lost much pace.  Need to get back into the habit really.   Have left the Garmin watch on charge at home so no tracking but the usual route - think wind was with me coming but not sure - probably going to be a bit of a grind going back!


Good day at work, lot of ground covered. Was introduced to  Glenys Wilmott MEP in the afternoon who is a lovely person I have to say, very interested in our Cycle2Work scheme.  All good.


Anyway, was hard work cycling back into the wind and when got to Ashbourne it took an age to get round due to Olympic Torch chaos.  Such is life, picked Phil up from work as his ped had given up on him.


Happy to get to bed at the end of it all!


Saturday 30th June 2012
Did some work on the Crate - this is how am going to hold fishing rods on it when paddling out to sea. 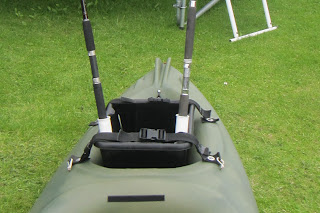 It's basically a storage box from Aldi that's been hack a bit to fit as it's a smidge too big. It'll sit in the rear tank well behind the seart. In each corner there's going to be a 11" section of 40mm pipe to hold the rod slighlty angled back to keep it out of my way.  All good fun.  Didn't do any golf - John at a party, Doug carrying a Euro 2012 related injury.  Had enough to do anyway.

Sunday 17th June 2012
Up early going for a run at 7:15 I've decided . Just got to get some h20 in me to counteract the lagers at Wing Wahs last night.  Hung about waiting for rain to end so didn't actually set off till gone 8 o'clock, less than a mile from home and sun comes out meanwhile I'm togged up for rain with a running jacket on so that was great.  Ruddy weather.   Anyway, did 7.5 miles this morning which is most for a while.
7.6 miles in fact: http://connect.garmin.com/activity/190217747

Went to Matlock Meadows farm, mum was doing Save the Children fund raiser so went along and supported, had a tasty boiger too. Nom nom.   Back home, bit of gardening, bit of watching footie.  Have fallen off the SW wagon a bit this weekend so some catching up to do I reckon.

Monday 18th June 2012
Up early'ish. Set off for run about 5:55am, got a hundred yards out and realised it was green bins day.  So looped back after a mile and put green bin out then carried on up town for papers.  Just shy of five miles so quite pleased.  http://connect.garmin.com/activity/190217751

Moved four more tomato plants out.  All good.   Moved some more flower things into pots in readiness.  Made a box for the callaways I'm selling to go out in.  Lots of good stuff.

Thursday 21st June 2012
Chucking it down with rain so decided NOT to go running!  Got into work early did some stuff.
Badminton at night anyway so not a complete loss!

Saturday 23rd June 2012
Still over a month til we go Anglesey again.  Am hoping to go collect a kayak this afternoon.  That's my next big thing!  Upper arm strength etc.etc.   Up at 4am sent Phil on his way, back to bed then lie-in til 8:30. Up and about resolving wind damage, got car sorted for kayak collection.  Golf was shortened to 13 holes so could go all way to Norfolk to pick kayak up.   Well worth it!


Did gardening when got back; planted some more lettuces, more red onions, potted some peppers (try saying that with a drink or two down you, weeded the front border thang, put canes and runners in for six tomato plants that have been toughened and put outside in growbags.  All good stuff.

Took mum and dad and family to Stepping Stones for lunch and very nice it was too.  Then did a load of Ebay parcelling up which had to be done.  Then had a bit of tea, then went up and did just under four miles of pretty decent golf if I do say so myself.

Took this picture of a mayfly on the roof of the car - spectacular creatures they are, shame they're so short-lived bless em. 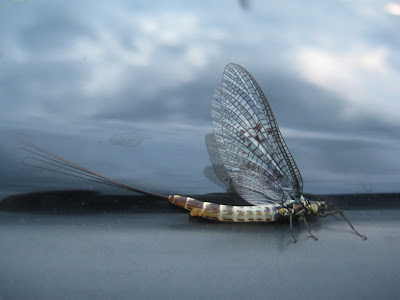 Monday 11th June 2012
Up a bit late.  3.5 average sort of miles. http://connect.garmin.com/activity/187976794
Went work, got back watched second half of England v France then watched bits and bobs of Sweden vs Ukraine.  Did nowt else really - very poor!

Wednesday 13th June 2012
Up early as usual, didn't get Phil up until got back from running as he wasn't on an early.   Did the now almost-usual 5 mile run but battery on watch ran out after 4.5 miles not bothered!!
http://connect.garmin.com/activity/188826265

Weighed in today - only put on 2lbs since last weighed before  holiday so that's more than acceptable after the beer and whisky drinks and other miscellaneous rubbish I'd expected half a stone to go on but am back in the groove and pleased with it all!

At 3:30 left office to go watch Halford Tour Series cycling event in Stoke-on-Trent.  Awesome stuff makes you want a road bike within five minutes of arrival.   Watched inidividual women's event won by  Helen Wyman from Kona Factory Racing who just led from the start and had made a 10 second or more gap within two laps and just held onto it for 40 minutes or whatever it was.  The blokes was similiar an Austrian rider called Bernard Sulzberger won it.


My boss John, who I went with presented one of the trophies at the end which was quite amusing - don't think he was expecting that earlier in the day!! 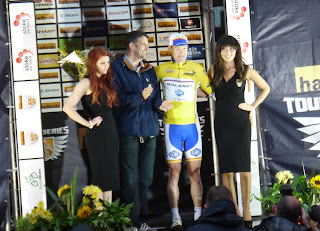 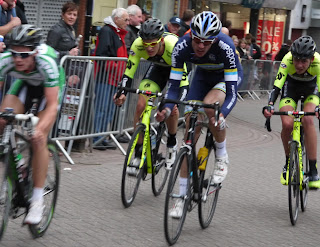 An action shot from off John's camera.

Where we were stood in Yodel's hospitality areas (is the start of the link below!).
http://connect.garmin.com/activity/189105126


Friday 15th June 2012
Woke up mega early by Lucy as there was a fly in her room bugging her! Awesome, then got up again to get Phil up at 5:10am.  Stayed up but knackered so only did a bit over 3 miles this morning.

Forgot to reset my watch last night so the start point of the attached is the position we were standing for the Halfords Tour Event in Stoke,  if you zoom in on the Ashbourne bit you can see 3.2 miles of running up Ashbourne and back.
http://connect.garmin.com/activity/189105126


Saturday 16th June 2012
Steady sort of a day.  Up at 4am got Phil up for work, back to bed.  Lie in. Got stuff ready for recycling. Did a bit of minor gardening.  Made brekky for Lucy.  Fetched piccy b brekky for me and Phil, nom nom nom.
Went golfing.  Very frustrating stuff - waterproof on, waterproof off.  Played some good shots but putted like an ejit.  Such is life.

Went to Wing Wahs for Allysa's 21st.  It was very good indeed.  Impressed. 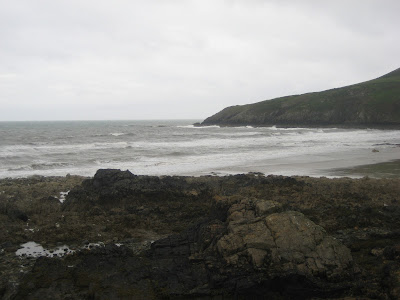 Not much to say!
Wet, Windy, Wales
a Week.

Alcatraz
Apparently the water never gets to the top of this rock so you can get an extra 70 yards out to sea before you even start - handy for fishing.   This was the walk to get there:
http://connect.garmin.com/activity/187976763 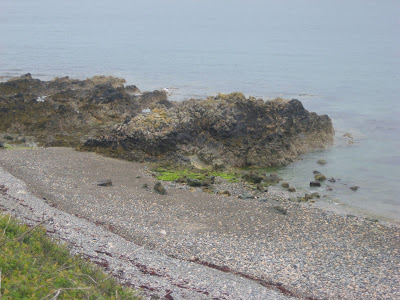 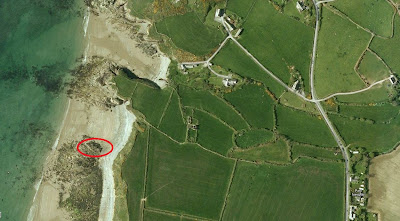