Friday 30th July 2010
Another three miles, like yesterday I was up at 4:10 to take Phil to work then back to bed til 5:50, then on road, knackered so pleased with run in a way. Details

Wednesday 28th July 2010
Got up early. Garmin battery was flat so just been a walk/run up to golf club then into to Town to pick up papers.

Tuesday 27th July 2010
A really slow 5 miles this morning - will have a look at the stats when I get a min but think it was something like 10:40/miles. Had PJ caddy for me up the golf course after work. Made the total mileage for the day something like 7 miles. Birdied first hole, parred second and third, double bogey'd fourth, bogied fifth, parred eighth, bogied ninth - okay stuff really just showing Phil the lay of the land for when he gets permission letter to go shooting there.

Sunday 25th July 2o10
Did nine holes of golf and that was it! Bit of gardening but that don't count.
Posted by Paul at 07:25 No comments:

Saturday 24th July 2010
Up town and back in the morning. Golf lunch time - not a million miles off okay - 47 from front nine with a lost ball, 47 on back nine which wasn't going too bad until finished last hole with a nine - after being in greenside bunker for 2 - six putts I think although I may have given the wrong score if I think about it. Doesn't matter had blown the round by then.

Thursday 22nd July 2010
Woke up late, really tired so just did 2.5 miles up town and back. The 405cx was absolutely flat this morning so no record but it wasn't particularly quick. Last badminton til September tonight which is a shame.

Wednesday 21st July 2010
Me dad's internet stopped working so said I'd pop over to Darley Dale and ay a look before went to work. So everything in overdrive this morning. Same old five miles - left timer on while I went into paper shop so the average willl be up but it was okay. Five a day is getting to be habit - can't let it drop. Went over to me dads and the problem had fixed itself - which was nice. In office on time. At lunchtime walked up to post office and back from work - 1.78 miles, in evening walked up golf course, did a bit of practice, 2.5 miles.

Monday 19th July 2010
Up nice and early out on road for a slow five miles. Details here.
Quick walk at lunchtime to post office and back at work - 2 miles almost. Details

Sunday 18th July 2010
Not done a great deal - same as yesterday got up at 4:15am (!!) to take Phil to work, came home, went to bed, got up at 9am'ish for the second time. Washed both cars, sorted out the recycling, sorted out a second set of golf clubs for the trip to Anglesey in a few weeks, put some junk on Ebay to sell. Sorted out a cymbal stand and the chimes for Lucy to use in the end of term concert. Fetched Phil from work. Found a bag that had a load of fishing tackle in it. Wrapped up Phil's birthday presents. Watched another rubbish major on TV - why can't brit players putt? What's up wiv em?

Went out golfin with the holiday set -Taylormade R360 driver, Yonex 3 wood, Adams 5 wood, Taylor Made LCG irons and Cleveland wedges and an old Never Compromise putter. It was average sort of stuff really. Details here
Posted by Paul at 17:13 No comments:

Friday 16th July
Pleased with myself this morning was knackered after badminton last night, shattered so to get another five miler done this morning was really good. Have put on 3lbs in 2 weeks since last went to group so need to get myself going in that regard. Mentioned earlier this week that had set goal of covering 35 miles on foot this week - this was done this morning so might have a bit of a rest tomorrow and then start again on Sunday.

Thursday 15th July
Went for a bit of a walk last night up the golf course (!) for 2.5 miles and did another five mile run this morning. Had no go at all so was not displeased at averaging 9:50 miles. Details here

Wednesday 14th July
Nice to have a bit of rain but glad it was gone for this morning. Another five miles at a pace of 9:21 was okay. Details here

Tuesday 13th July 2010
Me and Phil been busy setting up a trampoline for Lucy's birthday. Went v. well after two hours we had the thing finished. This morning struggled to get out of bed then struggled round five miles - further exacerbated by not switching the darned watch on after had got the papers so only have 3.5 miles recorded towards the goal. Truncated details here. Anyway 17 odd miles of the 35 target are recorded with 1.5 miles off the radar. Got a new phone yesterday called a HTC HD2, have the HD mini last week and didn't like at all - couldn't text as the keys asre too small.

Monday 12th July 2010
Have set a goal up in Garm in Connect to cover 35 miles every week -did another 6 this morning and thus far have got 14 of those miles ticked off the list. 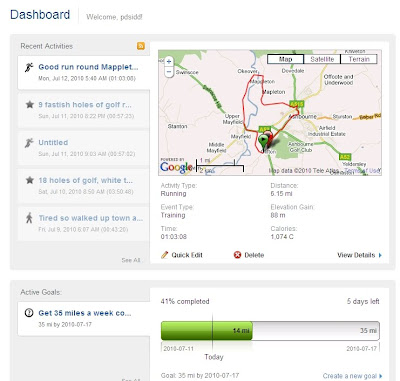 Sunday 11th July 2010
Starting training again. Set myself a goal of covering 35 miles a week. Have ticked 6 of them off this morning avg 9:42 which is not too bad when you consider I'd got some pain in me quads to start off with. Will post up details later. Bit of Golf at night 9 holes in under an hour - only four shots over par as well.
Posted by Paul at 09:51 No comments:

Saturday 20th July
Dead tired and ankles still hurting walked a bit and got papers. Did 18 holes off white tees and scored miserably. 95 which would mean I'd played to 24 handicap not the 17.1 I'm supposed to but I did last four holes in nine over so it looks worse than it was really.

Friday 9th July
Knew I'd be knackered today so walked up town and back for papers. Watered everything as usual, work again. Did a bit of crappy golf practice again.

Tuesday 6th July
Bit tired but got into office for just gone 7am, not done any running as have to leave office at 12:30 to go do Wizard of Oz again.

Monday 5th July
Had a bad night with all sorts of sickness, stomach cramps and stuff. Hey Ho. Walked up town and back as didn't fancy running. Didn't go in to work as didn't feel good enough and had half a day booked off anyway. Sorted out kit for the big gig this week - Wizard of Oz with Clifton Primary School, piano and drums in acompaniment - it went great and the kids were just marvellous. Really inspiring.

Then went and did nine holes which was good fun - hit my biggest drive ever up the fourth (255yds) and thought it must be wind assisted, then hit a beaut down the fifth (240yds) as well so it might be something as simple as lightening grip and aiming out to right a bit - have been drawing the ball a bit of late which is most unusual for me. Scoring wasn't brilliant but was messing with swing so that's what you'd expect, really. Hit almost 250 on the first but seeing as how it pull-hooked onto the 15th fairway it's probably nothing to write home about in some ways - that said if you go that way on a medal and hit it 250 down the fifteenth it leaves you with a wedge to the first green - which is nice!

Sunday 4th July
Didn't do much at all after a v strenuous Saturday! Got Phil to work before 5am again. Did a few jobs, went to a family do. Not much else!
Posted by Paul at 21:56 No comments: