Monday 26th June 2017
Back to reality.  In the office early doors after the usual dog walk, papers and watering the lotty.  Busy day in the office then back home a bit after 5pm

Tuesday 27th June 2017
The usual - watered lotty, fetched papers with the dawg, into office early doors.  Over to Darley Dale to do a bit of watering.  Picked Lucy up from school on way home.  Tea then got lawns mowed as the weather is on the turn!

Wednesday 28th June 2017
Up early doors,   no need to water as it's been chucking it down in the night.  Dog walked papers fetched into office back home for 6.15 after getting the good lady some flower on way home.

Thursday 29th June 2017
Hell's teeth been married 26 years, 26 years.   Up early dog walked, papers fetched, cleaned up dog sick on carpet, writ on the card, got ready and into work for 7.40 - the internal alarm clock failed a bit as didn't arise until 5.40am!   Went to the Cross for tea - all good stuff.

Friday 30th June 2017
Just the usual I think.  Did a couple of hours of work on Churchbaycottages.com

Saturday 1st July 2017
Crikey half of the year gone already!  Blimey O'Reilly.  Took dog out fetched papers then over to Belper for dog grooming and brekkie.  Then lots of little drum related jobs made an 18" o-ring out of an old bass drum head, learnt the art of removing the snares on a Premier 2000 snare drum then putting a new snare head on - not as easy as it ought to be!!    Found that snare drum is only 41 years old 5th April 1976 is printed inside it. 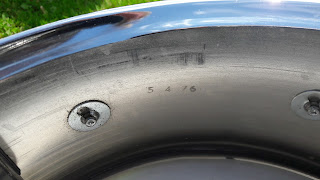 Set up the Coleman Instant Dome 5 that we are going to use next weekend up as well.  I didn't like that it's two skins an inner and an outer but it didn't take more than 5 minutes to set up and I can use it for wales and get a bed in it properly which will be a big improvement on the Instant Dome 3 which I ought to sell thinking about it. 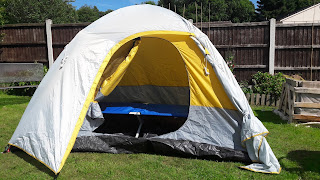 Sunday 2nd July 2017
Took pooch out.  Did three hours at lotty.  Cross for Dinner, load of slabs down in the evening.  All good stuff.

Monday 19th June 2017
Up before 5am, Down to Lotty  to water - wasn't first person there so a bit disappointed then got papers and then into office for 7.30.  Got to see if I can get an emergency dental appointment.  Got an emergency, problem with a tooth at the back - needs root treatment apparently so two 45 minutes sessions to look forward and a course of antibiotics in the meantime.  Oh Joy.   Did some work at home.   Went down to lotty about 9pm thinking I'd have a clear run at watering but there were loads of people there so used water out of the IBC in the main.  Did a bit of tidying up on number 7 as well. 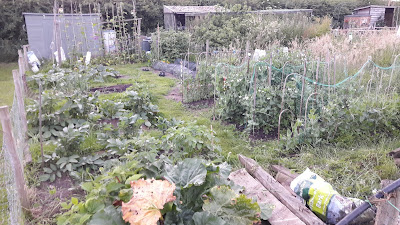 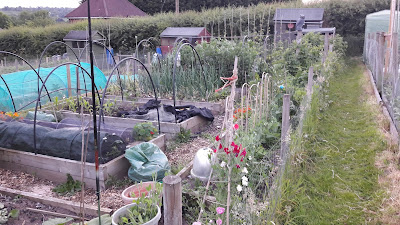 Wednesday 21st June 2017
Longest day - it's all downhill from here into darkness!  Got up at 5am took pooch to lotty and we got everything watered so I don't have to go tonight.  Got a small tub of strawberries while I was there but forgot to bring back a couple of courgettes that I did spy on me rounds.   Never mind. 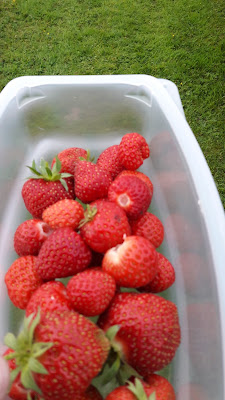 Got papers and got into work for just after 7.30.   All good stuff.  Over to me mum and dad's after work to do a load of watering.  Dropped some strawberries off for Uncle Micheal on way home - everything tickety boo,

Thursday 22nd June 2017
Nights closing in again.  Up early, dog walked, papers fetched.  Hectic day in the office.  Got done for about 4.30 then back home to find stuff for camping with.  Put roof bars on for kayak transportation.

Friday 23rd June 2017
Up early.  Dog walkeds, lotty watered.  Everything watered.  Car loaded up and off to that Wales on me tod.    All set up by mid afternoon bit cloudy, a bit cool but that's typical of my luck, Our Andrew arrived about 3:30/4:00pm so went to get some bait from Telboys and then BBQ, then gettting ready and off to Lligwy for a spot of fishing - four bass and a dogfish between us in a session spoilt by the rain. All fish returned,

Saturday 24th June 2017
Up early and off golfing with Paul.   Tee off about 6.25 played okay 33points same as Paul so honours equal. 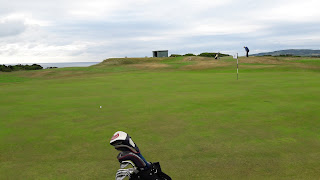 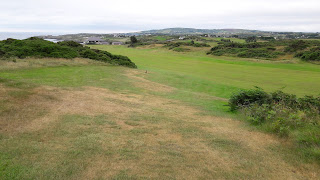 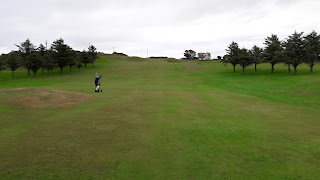 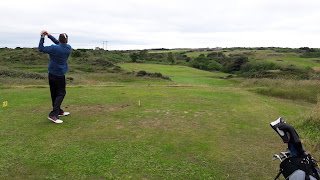 Then back to the site by 11am.  Went into Holyhead did a bit of shopping and then back to site to sit in the sun for most of the afternoon. Loaded kayaks up for transportation back home, then went and dug some bait for the evening session.  Vic and myself fished the cafe beach but nowt doing there so went to bottom of the ramp and fished off there - both of us getting a small bass which were both returned

Sunday 25th June 2017
Up early, went and recovered a rig that was lost on the cafe beach then finished packing up.  On the road for 8.45 taking it steady with a yak on the roof.  Back home for 12.30 with a few stops to check yak safe and pick up coffee to keep me keen.   All good stuff.  Unloaded, dried the tent out as it was raining intermittently in sunny Wales.  Then did little apart from dog walks and bed early at 9.22!! 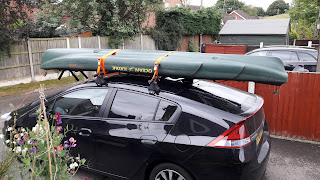 
Friday 16th June 2017
Up early, watered lotty.  Got papers.  Couldn't get an appointment at Dentists got to ring back on Monday at 8.45am  Took Lucy to see Sarah Calman at Buxton Pavillion Gardens which is sort of the Opera House - was good fun and Lucy enjoyed it.  Then went to Phil's mate Lewis' 18th Birthday at Wyaston Village Hall - bit of a blast from the past as we used to rehearse there 25 years plus ago.

Saturday 17th June 2017
Up early.  Watered at the lotty.  Fetched papers.  Did a few jobs then took me mum and dad to Hull to get on a cruise ship.  Then back home and loaded up for a gig at the Gate Inn, Branston which was good fun if a little low in attendance due to the fact it was red hot.


Sunday 18th June 2017
Father's Day - got to bed about 3am after gig.  Dog woke me up at 5am (asleep on sofa see - I was jiggered).   Took pooch out then had another kip!   Went and watered down at the lotty.
Then pottered about went on a mini shopping trip with the missus got some bedding plants had a look round etc.   Barbecue Tea.  Got some more lettuces on the go and some purple broccoli for next spring. 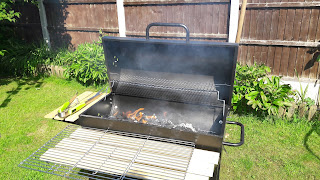 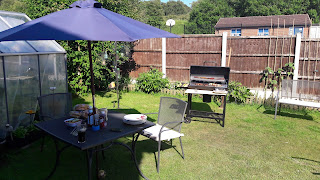 Not sure what else happened this week!!

Thursday 8th June 2017
Drove down to London to see Phil Collins at the Royal Albert Hall.  He had a trip Wednesday night so gig was cancelled - all that ruddy way!  Never mind made most of it had a good walk round Leicester Square and Covent Garden - missus got a Micheal Kors purse and we saw School of Rock which was very good in all fairness. 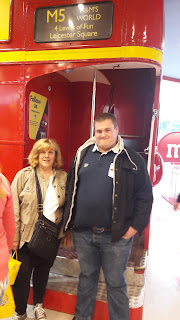 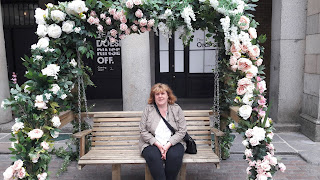 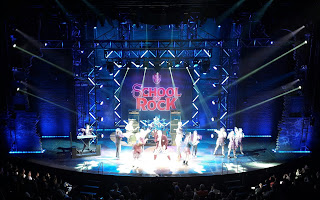 Friday 9th June 2017
Up early.   Breakfast at 7.30 in t' Travellodge, Then a mini-shopping trip then the long drive home.  All good stuff.  Good to take the wee dog a walk when got back. 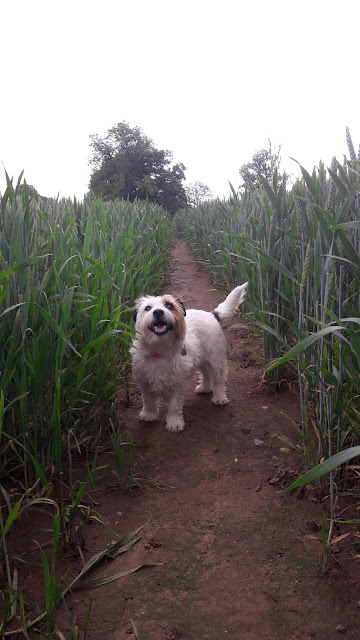 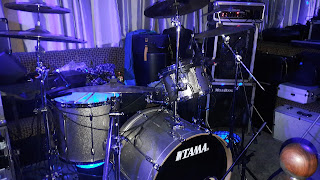 Missus went to Football presentations at the Golf Club had a smashing meal and both bosskat and Lucy received awards so they were both well-pleased. 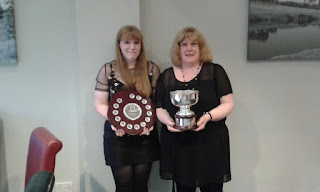 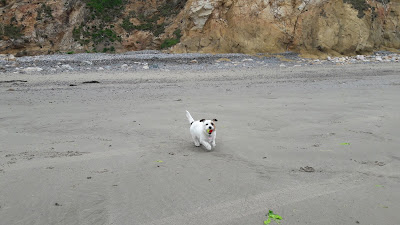 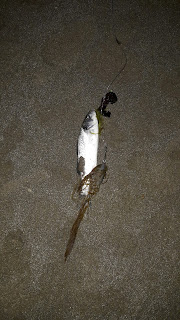 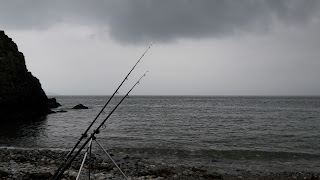 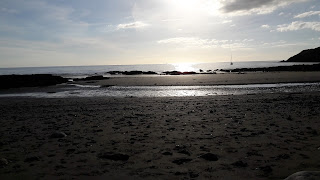 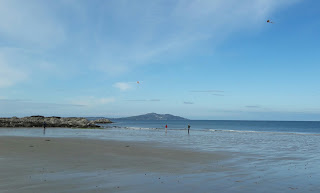 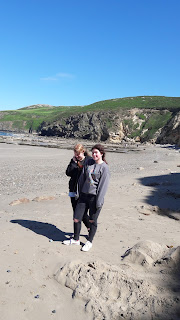 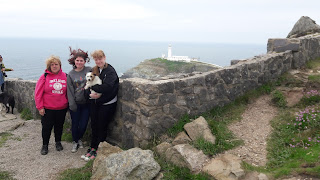 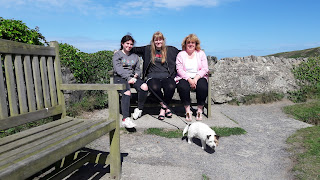 Did the usual sorts of things yakking, fishing, shopping, chilling etc.etc.  and why not.  Back on Saturday 3rd June with a bang.   On way back A55 shut due to someone jumping off a bridge or threatening to so that added a fair bit of time to proceedings - such is life.