Wednesday 25th May 2011
missus wanted some bread making for a friend so I couldn't do the bike into work. So ran up town and back - steady 9m 12s miles was okay. Details. Got two multiplier reels off ebay came yesterday. Am going to overhaul them both later but they generally speaking work okay. Had a bit of a thrash on the playing field with the Okuma Magnetix MG20cs. Set it up on a telescopic 12 ft rod with a 4oz lead and was lobbing it out about 70 yards or something - the rod's not ideal so might take out my first Daiwa which is a bit more solid tomorrow night after badmo.

Tuesday 24th May 2011
Up in good time - didn't seem as windy as forecast so made decision I'd bike into work from Belper. Bit more windy than I'd thought. Am hoping wind will be with me on the way back but I bet it isn't! Details. Was really late from work, forgot to pick me coat up from gym changing room - set off and realised this about a mile out so didn't want to turn back. Weather looked a bit iffy so rode harder than normal - hence 15.7mph average. Am going to stick with this biking mullarkey - it'd be cool to see if I could get to a 16mph average over 10 miles. Well cool. Details

Monday 23rd May 2011
Up earlyish considering was watching Tin Cup til nearly midnight . Quick run up town and back. Details. Had a thrash with the sand wedge in the field. Sweet. Goes a good 70 yards when struck well. Went to do a mini-update for the Mona Villas Website last night www.mona-villas.fsnet.co.uk I'm no longer able to upload web changes for the original websites I did as I've not got an orange / wanadoo / freeserve account and made a bigger mistake when I found out I'd changed John's account to BT last year!!! So we had to set up a dial-up account for John just for the purpose of uploading the changes which only added up to about 30K in any case! Anyway it got done and it's off my list now.

Sunday 22nd May 2011
Not much to report. Went to Donington Markat early doors for some bits and bobs for hols. Got missus the new Whitesnake album in a special presentation pack for the princely sum of £3!!! Awesome. Also got latest Total Sea Fishing magazine for £1.50 and some others to keep me busy should it rain!

Bought a Taylormade LCG sand wedge clubhead from Ebay for about a fiver and fitted that to a shaft I had that was on a duff five iron so now have a full set of LCGs going from 2iron through to sand wedge. Excellent. Might give it a go in a day or two.


Went to Stone Cottage to upload their website changes later on. One of the first websites I ever did and it shows a bit. Never mind. www.stone-cottage.fsnet.co.uk Mini bike ride there and back.
Posted by Paul at 07:45 No comments:

Saturday 21st May 2011
Got up at 8am! That's not happened in a while. Cleaned cars inside and out. Hoovered up. Wheel is now falling off the Dyson which is a worry. Played not bad golf - 87 for a nett 69. Should have been much better but screwed up three holes with poor drives, all three ended up with triple bogies unfortunately. Lot of pars though - five on front nine and four in a row on the back nine just not quite consistant enough yet. Details
Friday 20th May 2011
Tired like nowt on earth this morning so nowt to report. Will have to do something this evening though.

Thursday 19th May 2011
Ride into work again - steady - got stuck in traffic a couple of times which took some of the fun away but am finding am arriving at work nicely refreshed because of the experience. Details

Rode back, steady 15mph average all the way - definitely seem a bit easier going to Belper. Then Badminton with Lucy in the evening. Knackered at the end of it all. Details

Wednesday 18th May 2011
Good stuff, up early. Got stuff ready, spuds watered, papers fetched, bike in a state of readiness on car roof. All good. Then drove to Belper, parked up, rode into work. Averaged 13.6mph with stops at traffic lights etc. Went through Swanwick which seems to be a bit easier from the route I did last time. There's one bit of steepness (excluding the hill up to Pentrich, which I push for a short distance) then the rest is a steady incline which works nicely for me. Details Didn't get out the office until 6pm but rode back to Belper nice and steady until got over took by some whipper snapper on a Cannondale so upped my pace a bit to try and stay with him - which will be around the 7/8 mile mark I think. Details

Tuesday 17th May 2011
Quick run up town and back. Steady if not spectacular as legs were aching bad. Details Then went to see about a website update for Stone Cottage. So went on bike for a mini-spin. Then at 8:30pm no less went to do a bit of golf almost in the dark! Which was okay - am getting to grips with irons again although the driver's gone south for thwe summer it seems.

Monday 16th May 2011
Steady start to the working week - four mile run, sub 10 minute miles. Details. Amber Valley have got back in touch. A three month car parking permit is £78 which means I'd need to use it three times a week to get my money back. Am thinking that I could do this and park close when I need to be home early, further away when I want to be getting in shape! It would certainly be an incentive so I think I'm going to give it a go. Did a bit of golf in the evening about 10 holes - 4 pars and the rest bogies was steady enough for me.

Sunday 15th May 2011
Not a bad start. Did a 20 mile tribute to the party in the park rides of recent weeks. Went up over Kniveton turning left at Knockerdown and across to Bradbourne, then down to Fenny Bentley, right at top of Ashbourne and over to Mappleton before coming back through Okeover Park and back to sunny Cliftonia. 20 miles in an hour and a half or so. Steady if not spectacular 12.5mph average. Baked a cake to take over me mum. Assisted the horror in getting the front lawn done. Yay. All good so far and it's only just lunchtime! Details of ride


Set up a website for Ashbourne Fly Fishing Club which has been interesting so far: http://www.ashbourneflyfishingclub.co.uk/index2.html
Posted by Paul at 11:46 No comments:

Friday 13th May 2011
Perhaps a daft day to do it but thought I'd get some cycling in. Parked at Belper then cycled 10 miles into Work and back. Okay apart from getting drenched on way back.
Thursday 12th May 2011
Quiet - dead tired - got up late - no run - badminton at night
Wednesday 11th May 2011
Same run up town again with a little bit added. Around 9:55 pace I think, not had time to upload as am going London Town to an InternetWorld exhibition thang. Details.

Tuesday 10th May 2011
Another run up town and back. Steady enough and a bit quicker than yesterday. Details Me any Lucy went out for a walk early evening before nipping over to the Park for a short time.

Monday 9th May 2011
Was happy overall with yesterday, absolutely shattered when got back home last night but got back into the running again with a likkle 2.5 miler up town and back. Sub 10 min miles which is good enough for me. Details

Sunday 8th May 2011
Woke up at 4am to the sound of pouring rain which was a bit of a bugger as I'd wanted to re-ride the route to check it was all okay. Didn't get that chance so the ride started at 12 noon. Only 4 riders on the 25K one, rode round with Claire Brackenbury (Margaret Miles-Bramwell, founder of SW's daughter) few problems with hills, punctures, head-winds and what have you but we got it done just took a bit longer. Details

Three hour drive home and then it were all done!
Posted by Paul at 07:52 No comments:

Saturday 7th May 2011
Sunderland 25K testing the route out went okay. Got lost on a regular basis so will need to sort out the courses thing on the FCR1 (maybe reading the manual might help!). There's a bit of the trip to the hotel bolted onto the end of this link but essentially that's what I done today.

Up at 4am to take Phil to work. Nice morning and when we set off at 4:30am it's already becoming light. Got back and thought I'd have a crack at programming the route for the http://www.bensmiles.com/ Sunderland Party in the Park 25K route which I've done using http://www.bikeroutetoaster.com/ then outputing the course to a TCX file which has then gone into the Garmin 405cx watch. Am hoping it'll give me directions along the way but will be taking a map in the rucksack just in case. Did a quick spin on the FCR1 this morning just to check the chain is alright and apart from a bit of noise in second it'll be fine. It should be for £35!!! So will be dropping Lucy off at me mums in a couplde of hours and then all being well setting sail for Herrington Country Park to test the route out ahead of tomorrow! 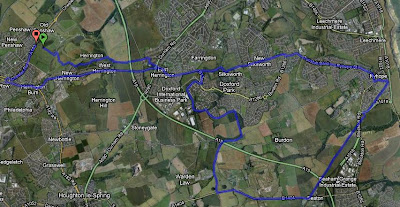 Thursday 5th May 2011
Well set off with good intentions - rode most of the way ... to Hulland Ward before chain snapped. Great. Within minutes though a chap called Graham Soult stopped and asked if he could help - I was going to walk back home which would have been six miles but with a fair bit of downhill. Anyway, he said he was going to Kirby in Ashfield and could drop me off on the way. What a star. Offered him something for his trouble but he was having none of it - will find some way of repaying the favour I'm sure. He's a director of a company called SteveSoult.com who make coffins of distinction, no less and a top man in my view.

Wednesday 4th May 2011
Solid run up town and back. Sub 9 min miles. Details. Rode back home on the FCR1 - Details.

Tuesday 3rd May 2011
Up early, watered everything. Ran up town and back 2.5 miles in sub-9 min miles which was nice. Details


Monday 2nd May 2011
Big ride today (Well should have been!). Tweaked my brakes first thing so went on a spin up town to test them and found I'd got a very loose chain link. So off to Halfords and they put a new link in and it now feels good as new again. Went and did the 25K ride which went okay as the route was changed from Friday's!!! Problems with a puncture meant it wasn't the fastest of rides but it was for a good cause so not to worry! Details Check out the progress Ben Miles is making at his website http://www.bensmiles.com/


Sunday 1st May 2011
Not much to report. Went to Donnington Market first - got Phil some bits for his compressor got some sea angling magazines for diddly squat.
Posted by Paul at 04:54 No comments: