Monday 18th May 2015
Up early.  Dog walk truncated due to rain. Back home, shaved and what have you.  Papers fetched. 6.15 second dog walk.  Into office for 7.55 Back home, tea. big dog walk. Put a load of dwarf french beans on a mini-wigwam in a tub.  Took the missing dwarf french bean (let's call him Dozy) down to the lotty to finish the mini-wigwam down there off.  Covered it up with a bit of fleece.  Got some more mole-hill soil for me soil store.  Earthed up the emerging potatoes a wee bit.  Back home, bed by 10pm

Tuesday 19th May 2015
Didn't get up until 6.10!!  Have had a bad back for a couple of days so I neurofenned up before bedtime last night and paid the consequences this morning.  Dog walked papers fetched, greenhouse done, no trip to lotty needed so was in office for 8.10am which wasn't bad, all things considered.  Home for 6.15,  Tea, dog walk.  Pottered about.  Sorted out water butt inside greenhouse - plants like warmer water you know.   Found roof bars - think I may need to replace them this year - will ring Halfords tomorrow.. Got Phil to go down lotty and finish off the IBC wooden encasing that was never finished!

Wednesday 20th May 2015
Got up at 5am - back to normal.  Back is still hurting a bit but nothing like on Sunday so that's good. Dog walk, brekko, bit of watering and stuff in greenhouse.  Into work for 8am.  Troublesome day then went to group after, lost an unlikely half pound which I'm pleased with as it was unearned. Didn't do a great deal in the evening but got the roof bars sorted for the car with some brute force adjustments and  cunning guile. So that's a big worry off my mind and the buggers are fitted better than previous years for sure!  Watched an episode of elementary that was really good as always.  Bed about 11pm after watching some Phil tat called Great Big Swords (really).

Thursday 21st May 2015
Up at 5.20m, bit late.   Dog walked, papers fetched.  Opened up greenhouse (only watering at night now as my book advises! Into office for 7.55.  All good stuff. Got home. Tea. Dog Walk. Roof box on. Sorting stuff out to go on hols. Tinkering in greenhouse working out what else can come out so the lad don't need to water it.  Going to be busy tomorrow and first thing Saturday and that's for sure!

Friday 22nd May 2015
Up at 5.10, dog walked slowly, back home for 6.15am. Brekko then off to the lotty to have a look at plot number 7 which is three up from my current plot.  It don't look too bad so have made enquiries about what rent might be for it as we're a bit late for getting most things going.  As it's got no fence I'm thinking I can bang loads of spuds in and put in a fence come Autumn or put in a mini fence with the chicken wire I've still got left to protect some stuff perhaps. We'll see.  Into the office for 8.15am 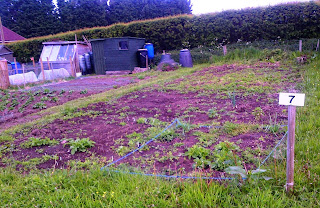 Monday 11th May 2015
Up at 5:15  Dog walked, papers fetched. Potted 2 butternut squash and on pumpkin as I noticed they were very dry at the bottom when I planted some at the lotty yesterday.  Nipped to lotty to take covers off dwarf french beans. 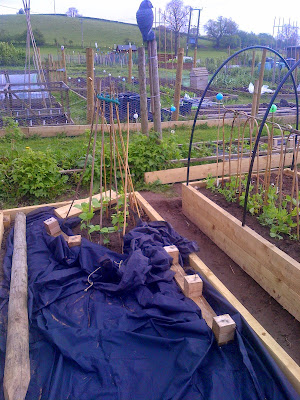 Lorry broke down on A38 so not into office until 8.15.   Hectic day, most of stuff got done.  Back home for 6.15.  Tea, big dog walk.  Took missus up town to get some money.  Got Phil to drop me off at Halfords.  Picked up bike, fixed me back brake and fitted me new grips for £12!!  Can't argue with that can you?  Rode bike down to lotty.  Got some molehill soil.  Did an outer wigwam for the french beans. 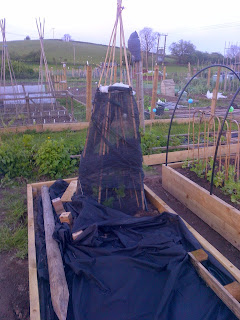 Tuesday 12th May 2015
Up early - 5:20.  Dog walked, papers fetched.  Polished shoes a day late.  Opened up Greenhouse, brekkie and ready for work.  Popped up lotty on way to work, put a few more broad bean seeds(?) in as this is the last month you can apparently.  Have a bit of a dilemma at home as don't seem to have any runner beans according to plant labels just loads and loads of dwarf french beans - will have to see if I've got that right. Into office for 8.10am after a bit of a queue on A38

Got a load of canes from Wilko at lunchtime for diddly squat compared to the garden centre purchase last year.  £2.50 for 10 8' canes.  Marvellous.

After work it was a case of driving over to mum and dad's and sorting out the old PC.  Bizarrely the machine would play sound from media player but not from Internet Explorer and not from Google Chrome.  After much scratching of head it turned out the solution was to go: Control Panel, Internet Options, Advance, Multimedia option, Play Sound in Web Pages, switch off, switch on again.   Obvious when you think about it.   Anyway, got home for about 7:30.  Tea then down to the lotty to cover everything up because the Oracle says there's going to be a frost (even though the forecast was 7 degrees). 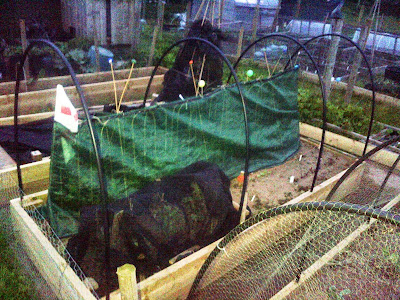 Wednesday 13th May 2015
Woke up at 4am.  Thought shall I get up and see how frosty it is, then thought no, I'll get up at 5:15am, the proper time.  No frost, quelle surprise.  Took dog a walk, fetched papers, uncovered everything, got stuff out of greenhouse that I'd put away.  Uncovered stuff in the greenhouse against the terrible frost that never bloomin happened!  Got home after visiting group maintained that'll have to do!  Home, tea, dog walk.  Mowed lawns; front, back and lane. Cycled to lotty, covered stuff up as both Phil and Bosskat predicted frosts.  Some chance but if I don't after being given fair warning and there is a frost I'll never hear the end of it.  Did a bit of weeding while I was down there all good stuff.  Fixed washing machine when got back.  Happy days, bed by 11, read book a bit too.

Thursday 14th May 2015
Up at 5:15, walking dog, fetching papers, watering everything.  Planted some Scarlet Emporer Runner Beans. Down Lotty to uncover, work for 8.20.  All good stuff.  Got Phil's phone back from Tango Communications on Normanton Road in Derby - cost a bomb but he's happy and he's paid for it.  Good.  Got back from work about 6.30, tea, dog walk. Greenhouse, covering up of plants for last time I think then down lotty.  Covering up a bit and a bit of tidying with the boss. Dug late pit for runner beans and got some newspaper down in the bottom to hold water a bit.  Plenty of muck down there so not worried on that front! Did a bit of work on ChurchBayCottages.com

Saturday 16th May 2015
Up early. Dog walk, paper, piccy B.  Loads of work in the greenhouse re-arranging to make it tidy and easier.  Have put a water butt inside to make watering easier.  Allotment. Golf. Allotment.

Monday 4th May 2015
Up early.  Dog walked, paper fetched. Loads of potting up in the greenhouse, got some plants outside too - lettuces and some cornflowers and stuff. Then down lotty, more digging and a raised bed with about 24 cabbages of three different sorts in it.  Got a big net over it too, so getting there slowly.  More dog walking, bed for 9.45

Tuesday 5th May 2015
The usual start to the day, dog, papers, greenhouse, work.  Took an hour and a quarter to actually get to work though which wasn't fun.  Back home for 6.30.  After big tea I walked to the lotty and did a couple of hours and then walked back.  All good stuff.

Wednesday 6th May 2015
Up at the crack.  Nice and dry day.  The usual morning routine. Into work for 8.15 after getting a refund on an aldi helmet that wasn't right (XXL my a*se).  Stressful day, home for 6.30.  Didn't go lotty but did a bit in the greenhouse.

Thursday 7th May 2015
Lie in - got up at 6.15, slow walk with the pooch but back before 7am.  Potted a load of sweet peas before me and Phil laid a load of slabs for next door.   Golf at 2pm with Dad and Uncle Michael at Ashbourne -  good fun for all.   Tea at Stepping Stones - very nice.  Nipped to lotty to check all was well.  Bed 10.15

Saturday 9th May 2015
Up early - the usual.  Fetched Piccy B.  Took Phil's phone to Derby to get it fixed.  Got to wait until next week and it's going to cost a fortune.   Golf at 12.45.  31 points, just scraped a win to take the money.  Took load of rubble and stuff to the recycling center.   Update the net sort of.  Still not ideal but will do I think.

Sunday 10th May 2015
Up early, dog walked.  Load of work at the lotty in the morning.  Took missus for lunch.  Neatly got wiped out on the way.  Back to lotty in the afternoon and got a load more done.