Monday 24th April 2017
The usual - dog walk, papers, work, home about 5:30.  Did a bit of potting and what have you.  Got everything into greenhouse ahead of the big freeze.  Got little paraffin heater going for first time this winter,

Tuesday 25th April 2017
Up early.  Dog walked etc.  Into office for 7:30.  Missus got tickets for Ed Sheeran so got home about 5pm so she could have car and go to Sunny Nottingham - did a bit of tuning on new bass drum tuneds batter head for 60hz and Resonant head to 65hz - still not sure I'm happy with it though.  Also fitted Evans damping pad thing.  All good stuff - bed about 10:30 missus got in at silly o'clock,

Wednesday 26th April 2017
Up early.  Dog walked, papers fetched into the office for 7.30am again.

Thursday 27th April 2017
The usual I would imagine!

Friday 28th April 2017
More of the same.   Started sorting greenhouse to get tomaor

Saturday 29th April 2017
Up early, dog walked.  Did a bit down the lotty.  Got all the weeds out of the bean row on number 7 and put slabs down behind it.   Golf in the afternoon finished well after a shaky start was 1 over for the last four holes which was steady stuff on the 17th and 18th in regulation. 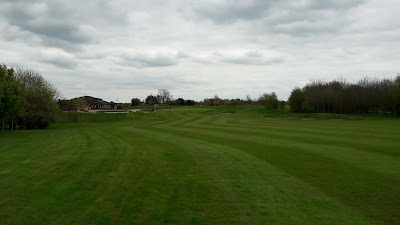 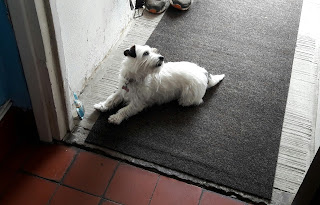 Monday 17th April 2017
Up early, dog walked, papers fetched - Easter Monday - no work today thank you very much.  Went to Homebase to have a look at patio paving - crap.

Tuesday 18th April 2017
Still off work.  Ace.   The usual sort of stuff.  Went to Hangar 4 to have a look at patio paving - much better   Having some of that.   Just need to work out how much sand etc. we need.  did a bit down lotty too - missus turned up unannounced bless her.

Wednesday 19th April 2017
It couldn't last! back to work.  Never mind.  Funny day in the office.   Did a bit down the lotty - got a couple of clocks up on the sheds and weeded another bed.

Friday 21st April 2017
Rigmarole getting home with a car overturned on A38.   Dog walking and stuff

Saturday 22nd April 2017
Started on the great Patio project.  Went up to Hangar 4 paid for patio paving and  cement and sleepers and stuff.  Measured out and started removing turf. Took some turf to the lotty to make a path on number 7 that I can just mow rather than have to weed.  Am going to use slabs for other side of bean row and perhaps down the bottom somewhere. 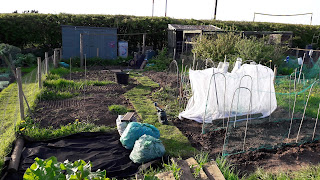 Set off for Gig at The Navigation on Horninglow Road in Burton. 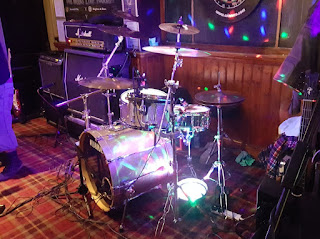 Funny gig it was,  Burton Albion got points to avoid relegation so lot of their fans in but worse for wear.  Never mind took the big-little EFX kit out again.   Quite like the compactness of it.

Sunday 23rd April 2017
Up early.  Proper knackered.  Took two more loads of turf down to lotty and path for number 7 is complete.   Did a load more digging and a load of discussing with young Phil.  Need four more sleepers for a start.   Never mind, over to me mum and dad's for tea and put new roof felt on his shed while we were there - after doing that I reckon I can probably do mine with a bit of help from missus.  We'll see.  Got home, took dog with to lotty to water then put stuff away and off to bed.

The usual plus did some pottering in the greenhouse also daisy chained some of me drum lights so I know how to slave them together so they all do the same thing - need to modify the casing for them and we're away!

Tuesday 11th April 2017
The usual - up early dog walk etc.etc. At 10:24 I won a three piece Tama Superstar Shell Pack for a really low price so really pleased about that.  Had to fetch it from Sheffield which was a bit of a bind.  Dropped in on me mum and dad on way back so that was good.  Back home about 7.10pm and straight into the doghouse. 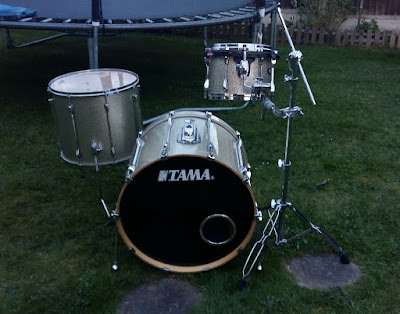 Wednesday 12th April 2017
Overlaid - got up at 5:55 and playing catchup right from the off.  Such is life.  Still got to work before 8am but would have preferred to have been earlier.  Left work early for dentist.  All went well got to do more work on me teeth meself - interdental brushing apparently, Still survived it.   Did some drum tuning and then did a bit in greenhouse.  Took pooch the long walk through the meadow - all good stuff.

Thursday 13th April 2017
Up at 5:15!  Back to normal, into the office before 7:30.  Reet busy day, left about 4.15 as missed the bus again!!  Never mind.  Got home, Tea then took pooch the long walk through the meadow - it's summer again!   Went down lotty, strimmed and mowed and then come home and watched Broadchurch and then Billions.  Both grand telly.

Friday 14th April 2017
Up at 5.15.  Dog walked.  Papers fetched, into office nice and early. An amazing amount of phone calls all things considered.  Never mind.   Busy Day back home for 6pm.  Did a bit down the lotty.  Modified me plant pot lighting system so I can DMX the two lights together so they are proper syncronised.  Good stuff.

Saturday 15th April 2017
Up early, papers fetched.  Did a bit in the greenhouse.  golf at midday'ish.   Played okay got par on the last with a 20 footer, John three putted and it was all square so no shiny pound exchanging hands! Good good.   First gig with the small-big kit went pretty good all things considered. 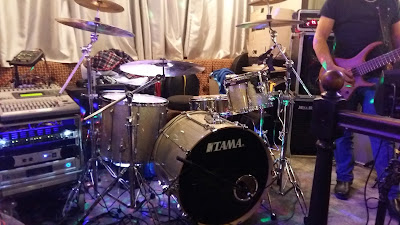 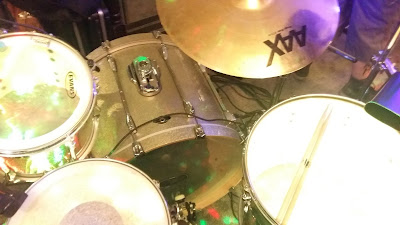 Sunday 16th April 2017
Up early.  High stress day.  Mum and dad coming for lunch as well as Janette's brother Paddy so it will be high stress.  For Sure.  Did a bit in green house too so all good stuff.   Had a drink or three two and am still off work until Wednesday. Whoop.


Tuesday 4th April 2017
Up early.  Dog walk. Work then on bus to Derby at 5:15'ish from Nestles (as was), over to Derby Bus Station then Costco, yukkety pizza then Derby County F.C. for a reet good game with 6 goals in it and Derby coming out on top.  Fulham are a really good side though - Derby couldn't get the ball for much of the first half!

Wednesday 5th April 2017
Up late - woke at 4am, went back to sleep got up in a mad rush at 6:30am Disaster.  Got to work for 8.15 which I suppose ain't bad all things considered but have left me phone at home which isn't ideal!  Anyway, finished about 4:45 back home for 5:30, tea then did a bit in the greenhouse, potting stuff up.  Have put the propagator away as didn't seem to do any better than some of the stuff in the greenhouse - in fact courgettes set off in the greenhouse but not in the propagator.  Have got just about the right number of tomatoes going I think - also got a few sweet peppers and a few cucumbers going as well.  Went to the allotment to get some purple broccoli for the missus.  Watched Broadchurch which was excellent but unfathomable as usual.   Bed a bit after 10pm.

Thursday 6th April 2017
Up late but not as late as yesterday, into the office more or less on time.

Friday 7th April 2017.
The usual then a gig at Peakdale.  Very tired - back at 1:30, watched highlights of the Masters Golf, bed at silly o'clock

Saturday 8th April 2017
Over to Darley Dale for me mums birthday then back to Ashbourne to get a load of lotty stuff done.   got runner beans and early onwards peas in and covered up.

Fell asleep while supposed to be watching Masters - such is life!

Sunday 9th April 2017
Up early as usual.  Dog walked. Shoes polished.  Loo rolls replenished etc.etc.  All the little jobs.  Did an hour down the lotty - weeded the onions and got half rows of beetroot and radishes in.    Got back and did a load of potting.  Lucy football at half one - superb weather - little dog loves it.

Wanted to watch Masters but two tired so went bed at 9:15
Posted by Paul at 07:48 No comments: