Sunday 29th December 2013
Not much to report.  Up early.  Dog walked.  Went to lotty - took all rubbish to tip. Put the last panel on the IBC cover.  Fixed the missus' throne.  Took greenhouse down (shutting stable door after horse has bolted a bit).   Dug the other half at the bottom.  Still plenty to do. 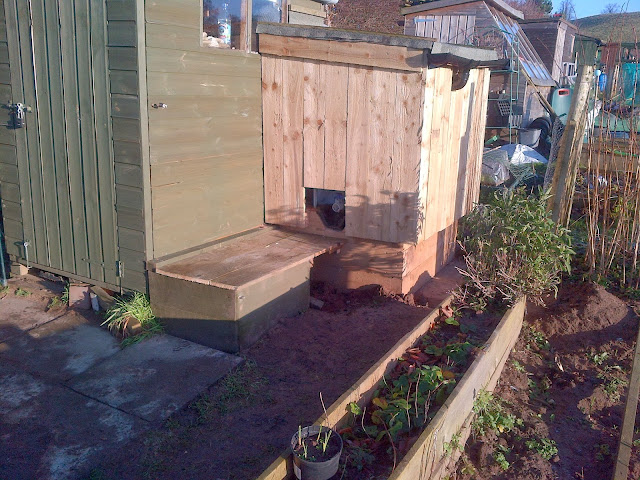 Wednesday 1st January 2014
Up at the crack of dawn (went to bed at 9.30! Party pooper).  Dog walked. Hacking it down with rain all day.  Took Lily on a 1.5 mile walk in afternoon before over to me mums for new years day tea which was very nice.  Bit of a hoo-har at it that will take a lot of getting over.  Such is life.  Went to bed early again - woke up to watch Sherlock at 9pm but too tired so back to bed!

Thursday 2nd Janaury 2014
Up early.  Dog walked. Over to Darley Dale to pick phone up that I'd forgotten (halfwit).   Into office for 8.30 though all good stuff.  Went to group after work rather than Friday morning - managed to scrape a maintain which will have to do for now!  Xmas drinking will be coming to an end real soon!

Friday 3rd January 2014
Got up at the crack of dawn.  Got Phil up.  Went back to bed, got up at 5.45, let the pooch out then off up town to fetch papers and give the Lil dog a mile or so of early morning walking.  Weather much better than forecast so that's good.   Food optimising breakfast of weetabix, banana and yogurt then off to work.  All good - back in control perhaps.  100 days to London Marathon - think I need to start making every one of them count!  Porridge for lunch - 3 apples, 2 bananas during the day.  Zero alcohol.

Saturday 4th January 2013
Up early.  Didn't walk far first thing as was so wet the dog turned back.  Can't fault her.  99 days to London Marathon.  Found out early that golf was cancelled so that was marvellous.  Took Dog lots of walks.  Went and did a little tiny bit down at the allotment.  Went to Hangar 4 and got an 8 x 2 loft flooring board to see if we could get it up into the attic.  The good news is that yes, we got it in the attic.  So now going to get the attic semi-floored before the solar guys come.  Zero alcohol.

Sunday 22nd December 2013
Damn tired so I am.  Up at 4am to make sure Phil got up.  Up at 5am when panicked that Phil hadn't gone to work but it turned out to be Lucy in the loo.   Finally up proper at 6.40 and took the pooch out.  Tired though.  Did a slow slow run (full of cold and out of shape) round Mappleton and back.  Just under 6 miles in about two weeks I think.  Popped over to have a look at the lotty in the afternoon.  IBC filling up nicely. 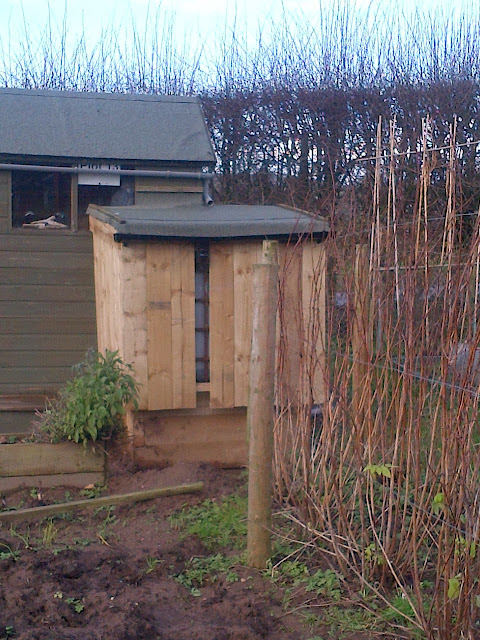 Over to me mum and dad's for tea.  Very nice.  Bit tiddly when all done but such is life and it is Christmas after all.  "Get dressed ye merry gentlemen" as they'd say on Cabin Pressure.   Took dog a walk while over in Darley as well.  All good stuff.

Monday 23rd December 2013
Up at 5:30, dog walked nice and early.  Into the office for 8am for a early reheasal but nothing achieved until 9am as bass player was late. AAAgggh.  Never mind. Last day madness at work.  Soon be all done and dusted.  Set list was Disco 2000 (Pulp), Under Pressure (Queen) going into Ice Ice Baby (Vanilla Ice) with a slight tempo slowdown, Acoustic version of Somewhere only we know (Keane) then Merry Christmas Everyone (Shakin Stevens) before finishing off with Merry Christmas Everybody (Slade). We had to do the last two a second time as we'd only got what we'd got.

Wednesday 25th December 2013
It's Christmas..... Up early doors as usual to take dog out.  Kids up eventually.  Pressies opened.  Got a wonderful hat and lots of other cracking good stuff.  Little dog got a jumper:


Thursday 26th December 2013
Didn't do much.  Got up dead early, took pooch a walk.  Fetched papers.   Did very little for rest of day. Took Lily on her longest walk yet for got to take phone so mapped it on MapMyRun as being 1.93 miles. 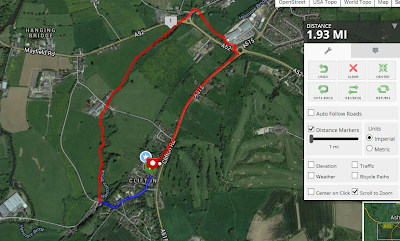 Friday 28th December 2013
Pleased with myself for going and facing the music.  5lbs on at group.  Has to be done.  Did a top day's work then took the family to Stepping Stones - had a top tea.  All good stuff.  Took Dog walks but nothing good to report other than that.

Saturday 29th December 2013
Up early.  Dog walked.  Jobs done.  Made brekko for Lucy.  Went to do golf.   Played rubbish again and got beat.  Got back with an hour of light and a nice day so went to allotment to do some measuring.

Sunday 15th December 2013
Woke up full of cold.  Great.  Took dog walk.  Down the Lotty with Phil getting IBC finished off, dug a load of the plot as well. 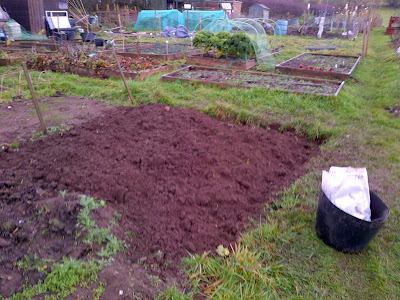 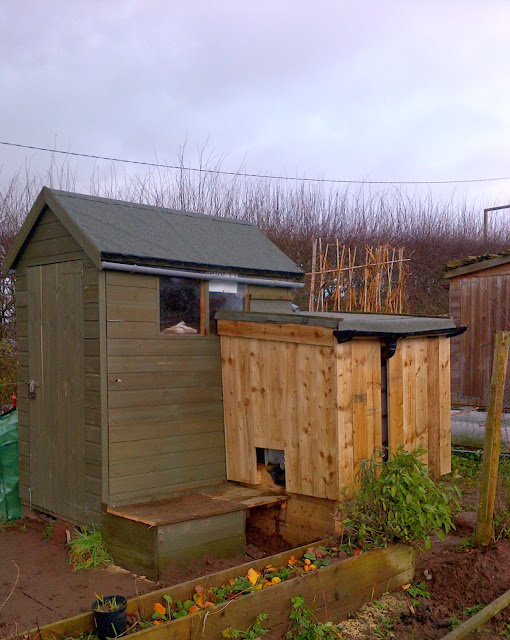 Monday 16th December 2013
Up at 4am to make sure Phil got off to work.  Still not feeling good at all but have rehearsal at work so got to go in.  Went in and found out rehearsal cancelled due to someone not being well.  Great.  Such is life.  Dog walked when got home.

Tuesday 17th December 2013
Up at 4am again. All good stuff.  Still feeling rough. Dog walked. Into the office for 8.15 so not bad. Lot to do and dentist appointment later.  When got there the Dentist was bare - sorry, closed due to a power cut. Marvellous, couldn't even get me hair cut as the barbers is on the same side of the street and all that side was out. 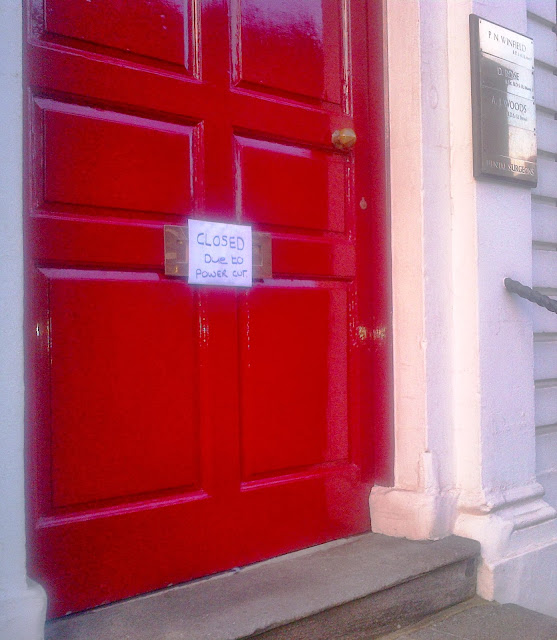 Wednesday 18th December 2013
Up at the crack of dawn.  Dog walked. Into the office before 8.30.  Still full of cold. Such is life.  Rehearsal after work for the works do.   All done and dusted now - it will be okay, confidence is high.

Thursday 19th December 2013
Up early, dog walked, into the office early.  Skipped the XW meeting as didn't want to infect anyone and had some words to sort out for a press release on a project I'm involved with.   All good stuff.  Diabetes clinic after work.  Everything fine - cholesterol good, blood pressure good 134/70, blood sugar good 5.8 (I think - probably remembered that wrong).  Anyway if the doctor's happy I'm happy.    Me and Phil put a new blind up when got home - that was a lot of fun with supervision from she who must be obeyed.

Friday 20th December 2013
The usual in the morning.  Up early door, dog walked.  Wrote some more Xmas cards.  Went to Hollie's group in Belper.   A pound on this week which considering I've not been running due to cold but have been whisky tasting on an industrial scale due to cold  - I am more than happy with.   Into office for 9:30, final rehearsal tonight.  All good stuff.

Sunday 8th December 2013
Up early as always Phil gone to work bless him. Back to bed.  Dog walking at 6:30 all good stuff.

Did a 3 mile run in 35 minutes out of shape and protecting right knee a bit never mind.

Cut up wood for IBC we're one piece short but getting there.  Bit of work on the lotty getting there gradually.  We've got a roof over it.  Wind has moved shed a fraction so the door's a bugger to open now. 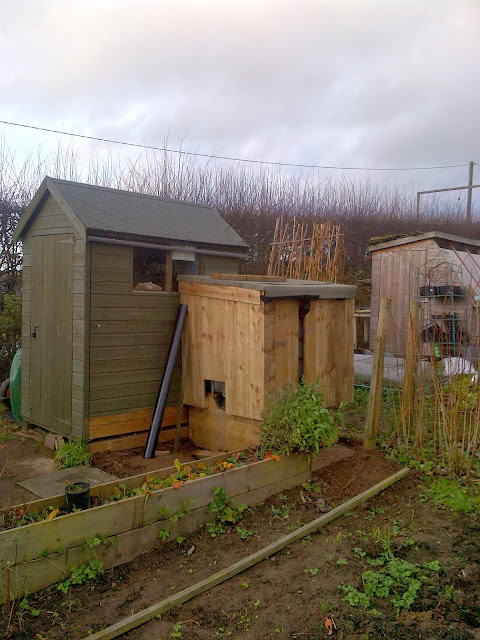 Thursday 12th December 2013
Up at 5.40 (deffo habit).  Dog walked. Run two miles (22:27 getting fractionally quicker each day!).  In Alfreton for 8.30 before shop even opened - got missus an Xmas present nice and early.  All ticking over nicely.   In office for 8.45, bit later than usual but you can't be everywhere all the time can you!  Saw an old work colleague, Alan,  after work which was nice.  Must make more of an effort to keep in touch. Trouble with life is there's so little time.  Back home for 9.30, fasting for blood test in the morning.

Friday 13th December 2013
Got up at guess what time.  Yes, it's habit.  Took lil dog for nearly mile and a half, bless her.  Back home in time to get Phil up. Blood test at 8.40 so did another 2miler in 22m 17s - see getting quicker all the time.  Doctors and bloods took then off to work.  Things to fix again.

This is entered a week late.  Did a bit of work on the lotty.  Found out we had to move the IBC which didn't go down well with Phil.  Still we get on with it.
Went to mum and dads' for tea.  Lots of dog walks the usual stuff.

Friday 6th December 2013
Back to group for first time in four weeks.  Not surprised to have put 5lbs on.  In the time the brother-in-law went in to hospital (five weeks) have put on half a stone.  Got to change - got to get ready for London Marathon in April.  So stopped the booze.

Saturday 7th December 2013
Up early.  Got Phil up (but he was already up). Dog walked.   Had another solar quote - much better and happier with supplier - very thorough and much more cost-effective.  Golf at lunch time - slow and did 14 holes before we called it a day.  Nice coffee in the clubhouse then back home.