Monday 27th March 2017
First day back at work in British Summer Time - don't like it.  Was up mega early though and took dog out, fetched papers, saw a headgehog!  Into office a little bit late can't be helped.  Busy day,  Back home for a bit after 5pm.  Took pooch along the line - saw a small not-green woodpecker - will have to see what kind it is but it definitely looked woodpeckerish.  Did a bit in the drum attic.  Our Andrew has lent me his double pedal but I reckon it needs a fair bit of adjustment. 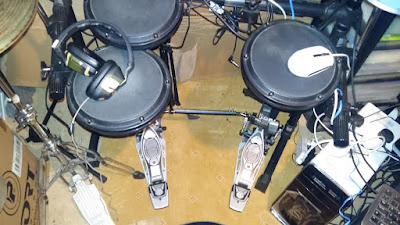 Did a bit in Greenhouse sowed some bits and bobs used one of the large pots the missus got for some sweetpeas for the lotty.   Did a bit of web work, watched a bit of telly.  Off to bed 10.30


Tuesday 28th March 2017
Up early.  Dog walked, papers fetched into office for 7.40.  Going lotty later without fail.  Home for about 5pm, dog walked, loaded car up and took a load of stuff down the lotty - big tub, sharp sand, carrot seeds, seed potatoes etc.etc.   Must remember still owe Bernie £2.  Anyway, got stuff in position, got a wheel barrow of top soil in the tub, got drenched when heavens opened.   Went home soggy.   Watched Broadchurch and a classic albums program on the The Big Pink by the Band - very good.


Wednesday 29th March 2017
Up at 5:10.  Dog walked, forgot paper money so had to make two trips up town.  Into office just after 7:30.  Ho hum.  Back home for about 5pm - it's good this starting early mullarky.  Dog walk, telly and did a whole lot of potting after my lovely missus cleared the bedroom window so I could put a load of propagator pots we have from Wilko in it.  Got lots of tomatos, cucumbers etc going.  All good stuff.   Did a bit of practicing to a click as well which was nice.

Thursday 30th March 2017
Up at 5.15.  Not raining bonus.  Took pooch a walk, got papers etc. even remembered to take paper money with me this morning.  Into office for 7.30am

Saturday 1st April 2017
Up earlyish considering, dog walked, papers fetched etc.   Golf cancelled due to weather forecast rather than actual weather. Did a load in greenhouse and what have you.   Gig at The Olde Royal Oak in Burton at night - very good stuff.

Sunday 2nd April 2017
After getting to bed at 2:45am and up at 7:30am to take pooch out am somewhat knackered.  Can't be helped.   Did a load in Greenhouse.  Football with Lucy at Chellaston in the afternoon.

Lovely summery sort of a day - pooch was tatered so let her have a kip and give her a bit of shade - bless. 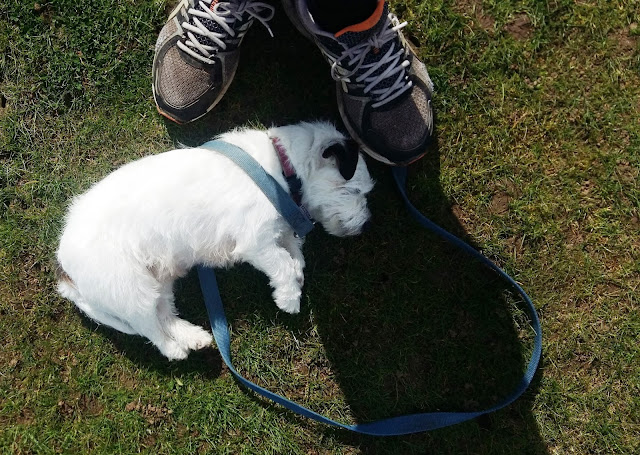 Back home, tea then with dog mithering we went a walk up golf course - still a fair number of folk playing.  Found a few balls all good stuff.  Was dead tired so bed a bit before 10pm.

Monday 20th March 2017
Into office early then off to School for Lucy's parent teacher Consultation all pretty good stuff.  Watched a bit of telly then bed about 10.20,

Saturday 25th March 2017
Cripes Pay Day already.  Up early knackered though.  Papers and dog walk - took any posters that were still up down.  Did a load in the greenhouse.  Golf at lunch time - also didn't play well but a lovely day for it so who cares!

Mowed all lawns, lane, front after the golf - all good stuff. Kip on sofa at 7pm.  Up at 9pm to take dog walk and went down with missus to let Phil's god parents' dogs out.


Sunday 26th March 2017
Mothering Sunday - up at 7:30.  Not brill. Did a bit in greenhouse   Lunch at the Ketch - bit of a pallava with Brother going to wrong pub about fifteen mile away.  Never mind.  Got home - more in the greenhouse and getting a big tub ready for a carrot experiment!!   Missus has bought a banjo as well!!!


Rest of the week stuff also happened but has gone largely unrecorded.

Did a bit in the Greenhouse

then football at Chellaston.  All good stuff.

Monday 6th March 2017
Up early dog walked, papers fetched, the usual.  Into office early doors.   Loads of work, didn't get out until about 5,30, such is life.  Started watching Broadchurch - Ace!!

Tuesday 7th March 2017
Have moved into new office.  It's a bit warm in the morning so opened the windows up wide.  Asked one of the techies to sort me printer out and he asked if I fancied going to the Derby match so got in touch with Dan to get on the Rams Bus ace.  Walked home and got soaked but such is life.   Watched another episode of Broadchurch and then in bed for about midnight.

Wednesday 8th March 2017
Up at 5.30, Dog walked, papers fetched, into the office for 7.22!!!  Started putting in a window into the gate for the dog to see out as we think she's getting dirt in her eyes from looking underneath the gate.    After that got Phil to drop me off a footie practice - hurt me knee but such is life.     Watched a bit of Broadchurch when got back.


Thursday 9th March 2017
Back home a bit late due to doing interviews.  Watered in the greenhouse.  Missed an Iron Cobra double pedal for £51 on eBay bugger.   Put another bit onto the Dog Window - she's beginning to take an interest in it.

Sunday 12th March 2017
Did a bit on lotty, came home as mum and dad came over.  Footie at lunchtime - ran the line for em.  Count Arthur Strong at 8pm at Buxton Opera House - all good fun.
Posted by Paul at 07:40 No comments:

Monday 27th February 2017
No work today - got three days off for Shrovetide and what have you.   Took Lucy to school in the morning sat in traffic for ages.  Did a bit up in me attic learning a Foo Fighter song with a bit of stupid timing in it.  One bar of 9/8 just to make it hard to count.  Never mind.   Picked Lucy up from school sleet in the air.  Went and got presents for Missus' birthday.

Also ferried missus, Lucy and Phil round for Shrovetide.  All good stuff

Wednesday 1st March 2017
Up early, last day of the mini-break.   Got some hours in down at the lotty and got five beds weeded which was good.

Thursday 2nd March 2017
Up early  Dog walked.  Took minibus to work as had a parcel to send off.  Had a meeting and found out I've been seconded to a new role for a few months.

Friday 3rd March 2017
Up early, into the office early, walked instead of mini-busing.  Took some stuff over to new office. Left work just before 4pm.  Back home chillaxed with telly.

Saturday 4th March 2017
Up earlyish (7am!), dog walked, papers fetched, did a bit more in the Greenhouse.  Took Lucy and boss kat for a spin round so Lucy could get pictures for her art studies.  Golf course closed due to all the rain so took the pooch for a walk up there instead - got half a dozen decent golf balls so pleased with that.

Sunday 5th March 2017
Up at 6:30.   Dog walked - clear skies so looked for a brief period as if they'd got the forecast wrong.  They hadn't by 8:20 it was chucking it down.  Had a couple of jobs to do on the lotty so thought stuff it am going to get them done.  Anyway got the little jobs done - screwed a deconstructed pallet to the back of number 13's shed - it holds the canes upright and wind shouldn't be able to disrupt it (here's hoping.