Saturday 4th July
Independance day - got up at 6am, slight headache lets say, fetched papers and back for 7am just a steady three mile walk really. Done some decorating prep and also got a ton of stuff down to the dust cart - getting there slowly.

Golf was rubbish as usual, started with two eights and thereafter it was a waste of time, really. never mind. Harry gave me a couple of tips that seemed to help played last four holes in one-over which was at least a bit better.

Friday 3rd July
Very poor - not really done anything today other than attend a wedding and get a slight hangover!
Thursday 2nd July
Did a very poor four miles on the bike this morning. Can't get going at all at the moment! On the positive side it's two years to the day since I last had a cigarette or cigar so that's some sort of progress.

Wednesday 1st July
Forgot to set alarm so didn't get up to 6:50 - great start to what looks to be a right pain of a day. Have four meetings booked!! Four? I ask you and the last one don't finish til 7pm and then I got an 8:30 meeting tomorrow morning. Great.

Did a two mile walk last night after setting up a new TV/Monitor in dining room - can play either SKY/DVD through it's two scart connections or PC through a standard svga connection - quite pleased with it for £180.

Tuesday 30th June
Got up at 6am after hardly sleeping at all last night - heat and a bl**dy fly that I couldn't swat put paid to any hope of a good night's sleep. Anyway, got up in good time, got ready and it started bloomin raining. So only got a little four miler on bike done which is nothing like enough. Will need to top it up tonight one way or another! sort of topped it up with a round of golf, well ten holes or so - nowt special plodding along as normal.

Monday 29th June
Wedding Anniversary and 8 miles on the bike to start off with. The pledge now is for 55 days with no alcohol and to shift a stone. Will have a weigh in the gym later and see what a stone off will measure up to. Need to stop mucking about though - pics from Saturday tell me all I need to know!

Was hoping to go for a run last night but thunder and lightning put paid to that. Watched Andy Murray battle through instead which was okay. Know what my new start weight is and am not at all happy about it. Am going to start putting a weight graph on from next monday when have shifted a bit of it!

Sunday 28th June
Back from Brum for about 9:30. Hedgecutting the order of the day, will see if it cures hangovers?

Nine holes of golf planned for later subject to getting the garden done.
Posted by Paul at 07:39 No comments:

A picture says a thousand words (think "what were you thinking?" x 250) 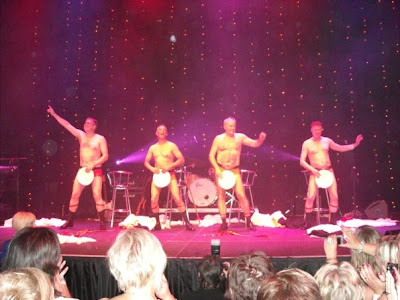 Saturday 27th
Slimming World Oscars do at Birmingham later. Did a four mile run this morning. Things will get worse today believe me. All will be explained tomoz.


Friday 26th
Bit worse this morning! 4 mile bike ride. Did seven holes of golf up at t'club - got a 2-iron off ebay so wanted to try it out - very handy off the white tee at hole 12 I reckon.

Thursday 25th
Only a tiddly little 4 mile run this morning - bit on the knackered side.

Wednesday 24th
Bit tired so went on an 8 mile bike ride. Wahey. Round Mappleton, no problems apart from not having a front light on bike meant that when I went through old railyway tunnel into leisure centre car park I had to get off and push for fear of coming off the path or hitting the tunnel wall! Ace.

Tuesday 23rd
Yes, same again - up for 5:45, on road before 6 and five miles under foot again. It's becoming habit. Evening: knocked off all the tiles in the bathroom and then did 9 holes of golf, nothing much to report but did knock a 3 wood onto the 2nd green that went a cool 230 yards (counted 80 paces to the 150 marker so am guessing it's about 230 - not that I'm bothered it went like a train).

Monday 22nd
Got myself out of my pit a little bit after 5:30am. Got a five mile run in for the first time in a few weeks and did some recycling as well when went to fetch papers.

Dentists was okay - slight mangling by the hygenist, bit of prodding and what have you from Mr Rose then out into the sunlight £50 lighter in the wallet department.

9 holes of golf later, better again - am squaring up me right foot which is stopping the sway a bit I think. Anyway, was striking the ball better that's for sure.


Sunday 21st
Am kicking myself into gear again. Been arsing about since April and have put weight on for sure. Ran seven miles this morning, it's a start. Need to stop feeling sorry for myself I reckon. Get into a self-desctructive sort of a spiral sometimes and I need to start taking responsbility for myself a bit more.
Posted by Paul at 07:53 No comments:

Friday 19th June
Diddly squat. Had a top-secret rehearsal for something which took a good couple of hours so time wasn't on my side but still. More than a bit knackered.

Thursday 18th June
Just a spin up town on the bike again.

Wednesday 17th June
Still not able to get up on time. Just rode up town and back. don't know how I sort mesen out on the getting up mullarkey - it's very poor.


Tuesday 16th June
Knackered again. Still not back to normal yet. Got up 6:30 only time to bomb up town on bike and fetch papers. Tomorrow am determined to run a bit at least!

In Gym 11:30 to do rowing challenge at work. Most distance in 10 minutes. Hoping for 2200ish all being well although it depends on the load setting. Some proper fit folks at work doing it as well so my expectations of glory have been downgraded somewhat.

In the rowing challenge I got to 2435m but was unfortunately pipped to the post by Chopper Woodcock who did something like 2475! Bugger, but he's got 10 years on me so not a bad result by any means. Did 30 minutes on exercise bike and 12 minutes on treadmill after so quite a good session all in all.

When got home took Lucy out for a walk and then did 9 holes of golf which was as usual, a mixed bag!


Monday 15th June 09
As normal since camping I couldn't get up this morning. When did drag myself up it was 6:30 so only had time to cycle up and fetch papers for about 4 miles or so.

Sunday 14th June 09
Not much to report - got out on the FCR1 for the first time in a while. Did a nice 20 miler over to me mum and dad's house. It was a good ride as much of it was along tree-lined roads there was plenty of shade for a fairly warm summer's day. Computer says I averaged 12.8mph which considering it's all hills and what have you ain't too bad. 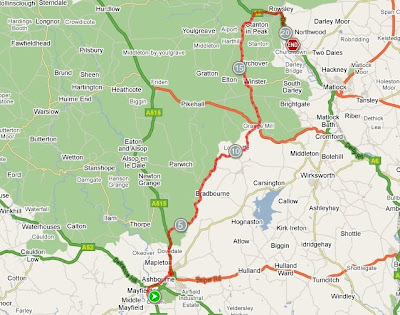 Saturday 13th June
18 holes of golf - very average 45 for front nine, NR'd on the back nine. Nice thing was a 2 on the ninth which gets me a share of the two's pool.

Friday 12th June
Worse yet, gone 6:30 when woke up, fetched papers in car! Need to get me sen sorted reet quick!

Thursday 11th June
Woke up late again. Four miles on bike. In office for 8.15 though so not bad.

Wednesday 10th June
Got up late so only time to bike up town to fetch papers, still four miles on bike must be worth something! Lunchtime got to gym again. 20 mins on rower, fifteen mins on treadmill and some weights - better than nowt!


Tuesday 9th June
Got up at 5am, set breadmaker off, 2 miles run, four miles bike ride, bit of weights not a bad start to the day.

Monday 8th June
Still not happy about the weekend, I notice weather is much improved today. Found out my facebook account was hacked yesterday so I sent loads of folks a mucky video apparently. Whoops.

Anyway, a new week, it better be better than last week. Three mile run this morning was okay. Did some weights, did some golf swing practice so that's a bit better. Going to gym at lunchtime and then will feel back on some sort of track.

Sunday 7th June
eight mile run in the cruddy rain. What a rubbish weekend. Used Mapmyrun.com for a change today. Not sure about it yet. They stick a little advert box on the screen which you can get rid of if you pay a subscription (bit like motionbased I suppose). Any way it was a fragmented run as every time heavens really opened up I made for the nearest tree for shelter. What a pain in the butt, hey ho at least I had luxury of being able to wait out the heavier showers. 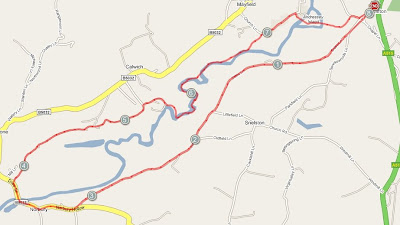 Saturday 06/06/09
Text from bro in Anglesey, jammy sod got a bass last night fishing from the beach. Toady. Supposed to be playing golf at bakewell this morning but dad rung and said it's rained off so that's the end of that. Can't complain though have been out three nights this week chasing the lil white ball.

Friday 05/06/09
Same again barman, done nothing this morning. Few weights then into office. Got some programs to get done for cut-off so needs must. Gym later.

Did a superb effort in the gym - 32 minutes on the bike, 15 mins on rower. Puddle of sweat when had finished on bike so well pleased with that.

Did a hard slog in gym at lunch time then finished off the day with 10 holes of golf so not bad all in all!

Wednesday 03/06/09
Getting worse, got up at 6:35 (this is the camping backlash kicking in) - did weights til 6:50 then fetched papers in car for first time in ages - rubbish. Am going to get into Gym at lunchtime to make up for my uselessness.

Didn't get to Gym but did a six mile run in the evening which was good.


Bad video - something about this strikes me as being pretty darned lame, which is a shame as it's as clever as anything really.

9 holes of golf at night with old set of clubs. Not bad coulda been better, am keeping head steadier through the swing which is one of the things I got to work on. It'll take time.