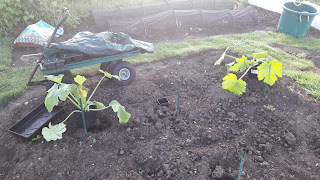 Then dog walked and papers fetched.   Took pooch back home.  2nd trip to Lotty with tray with about 30 odd runner bean plants in it.   Got to get everything out and in this week it's all go to get greenhouse set up before hols. 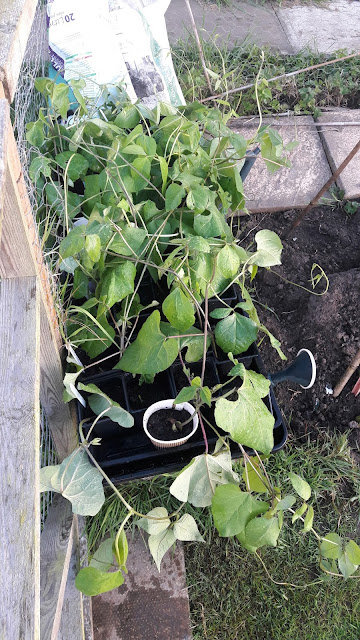 Tuesday 23rd May 2017
Up reet early.   Took some more stuff to lotty.  Took wee pooch a walk up town got papers.  got into work in good time.  got away about 4.20.    Took pooch a walk through the big meadow - got a picture of a comma butterfly which we saw on the walk. 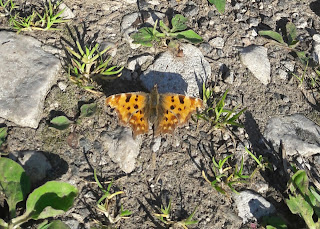 Went up lotty again - got bean rown on number 13 sorted, got some french beans in, Got sweet corn on number 7 in.   Got a couple of pumpkins in, one on 7, one on 13.  Still some more to come. 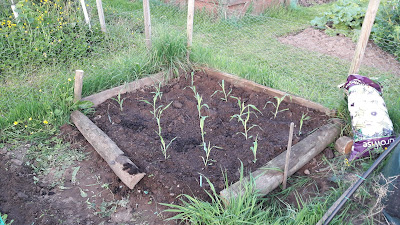 Wednesday 24th May 2017
Up before 5am.  Watering lotty at just gone 5am.  Dog walk papers fetched.  Took marigolds to lotty ready for planting tonight.  All good stuff into the office nice and early too!  Did a shift at the lotty after taking little dog a walk through the big meadow.

Got a load of stuff in the ground and got everything mowed.

Thursday 25th May 2017
Did a load of tidying in greenhouse to get irrigation system in place (didn't quite manage to get irrigration but have got space now to actually do it!.  Then did another shift at the lotty until it was too dark to do any more got loads planted but ran out of time and light to get the second lot of sweetcorn in.

Got everything watered and all the watering cans are full too for last watering - all seven of em. Into the office for 7.40am

Got out of the office a bit earlier at 3.30pm did loads of jobs at home in preparation for going on hols. Gig at the Old Star Uttoxeter so set off for there at 7ish.  Went okay although had some jip getting a good sound from 18" floor Tom.  Got home between  1.30 and 2.00am

Saturday 27th May 2017
Up at 4.30am off to lotty with la pooch.  Tidied up and watered everything to within a inch of its life.  Have got nephew Ben looking after em in the week and hoping for a bit of rain.  Car all loaded up and then off to Welsh Wales. 5 hours or so later finally arrived. A bit grey.  Dug some bait but was so knackered I had a kip and woke up at 5am with dog whining at the door.  Never mind!!

Sunday 28th May 2017
Up at the crack with la pooch.  Did a few parish Council emails.

Tuesday 16th May 2017
Another rubbishy sort of a day at work but the usual overall.  Dog walk. Bit in the greenhouse.  Planted a few stocks in the border, tidied up some weeds I found on the ground (thanks ma!).

Thursday 18th May 2017
A break in the weather at last after three days of much needed rain. Into work for 7.30 everything running slowly today after another night of troubled sleep.  Long day in t'office, got home then went to fix a computer for Phil's god parents.  All done in no time at all back home and then up in the drum attic.   A bit more work on Led Zepp's black dog - getting there now got some semi quaver triplets happening on the bass drum which was one of the things Bonham was famous for.

Everything nice and green and covered in weeds as predicted.

Saturday 20th May 2017
Bloody rained all day didn't it.  So did some stuff in the greenhouse, did a bit of drum attic in the afternoon. Went to see a band called the Mysterons at Shaws in Leek with Paula and Darren.   Got to bed at 2am!  Yikes

Sunday 21st May 2017
Up earlyish.  Dog walk. Down lotty for 3 hours.  Got bean row in Number 13 done - two barrows full of muck just like on number 7.  Weeded onions and pea beds, weeded raspberry area - got a barrow of much on there as well. 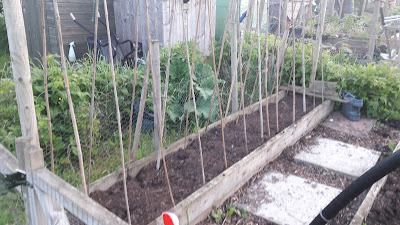 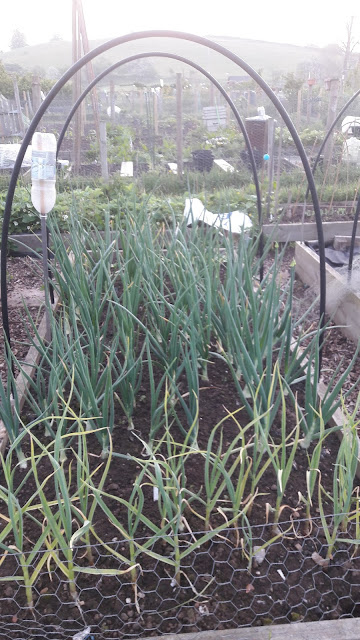 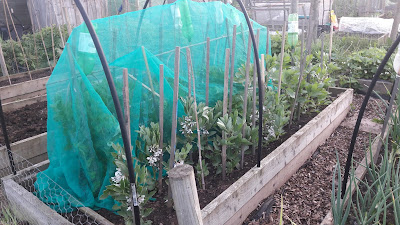 1pm set off for Nottingham to see Jeff Dunham at 3pm - he came on at 3.15 and it was 5:30 when we got out so sat in an uncomfortable seat for three hours or so - bloody marvellous.  Home for 6.45 decided enough was enough!!
Posted by Paul at 06:52 No comments:

Monday 8th May 2017
Up early dog walked, papers fetched, got to car park before bus did so walked the mile into the office and still here for 7.30.   Busy day and then at almost 4:00pm had to run an errand to ruddy Heanor - can anyone do stock control, anywhere?  Never mind.  Back home about 5.15pm.  Tea, then did a bit on the patio project, fitted a new wheel to me wheelbarrow.  Went to Lotty and did a bit - extended the paved area on number 7.  Watered everything then had before went home had a chat with a chap on the lane about badgers and stuff.  All good stuff.

Tuesday 9th May 2017
Up at 5.15, dog walked, papers fetched into office for 7:30am all good stuff.   Al Murray tonight at Buxton. He's gone very sweary but is so quick witted it's scary.

Wednesday 10th May 2017
In work early then over to Matlock for Local Plan Inspectorate Hearings - did my bit, came home found that you can't get through Snitterton Lane over to Wensley any more - progress?  I don't think so.  Did a bit down lotty.

Thursday 11th May 2017
Up early, dog walked etc. etc.   Into office early. Home for about 5.30.  Dog walked up back of Mount Pleasant Farm and then back down through the village.   Went to Lotty with missus, did a bit of watering.


Friday 12th May 2017
Up at 5.30.  Dog walked, papers fetched into office for 7.30 everything running on rails so far.  Took Lucy and me mum to see Habeas Corpus or something like that at Bakewell Town Hall by the High Tor Players which was reet good fun. 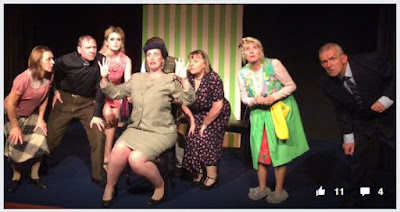 Cut my hand on broken glass before which was less good fun but such is life.

Saturday 13th May 2017
Up early, dog walked papers fetched.  Did a bit of digging on the ongoing patio project.  Bit of Lotty.

Sunday 14th May 2017
Dog walk the usual.  Did a bit of Lotty.   Glorious day you'd be mad not to.   Got more brassicas into 7, done pockets for courgettes and pumpkins etc on number 7 - thinking of having 3 pumpkins, 2 butternut, 2 courgettes or some variation. 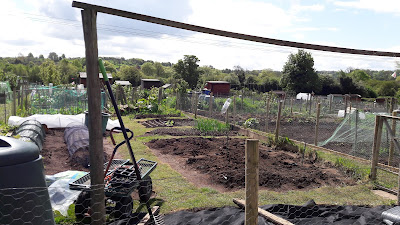 Footie in the afternoon - ran the line - Ashbourne loss 4-2 after leading 2-1 at one point.  Shame they played so well - goal cleared off the line, one off the post/  Such is life

Monday 1st May 2017
Did a load up at the lotty.  In morning got in a row of peas and a row of red cabbages as well as digging a bit out on 7.  In the afternoon I got rid of the last of the brassicas - have got bags full of weeds and garden waste all ovet the shop now will make an effort to get it do the tip tomorrow I reckon.


Tuesday 2nd May 2017
Up mega early.  Papers before they'd arrived then got wheel barrow to lotty from home and watered everything before getting to work for 7:30.  Planning to go straight to lotty after work - load up wheelbarrow with garden waste and get as much as possible to tip in short order
Went again to lotty after work.   Got some compost down, load of weeding, watering, fetched up more woodchip for number 13's pathways.  Planted more sunflowers and sweetcorn in the greenhouse and got some more peas going in gutters.  All going to be ace in due course. 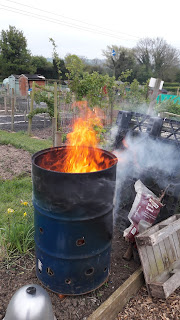