Saturday 2nd September 2010
Sort of a funny muck about run with some cable-tie reclamation. Good for about 3 miles. Then golf at lunchtime - not a bad round really. Some solid driving, shot about 87 off yellow tees which was okay.

Friday 1st September 2010
Didn't find any mushrooms last night unfortunately so set off on a 6 miler round mappleton and found some on the way this morning. Not particularly fast but distance counts! Details Here

Thursday 2nd September 2010
Fetched papers as usual (made it 3.5 miles by looping down watery lane) also done some good deeds cutting down cable ties off lamposts and re-using them to repair a fence that bugs me. Details Did a bit of golf practice in evening. Used a few more of them cable ties to do so ad-hoc repairs to an old gate on golf course while I was doing.


Wednesday 1st September 2010
Blimey 1st of September already. Only whizzed up town and back this morning. Couldn't get out of bed, knackered again! Anyway did a good deed on the way - cut down a load of cable ties of post and used em to fasten back a bit of fence at tin-town. Good deed done. Details of exercise here


Tuesday 31st August 2010
End of the Summer as we know it. Did the same run as yesterday but with a little bit more distance added on as I couldn't shortcut through the tunnel on account of having not got a torch with me (lights come on at 7am I think). So, had to go up the big hill and then drop down into Ashbourne. Watch wasn't working so will have to look up a time when I ran it before and get a screenshot I think. Went out and got a load of mushrooms in the evening - probably only worth a mile and a half so didn't clock it.


Monday 30th August 2010
Am off running in a mo. Need to get my act together and that starts today! Taking Lucy to golf fun day at lunchtime, will see if the grumpy boy will go! Yay, went and did 6 miles round Mappleton as planned. And although a bit rubbish I did it in bang on 10 minute miles which is always acceptable In a Siddall's book! Details


Sunday 29th August 2010
Nothing tracked today but loads of walking in morning to locate the mysterious blackberries. Then bit of golf in the evening under the subterfuge of getting two tubs of blackberries and a tub of mushrooms (well the golf course is where the blackbobs and mushrooms were so had to have the camouflage of golf clubs on me)! Devious bleeder that I am!
Posted by Paul at 06:22 No comments:

Saturday 28th August 2010
Bit of a walk in the morning. Golf at 12:52, played with two chaps not played with before Damian and Dave - shot 92 which I'd have been happy with a few weeks ago, however, I four putted at least twice and three-putted I don't know how many times so wasn't pleased with that aspect of my game to say the least!
Friday 27th August 2010
Just straight up town and back again. Need to start boosting mileage.
Thursday 26th August 2010
Knackered again, sick of cold. Straight up town and back in the rain. Not much fun.

Tuesday 24th August 2010
Not feeling a lot better but don't care - five miles or nothing this morning and time-wise it wasn't too bad - under 9:30/mile which considering am coughing up gunge is more than acceptable. Details Did a bit of golf practice later on that was a bit average but played with the Golf Toy again - t'is a free WindowsMobile app called FreeCaddy - in it's free form it only does yardages to the green but the pro edition which costs a whole £10 (£9.65 at current exchange rate) gives you yardages to bunkers, scoring and the facility to measure the length of shots which I liked.


Monday 23rd August 2010
Not much to report felt like death - walked up town and back in morning for best part of three miles. Night time did a couple of miles up golf course. Hit a few balls. Played with new PDA toy - 123 yards with 8-iron. Details
Posted by Paul at 07:49 2 comments:

Sunday 22nd August 2010
Someone banging like hell in middle of night so show 'oi' out the window and left it at that. Knackered this morning though but up before 8am. ColorMagiced the missus' car which have been meaning to do for some time. Got it for about 2/3s of Halfords Pricing off ebay which I though was acceptable. 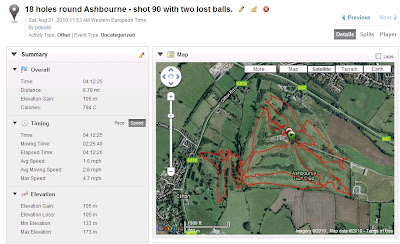 Saturday 21st August 2010
Got up early doors as usual. Walk up town and back to get papers.

Friday 20th August 2010
Struggled to stop the alarm clock again this morning, snoozed three times, got up at gone six so only got three miles done this morning. Might have a 'walk' up the golf course tonight to make up the deficit!

Thursday 19th August 2010
Couldn't get out of bed so only a couple of miles done. Looks like the gps went a bit diddle too.

Did a bit of golf - have made a massive improvement in my golf swing - it's been far too flat so instead of taking club low to ground in the takeaway I'm taking it straight up (or at least that's how it feels) - results have been good so far longest drive on fifth was 274 yards, although only 225 yards on the second - irons much better in the main too. Details

Wednesday 18th August 2010
Knackered this morning and then some! Still did just under five miles in under 10min miles. Once upon a time I'd be happy with that but with the weight on and what have you I'm not pleased at myself at the minute. Need to get my act together. Details

Monday 16th August 2010
Walked and ran 3 miles in morning, another couple of golf miles in the evening.

Sunday 15th August 2010
Played golf with Stuart 'The Cougar' Cope in the Ashbourne Open and two of his pals. Him and Jim came second overall with a nett 63, me and his mate Barry got a nett 69 after three bad holes in the middle let us down - we were a shot ahead after nine, I'd got four pars and Barry had a couple on the front.
Posted by Paul at 07:34 No comments:

Been on hols. Did some running. Did some fishing. Did a lorra lorra drinking and eating. Went to Anglesey County Show which was very good. Went and played Bull Bay and Holyhead golf course both of which were good too. Will update with pics in due course!
Posted by Paul at 07:33 No comments:

Monday 2nd August 2010
2.5 miles in morning - slow though. A few holes of golf in the evening - played first five holes in two over which was nice - some good short game stuff and biggest ever drive down first - will have a look at how long it was later.

Sunday 1st August 2010
Not much to report. absolutely knackered from taking Phil to work at 4:23am for past five mornings. Cleaned out garage yesterday and valeted the cars today all spick and span. Nine holes of golf to finish things off. Golf improving I think.
Posted by Paul at 07:33 No comments: