Thursday 21st October 2010
Couldn't get out of bed even this morning. 6.20 before got out the house, 2.5 miles at I reckon 9:45 but bloomin watch not uploaded again this morning. Will sort later. Did a chunk of work on weight loss figures last night - fascinating stuff.

Wednesday 20th October 2010
Shattered again couldn't sleep, tossing and turning mullarkey - can't get comfy at the moment. N'er mind. Rubbish 2.5 miles at 11min/mile pace which is no good at all but feelin dead tired and had to scrape the car as well. Not ideal. Details

Tuesday 19th October 2010
Good and bad. Went out to Stepping Stones last night, had a couple of bevvies and food besides cause it was Pad's birthday so I had to, that's cleared that up. So this morning had to do a bit extra so I did a full five miles for a change - Details. Lunchtime - given a presentation to boss about learning points from Agile Project Management which I think went down pretty well but more work came out of it!!! Such is life

Monday 18th October 2010
Up dead early as usual. Run up town and back but with a bit of a loop which should have made it around 4 miles but watch went to sleep in Paper shop and didn't come round til just past where the old Nestle gates used to be. Ho hum. Details

Sunday 17th October 2010
Not much to report. Went to Nag's Head, Hulland Ward for lunch which is always nice - very welcoming spot that . Went walk in afternoon. Felt rough again at night so went to bed at 8pm which at least was half an hour later than Saturday night! Am read Frank Muir's autobiography 'A Kentish Lad' which is interesting so far.
Posted by Paul at 07:32 No comments:

Saturday 16th October
Lie-in, didn't get up til nearly 7am. Quick run up town and back, steady sub-10 min miles. Washed both cars early doors before Missus went shopping.
Then fixed the carp rod that he in his wisdom tried to pump a 4oz lead with and broke the spigot in the middle. It'll need a bit of tape but I reckon it'll do a job with floats and light spinning when we go to Bull Bay again. Bad news today is me golf buddy John has got flu so golf is off. Never mind, I'm playing crap anyway - handicap up to 18. So made up some more rigs for next fishing trip - 4 Wessex Rigs (details) and a single clip-down rig which has a SRT spring and one of those clips that hook sits on til it hits the water and is then released. Sign of my age that I can't remember what they're called to save my life. It might come to me later. It didn't come to me however, using the power of the internet I found it on Breakway Tackle's website - it's called an impact shield. That's the scary thing these days how much I can't remember. I don't feel old but am definitely getting older which is better than the alternative.
Friday 15th October
Absolutely cream crackered again - my fault though - watched First Blood, the first Rambo film til half past midnight so only self to blame. Walked up town, ran the last mile back. Badminton on Thursday night didn't help but learned a new shot which was good - the reverse no less. It'll take some time before it's anything like natural. Put a pound and a half on last night a group - that's the back lash from a fortnight ago.
Thursday 14th October 2010
Made the mistake of switching on the PC before heading out - it instantly went into slow-mo mode and took bloomin ages to get going so it was gone 6:20 before I hit the road. Which meant i had to run solid all the way up town and back with no slacking - under 10min/miles I think but the darned watch hasn't updated Garmin Connect yet so I'll have to wait and see what it says tonight. Group and Badmo later. All good.

Meant to mention took all the apples off our little apple tree (think they're called ballerina apple trees). Any way. there were rucks on the poor tree, a good tub-full even after windfall taken away! 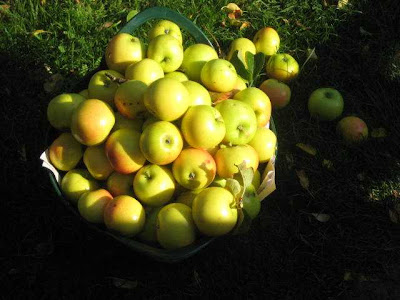 Wednesday 13th October 2010
Run up town and back slowly first thing, into office for 8:25. Fun and games no doubt today.

Tuesday 12th October 2010
Did a run up town and back in the morning. Got home from work and had to go back as someone had turned up for an interview that I thought was on the wednesday, such is life.

Sunday 10th October 2010
Not much to report. Did a load of fishing tackle sorting. Fetched a chair and removed a chair for Janette's disabled brother. Ran to Sides Mill and back to see if any chestnuts about - not many too early I reckon. That's aboot it.
Posted by Paul at 07:47 No comments:

Saturday 9th October 2010
Up at 4:20am to take Phil to work. Marvellous. Then little tiny run up to Marks and Sparks and back for about a mile. Then hideous round of golf that took four bleedin hours, shot a terrible 98 partly down to slow pace, partly down to taking four shots from the side of the green to get the damned ball in the hole. Hate the game not the player.

Friday 8th October 2010
Three miles up town and back - pretty darned slow but am absolutely knackered at the minute - up early tomorrow to take Phil to work as well so it ain't gonna get better in a hurry either!

Thursday 7th October 2010
Back to reality, slept like the dead, got up 6 with much reluctance, walked up town, ran back, work, more training, then onwards and upwards. Went to group - lost a pound amazingly - very surprised after the alcohol consumption of the previous week. Then badmo which made my ankles hurt but was good fun all the same.

Tuesday 5th October 2010
Thought I was tired yesterday - I am today - up at 5am, drove to Luton, on train from Luton at 8:12, St Pancras, Tube to Holborn then on to QA for agile management training - which has been a lot more interesting than I'd expected. Really good. Scoped out the hotel at lunch time and am now sat having a Coffee in room 614 Waverley House Hotel! Tea time soon I reckon.

Monday 4th October 2010
Up all night, really tired, worried about work and stuff had got to do but got biggest part of it done by lunchtime which was good. Walked up town and back first thing which was okay. Got a copy of Sea angler to read in hotel on Tuesday (am going down that London for a training course for two days).

Sunday 3rd October 2010
Things been quiet last couple of days! Been to Anglesey again for fishing and drinking so probably put a ton on this week. We went to Penrhos, Bull Bay, Cemaes, Church Bay all were good fun, didn't catch much but found a super new mark at Bull Bay. Anyway, wet overnight from Saturday to Sunday, bit drizzly in the morning but cleared up about 10am. Went on beach with Lucy then pack up and get off home - 3hrs 45mins coming back which was a whole lot better than going when it took us 5 hours after an hour sat on the M6.
Posted by Paul at 18:31 No comments: