Monday 27th May 2019
Up super early, took dog out and got papers.  Got things ready and then set off for Wembley.  Drove down after picking up the others from Ilkeston.  Not too bad getting in and parked up on someone's drive in Wembley.  Then got on underground and went into Camden Town to get something to eat.  Back in almost perfect time - got a coffee and sat in me seat 5 rows up on the halfway line for 2.40pm   Shame about the result - Derby played well and I don't think anyone would have begrudged us winning but we cocked up twice in defence and paid a high price for it.  Villa will be back down next year - don't doubt that. 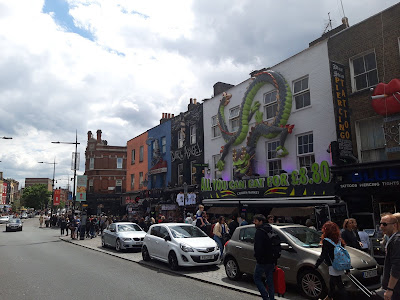 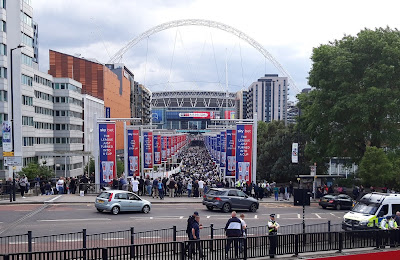 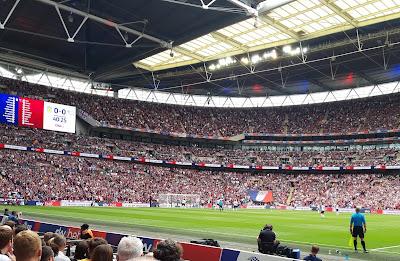 Tuesday 28th May 2019
Up early dog walked, papers fetched, back in the office for 7.30 all good stuff.   After work walked Lily for a mile round the big field loop and then took the big lad out for 2.5 miles down to the lotty and back. 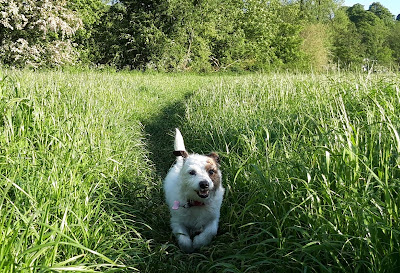 Did a quick bit of weeding, watering and got in a couple of short rows of radishes and beetroot (bit late but hey I'm playing catchup).   Watched a bit of Chernobyll on Sky - interesting. 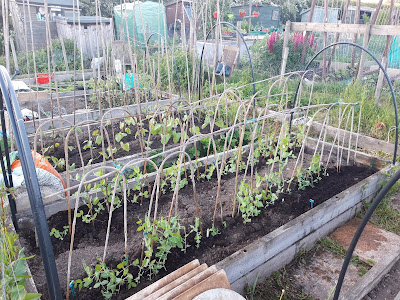 Wednesday 29th May 2019
Up a bit late at 5.30 after waking initially at 3am and thinking I'd got ages.  Still got into the office in plenty good time after walking the dog and fetching papers as always. By time I got back from Work it was proper persisting it down however,  I got just enough of a window in the weather to take Lily and Big Lad a decent walk so not all bad.  Missus S got a new sofa which seems to have freaked the dog out as she proceeded to howl from 10pm to 11pm.   I was proper jiggered after trying to work out what was up with - gave her dog biscuits, took her a walk, got half her toys out of her box.  Dogs.

Thursday 30th May 2019.
Up early considering.  Dog walked, papers fetched into office for 7.20am.   After work took pooch out and then big lad.   Went down to lotty, watered everything and then weeded a bed.   All good.  Got home watched two episodes of Cherobyll.  Now I am very, very tired.

Saturday 1st June 2019
Solar reading 16305.91.   Dog walk, coffee, slimming club - 2lbs on - better than I'd hoped for so not displeased with that.   Nipped down to lotty and got some Growmore and Blood and Bone fertiliser bought. Revamp Rehearsal - all good - tried the new kit out and it sounded awesome - loving it although the floor tom needs a little bit more damping.  Back home for about 6pm and chippy tea - all good stuff.

Sunday 2nd June 2019
Up early.  Down to lotty to do a bit.  got there and found that ruddy pigeons had attacked the goodseberry bush - need to get it netted at start of May next year so played  catch up to start with.   such is life. 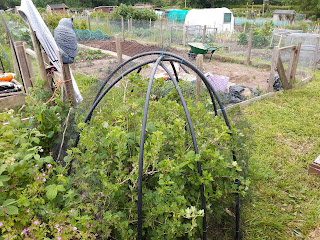 Set off a bit after 8am to see Lucy and have breakfast in Nottingham.  £20 in Wetherspoon's for the three of us - not bad.  Then walked into town, on the way saw the Peregrine Falcon that lives on one of the tall buildings there - what a sight to see one in flight - couldn't get a picture of that wasn't quick enough but saw him/her perched on side of the building. 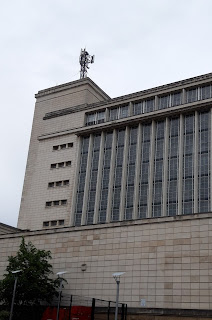 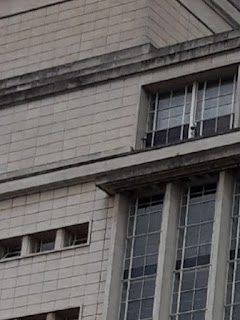 There is a WebCam here :-  https://www.nottinghamshirewildlife.org/peregrine-cam

Went down to Primarnia and then stoofd in the middle of Nottingham watching the cricket on the big screen - ace!

Back home for about 1pm but weather against us - did a little bit in greenhouse and then nipped to lotty with big lad later and did some weeding so about ready for the brassicas going in (late) and sweetcorn I think.

Monday 20th May 2019
Up at crack of dawn as always.  Dog walked, papers fetched, into the office.  After work walked big lad round three miles the usual. Watched Game of Thrones final episode - bit of a damp squib really.  Went down lotty with the wee dog - not sure what I went for?   Saw a whopping great helicopter come past.

Tuesday 21st May 2019
The usual.  Got home from work on time for a change.  Took small dog to lottie - did a sort of temporary fix for the broken gatepost on the plot.  Weeded the onion patch.  Later on when I took big lad out I saw a cracking way of doing onions - you put a sheet of material on the ground with holes for the onions and therefore no weeding - remember for next year - in fact might even do a bit this year using an old compost bag for the cover with holes cut out in it.  2.7 miles with Big Lad down Mayfield and what have you.


Wednesday 22nd May 2019
Up at the crack of dawn.  Papers, dog walked.   Dropped tomatoes off at Dougs on way to work so a bit later than usual into the office but still in for 7:30am.  All good.  After tea went up to lotty.  Did a little bit more fixing on the gate post and then got two pea rows sorted.  Back home for 7.15 then off out with Big Lad.   Decided we would go up to Mount Pleasant farm through the fields then back down the back of the cemetary and what have you.  Not the best walk I've done with him - he managed to jump into a load of mud but the views were good along the way.  Hey ho.
Thursday 23rd May 2019
All the usual, up dead early, papers, dogs etc.  Busy day in the office then off to SW group - 4.5lbs off (the same 4.5lbs that went on last Saturday - can't quite work that out?).   At the minute I'm all off track but have a cunning plan to start in June.   After work we went down to lotty with the peas that I've been growing in gutters for a month or two.  We got those into the ground and then back home for 7.30ish.  Took the big lad a shortened walk due to having stubbed me toe during a 2 mile walk at lunchtime.  Very bruised it is too.  Never mind.   Started watching a film called Super 8 I think - very good elements of Close Encounters, Goonies and a number of other films - will watch ending at some point!  Watched a bit of question time and then off to bed.

Friday 24th May 2019
Almost didn't get up in time this morning - 5.14am.   Did all the usual.  Have put me runner beans out this morning to start hardening them up.   Will put them back in the greenhouse tonight and then perhaps get them in the ground tomorrow. After work went to Nottingham to see a band called William the Conqueror supported by a band from Ilkeston called Those Howling Sounds.  A good night got in at 1.30am a little bit tipsy it has to be said. 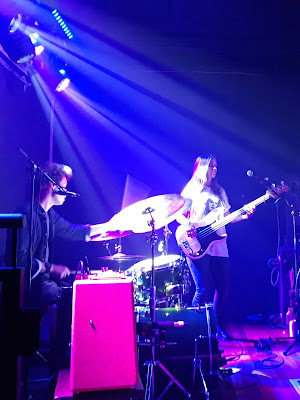 Saturday 25th May 2019
Up early.  Papers fetched.  Little hungover.  Did tons of potting in the Greenhouse which I need to be getting sorted out for Tomatoes soon.  Delivered the runner beans and french beans down to the lotty. Took Mr H's birthday present over.  Took big lad another walk.

Sunday 26th May 2019
Went to Lotty early doors, got bean row up and runner beans in. 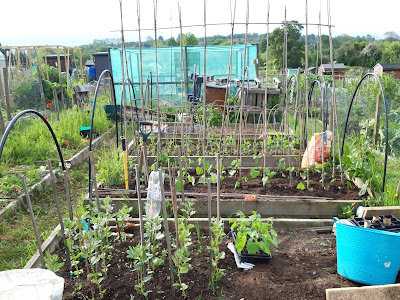 Only had an hour and a half as Missus wanted to go to Alstonefield Car Boot - it pi$$ed it down on us!  Such is life.   Over to Ratcliffe for a family do in the afternoon - good fun.  Got home about 7.30 took big lad out.

What have I been up to?  Loads.  Have walked ruddy miles with various dawgs.  Been to see Derby win their last few games then lose to Leeds at home with a dismal performance only to play an absolute blinder at Leeds when I was stuck in a Parish Council Meeting.  From a work perspective I have never been busier but managed to deliver an impassioned presentation on plastic pollution and what people can do to reduce/reuse/recycle etc.

Sunday 12th May 2019
Done a first gig with ReVamp went well all things considered (especially when we only started three months earlier!).   Sunday afternoon 5:30 kick off how wierd is that!?!


Friday 17th May 2019
Work then went to see a band Dogs on Bees?? at Empire Club very good.  Drank a little bit too much, nothing new there!

Saturday 18th May 2019
Rehearsal with Revamp. Dog walks etc.
We went for a meal at the Royal Oak which was very nice.  While was there I made the mistake of putting a last minute low bid in on a Tama Starclassic Birch/Bubinga and won it.  Never mind!


Sunday 19th May 2019
Up at 4:30.  Drove down to Swindon, well just outside of Swindon at a place called Ashton Keynes, pretty as anything - got back home for 11.30 and started cleaning it up and checking it out.   It's as pretty as anything.  Tama Starclassic Birch/Bubinga 5 piece with weird snare stand (might have to get rid of the snare!)


After lunch started to get ready for the Derby County Play Off Final general ticket sale at 2pm.   Only had 6692 people in front of me, only waited for an hour but just managed to get a ticket and a really good one at that.  Well pleased.   While waiting in queue for an hour I sorted petrol strimmer and stuff out ready for a session at the lotty.  Once ticket was sorted out we were off down there to get grass sorted out and pull out some shitty nettles (bloody things).