Monday 26th December 2016
The usual routine of getting the papers and dog walking continues!   Did a load of drum tuning with a new gadget what I got - I don't know that I've got the hang of it yet but we keep trying!!

Wednesday 28th December 2016
Up at 5:30 am getting like Jack Reacher (?) in that haven;t used an alarm clock in months and months.  Fetched papers early doors, got ready and off to work to arrive for 8am.  All good stuff.

Thursday 29th December 2016
In the office again for another day of fun!   Got all the music gear put away so that needed doing  also brought me dums from 32 year ago home.   Will get them up in the attic at the weekend.   Tuned up the 10 and 12" tama toms again - watched a guy on t'interweb doing it and they sounded mint.    Watched some more Wayward Pines - one episode to go of this quality stuff!

Friday 30th December 2016
Up at 4am due to going to bed early last night, I think.  Lay awake until 5:20 then took dog out.  Got to be done.   Into the office for 7.45 after stopping off at Tesco for Rhys' birthday stuff.     Bought me Xmas present from off the internet some recording gear for me DrumAttic - will be in trouble with the missus no doubt but she did okay some of the expenditure...

Saturday 31st December 2016
Bloomin heck - last day of year, me birthday no less, counting backwards from here on in.   Ordered some recording stuff from Gear4Music yesterday at 10:25, picking it up at MSR paper shop following day before lunchtime - for £2.99 delivery charge no less - you can't beat it!

Monday 19th December 2016
Hell's teeth it's nearly Christmas and I've done next to naff all (I've been told).   Up early, dog walked. Papers fetched.  Into office for 8am.


Thursday 23rd December 2016
My last day in the office and the the usual work shindig which went okay in the end given the limited amount of practice!!  Finished about 4:30pm back home for 5:30pm.   Christmas can begin!

Sunday 25th December 2016
All the stress comes to a head on Christmas day but once it's done it's done!    Got some ace prezzies and had too much to drink and eat as always!!  Never mind.

Monday 12th December 2016
Hell's teeth, Christmas is coming at a rate of knots not done any shopping really yet.  Never mind have ordered fancy dress costume for last day so that is something.   Tired though.  Up early, dog walked papers fetched.  Doing a bit of practice at work.  Home for about 8pm, dog walked.  Bit of web work for JJCsportingguns.co.uk then off to bed when missus got back.

Tuesday 13th December 2016
Up at the crack.  Dog walked, papers fetched.  Off to work early got petrol on the way all good stuff.

Thursday 15th December 2016
Longish day at work then back home a bit early.  Tea then off to speech day at QEGS - Lucy got an award for IT, fantastic music and a really good evening was had by all.
Friday 17th December 2016

Up early.  Dog walked, papers fetched, moved a ton of band stuff about.  All good stuff.   Went to Burton to get some stuff for the works band - totally stuck in traffic - hours of fun.    Never mind back home for 6pm.   Watched Die Hard 4.0 - better than I expected!!

Saturday 18th December 2016
Up early, the usual.   Did some fetching down of stuff for Xmas plus trips to recycling centre - moved Lucy's chest of drawers - got her computer desk in place - needs a new chair as we have got one that is too tall!   Such is life.  9 holes of average golf.   Off to see Jonny Bigland's DC d DC tribute band in ear drum imploding fashion!

Monday 5th December 2016
Up early, dog walked, papers fetched.  Car loaded with drums transported into the office.  All okay so far.   After work waited until 7:15pm for DMs to go then gave it up as a bad job.

Wednesday 7th December 2016
Bit of a practice with t'band

Thursday 8th December 2016
Went to council meeting to have a bit of a rant - found out 3 minutes is soon over!!

Friday 9th December 2016
Busy day at work - an hour or two of rehearsal after work then went to Ilkeston to see Bill and Craig who used to be in a band with 25/30 years ago play with their band Steam Kittens for the first time in 21 years - rate good. 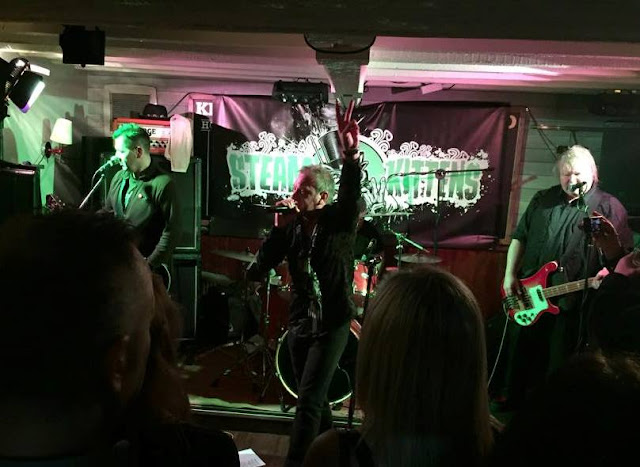 Saturday 10th December 2016
Up early.  Took pooch for grooming, Morrison's breakfast and a tiny bit of shopping for drum stuff (least said).  Then back home - 9 holes of golf.   Then out with Paula and Darren at the Coach and Horses, Fenny Bentley - very nice.  Late to bed though.


Sunday 11th December 2016
Up early.  Dog walked.  On Bus for Derby  - in pub for 10am with Mr Richard Doar - several drinks later and at the match just in time!   90 minutes of pain for Forest and then force marching to catch
the 2:30 bus which I just managed!! 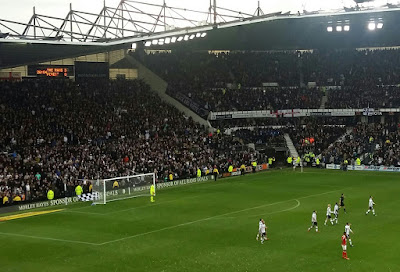