Monday 18th December 2017
Cripes it's almost Christmas, where has the year gone?  Up early.  Dog walked, papers fetched. Work, home.   Watched "Fantastic Creatures and Where to Find Them" film which was quite good.

Tuesday 19th December 2017
The usual.  Watched Central Intelligence Agency film which I've seen before but was alright. Janette's brother gone into hospital so had to sort out tea for the boy.   Lucy did herself a jacket potato bless her.

Wednesday 20th December 2017
Up early.   Dog walked, papers fetched.  Dropped a card off for Doug and Heather - took a bit of finding in the dark.  Into office for about 7.40am.  All good, bid on a new drum kit and lost - really pleased about it too - what was I thinking.  Got home and got working on fancy dress (well did a bit and Lucy did a lot!)

Thursday 21st December 2017
Fancy Dress day.  Up early, dog walked, papers fetched.  Loading up car with stuff.   Going as the Fab Four (because there's four blokes in our team, it's the 50th Anniversary of Sgt Pepper and I'm nearly fifty etc.etc.).   If the stars are aligned etc.etc. 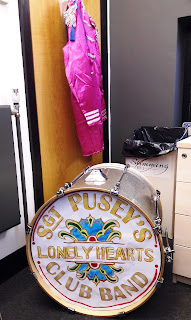 Saturday 23rd December 2017
God knows what I did. Put lights up did some stuff in attic probably.  Muchos clearing up

Sunday 24th December 2017
Bit more of the same up in the attic getting stuff down for Christmas Day. etc.etc.

Monday 11th December 2017
Back to the land of work.  No hassle driving to work just went a bit steadier.

Tuesday 12th December 2017
Yikes proper cold. -7 at Clifton, -6 parked up in Ashbourne to fetch papers.  Little dog is in her coat so it's all good. 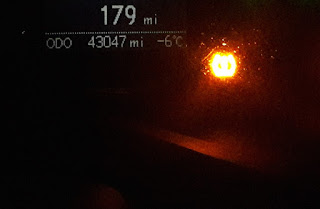 Friday 15th December 2017
Got the missus and Lucy tickets for Bastille in Sheffield - row C no less!

Last gig in Ashbourne for Breaking Poynt.  All good stuff. 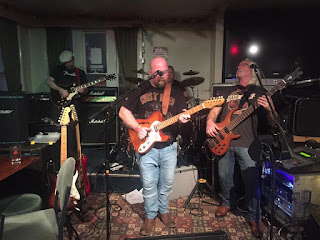 Saturday 16th December 2017
Spent most of day mucking about trying to work out how could fit missus and drums in car and in end missus didn't go!  Never mind, got Xmas lights up - they go for absolutely miles!  Ace.  Last Breaking Poynt gig ever never mind.  All got done saw some old friends which was great. 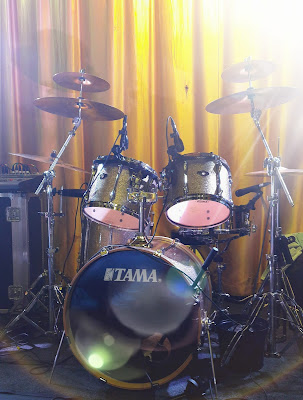 Monday 4th December 2017
Up early.  Dog walked, papers fetched into office in very good time.  Chasing about sort of a day.  Such is life.   Back home a little after 5pm.  Dog walked then up in the attic returning it to it's status as proper Drum attic.

Wednesday 6th December 2017
Back with a bullet today.  Up super early and into office for 7.30.  Good stuff.   Got home, tea then dog walked - raining so a nice short one. Did a bit up in the attic.  Working out the tricky bit of ZZ Top

Friday 8th December 2017
Same again barman.   Had a drink or two as it was the weekend after all.  Nearly bought a DW kit - glad I didn't because bad news was on its way.

Saturday 9th December 2017
Got a letter from inland revenue - I owe a fair chunk of unpaid tax it would appear -fancy sending that a fortnight before Xmas - our souls.  Did a bit up in the attic.  Went to see JBs band at Rocester Football Club.  Good support band in Devilz Jukebox I thought 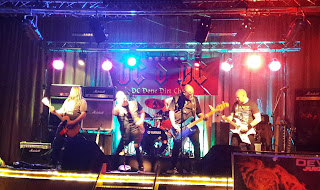 Saw Raymondo, found out we're playing a party there next week!! All good stuff - we had concerns about the 20cm of snow predicted for midnight but of course it never appeared.


Sunday 10th December 2017
Dog walk, bit of snow about, nothing like forecast.  Got some Christmas Lights up outside after making a fake Christmas tree for some of em to go on.   All good.