Woke up early but as it's a bank holiday I didn't bother getting out of bed until 7am.  Fetched papers with the pooch in the rain.  Been chucking it down from small hours.  Doing a few jobs on the laptop this morning.  Saw this chap on Vintage TV a few weeks ago called Jon Allen, bizarrely he is doing a date at Alstonefield Village Hall so I might just have to go to that one - we'll see.   Did a bit on the lotty in the rain - put a shelf up in Shed 7, moved the door latch to accommodate the big water barrels. Weeded some of 13 and banged some lime down for the brassicas that will be going in shortly.    Took missus to John Pye Auctions in the afternoon to look at lots.  We'll probably end up paying over the odds on some tat but such is life.  As Phil was doing his Citizen Siddall thing and boss kat was out and about I had to cycle down to the Farm and do the chickens for Phil's godparents.  Absoluetely drenched but such is life - got half a dozen eggs! Bed late waiting for the citizen.


Tuesday 1st September 2015
Hell's teeth it's September.  Wierdly August's solar generation was only 4% down on  1st year estimate for August so not a bad result considering how grey and miserable it seemed to be.   Up at 5.45.  Dog walked, papers fetched, into the office for 8am.  On rails.  Good day - solving a problem but possibly uncovering new ones!  Tea about 7pm then down to the farm to do them hens - another half-dozen eggs.

Wednesday 2nd September 2015
Up 5.45am.  Papers fetched dog walked, few little jobs in greenhouse and  outside.  Going into office a bit late as have got to go and collect something from Uttoxeter for the boss. Job done and into the office a bit before 11am.  Worked til 6:30 on some interesting stuff.  Home for a bit after 7pm.  Hens done, dog walked.  Bed for about 10.30

Thursday 3rd September 2015
Up a bit before 6am.  Dog walked, papers fetched, greenhouse watered.  Dropped two old garden furniture chairs off at the allotment.  Into the office for 8.20am. Another mega busy one. Back home for 6pm.  Picking up slabs near Tean for the allotment with Phil and his tractor by 6.30.  Back home again by 7:30, tea then down to do the hens took Lucy so she could get some eggs, trouble is by 8 o'clock it was dark and the hens retreat to their perches.  Bed by 10pm back will hurt tomorrow and no mistake.

Friday 4th September 2015
Woke at 5am thanks to Phil's alarm.  Didn't get up til 5:50am though.  Dog walked, papers fetched, greenhouse done, into office for 8.20 after getting some bits for a birthday fuddle at the office.  n way home I followed a motorbike with pillion passenger and a single wheel trailer attached - have never seen anything quite like it  - very Heath Robinson affair. 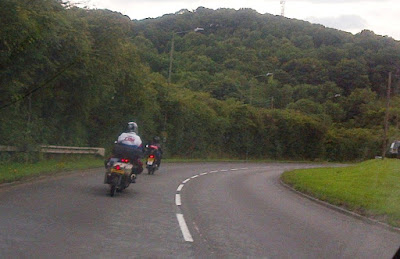 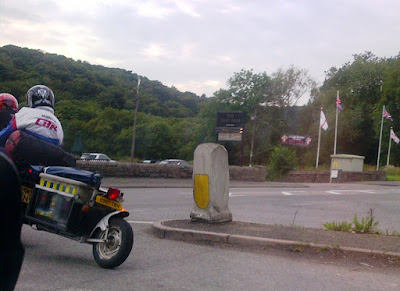 Saturday 6th September 2015
Up early, dog walk, papers, piccy B at 8.20!!  Did a few greenhouse jobs.  Worked on a network install for later in the year - bought 4 access points and a router for under a tenner!   Ace.   Anyway, that took a while to get going but it will work I think.  Did a bit of web work.  Down lotty with missus - pulling up me spuds and stuff.  O

Sunday 7th September 2015
Up early again.  Dog walked, bit of brekko. Down the lotty for 8.15am.  Did loads - pulling spuds, garlic, fennel then left about 12.15ish for sausage and bacon cob.   Fun and games with tractors in the afternoon giving Phil a hand - nice when you rise to the level of last resort to give someone a tow!  Over to me mum and dad's very late for tea.  Dog got a little walk up Whitworth Road, Red Arrows flew over twice (they really didn't have to do that). 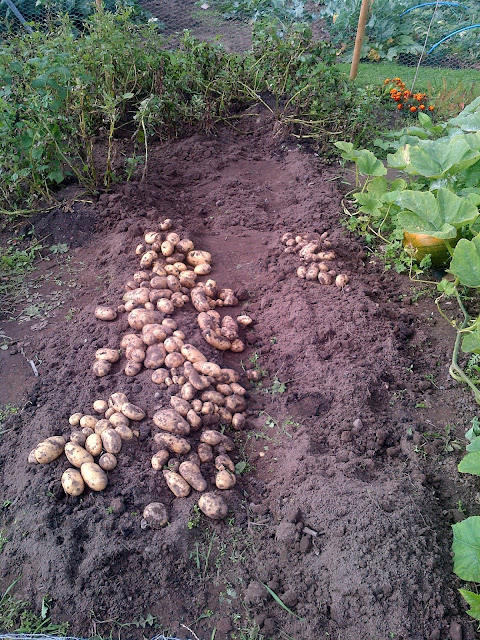 Monday 24th August 2014
Woke up at silly o'clock but stopped in bed until 5:40.  Took pooch out, got papers.  Quite tired, lots to do.  Opened up the greenhouse, watered stuff.  Checked on the Xmas spuds project!! Into the office for 8am.

Wednesday 26th August 2015
Woker up at 4:30.  Rain panning down, most irritating.   Took dog at just gone 6am, Still raining so put her little coat on, hee hee.  Can tell Summer is done by the fact that Sainsbury's sign lighting is on when I walk past now.  Seems to have gone quick - have not even been camping yet. 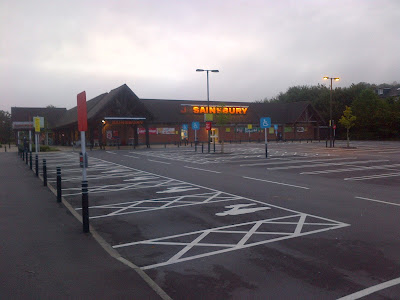 Fetched papers.  Into office for 8am.  Tea, Dog walk, hens fed.  Down lotty.  Weeding, runner beans, french beans, broad beans, raspberries harvested.  Walked home.  Watched a bit of Outside Edge - a reet blast from the past.

Friday 28th August 2015
Off work - got up at 8.15!!!    Dog walked, papers fetched.  Lotty in the morning.  Took missus and Lucy to Stepping Stones.  Lucy had sleepover guests so had firepit going so they could do marshmallows etc.  Also had to do Cluedo which was great.

Saturday 29th August 2015
No golf.  Lotty again getting water butts sorted out on number 7. Piccy B with Phil in morning.  Wyaston Nurseries in the afternoon got some plug plants and some bulbs for the boss. Chippy tea,  Nothing much to report another firepit session at night.

Sunday 30th August 2015
Up about 7am'ish.  Dog walked.  Phil's car broke down so took him to Ilam then on to Alstonefield where missus is doing a car boot sale.  Back home about 10am.  Sorted out Lucy's brekko.  Then did a load of jobs at home.  Mowed outside, sorted greenhouse tomato supports out, put firepit away - quite timely as it rained later!

Wednesday 18th August 2015
Recommencing the holiday - took missus to Uttoxeter, came back 2pm and it started to rain so allotment work put off.

Thursday 19th August 2015
Up early dog walked etc.  Down lotty got lots and lots harvested.   Mowed round both plots. Did a bit of weeding.  Plenty more to do.  Looks like plot 5 has gone to seed wonder if he's giving it up?  Went a walk and got a tub of early blackberries need to get out again as it looks like being another good year for them.

Friday 20th August 2015
Up early.  Dog walked three times. off to London.  Pics to follow but visited (in order) Buckingham Palace and saw brass band, guards and all sorts going on, Trafalgar Square (don't know why we've not been there properly before, Leicester Square for a big dinner, Covent Garden, Oxford Street, Tower Bridge then back to Euston.  It was expensive in parts but we drove to Lichfield Trent Valley and took London Midland service into London with a day travelcard for London Transport and the cost was £80 for 4 on a family travelcard and you only have a ticket each to carry - thought that was damn good value!  Got home just as Birmingham vs Derby game was winding up - four draws for Derby so far is not looking too good.

Saturday 22nd August 2014
Up early.  Dog walked. Did a little bit at the lotty. Golf at lunch time - only played 14 holes as group in front very slow and wouldn't let us through so went up 13 instead of playing 9th.  Karma got them though as it absoluetly hammered it down with rain when on way back home.  Serves em right. Chippy Tea.

Sunday 23rd August 2014
Up early.  Dog walked.   Down lottie - got some runner beans and some french beans, a celeriac (no idea of spelling) and some spuds (just one plant resulted in the haul below!), did a bit of weeding and then back home for 9:30. 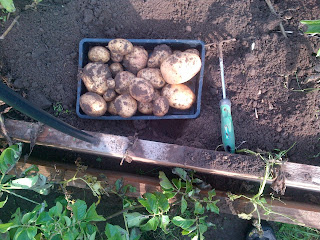 Took pooch for her 6 week grooming and did a bit of shopping in Belper.  Coffee and a bacon buttie at morrisons very nice indeed.   Problem is that you can barely see difference now we keep her in good nick but you can feel the difference.

Got a load of bargains in Morrisons and B+M all good stuff!  Down lottie

Saturday 8th August 2015 - Saturday 16th August 2015
We're all going on a Summer Holiday.  Anglesey again, five and a half hour trip again (but got there).  Didn't go fishing first couple of nights went with our Andrew to a couple of marks but nothing being caught apart from odd dogfish.  At Llam Carw we saw porpoises.  Fishing was very indifferent although Phil caught "one sea-bass and one dogfish, doo dar, doo dar" after arriving about half an hour earlier on the Tuesdsay.  Got out on the kayaks when sea was calmer although still didn't catch nowt on them beggars.


Wednesday 12th August 2015
Went to Anglesey Show - good fun as always.  Out in yaks at night 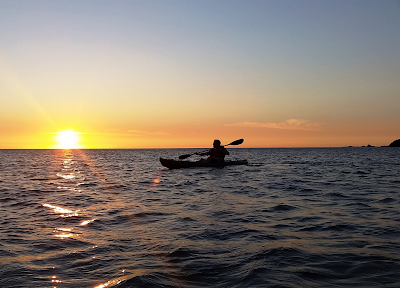 Friday 14th August 2015
Last day.  We visited Cemaes and then went to Amlwch for top fish and chips and a walk round both. Fished the beach at night - nothing doing.


Down lotty harvesting. All good stuff.

Got a tub in the greenhouse for Xmas new potatotoes we bought from the legendary Stermat!  Soon as some tomatoes is finished there will be another one going in.

Sunday 16th August 2015
Allotment in morning over to me mum and dad's in afternoon for me dad's birthday.  Very nice too!

Monday 3rd August 2014
Went to bed really early last night so woke at 4am but stopped in bed until 5:30.  Dog walked, papers fetched then into the office at 8am as usual.  All good stuff.  Watched a marathon session of True Detective Series 2 - just the finale to come now.  Excellent TV

Wednesday 5th August 2014
Overlaid, didn't get up til almost 6am.  Rapid dog walk and papers fetched.  Work.  Group after, pound back on - get what you deserve.  Home, tea.  Changing things round in the greenhouse.  Got some more tidying to do.   Swapped water butts over.  Taking the one out the greenhouse down to the lotty to go on number 7s shed seeing as how Citizen Siddall don't want to finish the job off.  Bed at 11pm way too late.

Thursday 6th August 2014
Up at 5:30.  Dog walked, papers fetched, into work before 8am all good stuff.  Back home for 6.15pm.  Tea. Dog walk.  Down lotty to get a ton of raspbobs and stuff.   Getting things tidied up.   Watched cricket when got back - amazing stuff skittling Aussies out for just 60 then putting on a 200 run lead for four wickets.   Also got a new golf standbag that has a bit of rub on the back pocket but the chap let me have it for £14 - well pleased.

Friday 7th August 2015
Up at 5.30, dog walked, paper fetched, brekko, office for 8am.  Got Fantasy Football team sorted for in-house league.   Half the players I don't know but never mind I have every confidence of winning the league! 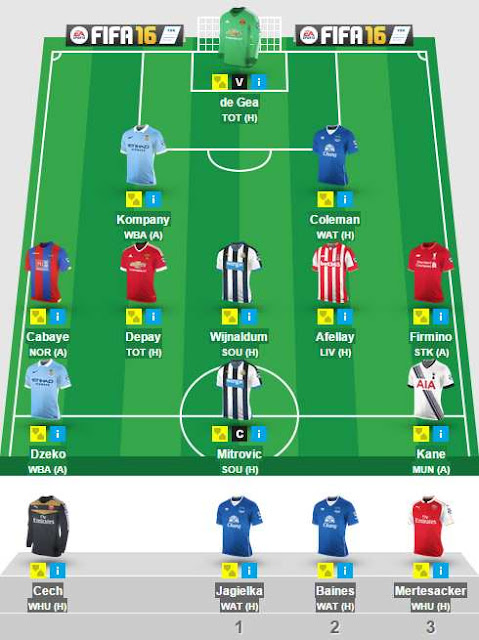