Thursday 30th September 2010
Walking dog as usual - have used yesterday's mapping as am doing same route pretty much every day! Up at crack of dawn, 3.5 miles, 2 miles walking, last mile and half running. Dog slowing me down but he goes back tomorrow bless im. 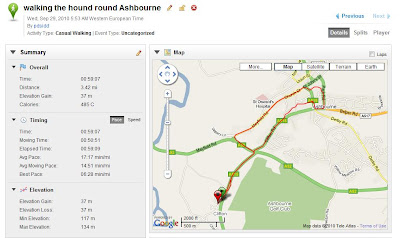 Wednesday 29th September
All quiet of late - been working hard and taking the dog out and about when not working hard. 3.5 miles seems to be the order of the morning and a shorter one at night. Details here.
Tuesday 28th September 2010
Early again took the Mutt out two dumps, a million wees and three and a half miles later was back at home. Walked 2.5 miles, ran the last mile and a half - quite good fun specially when he sees a rabbit - takes some holding back he does considering he probably only weighs three stone wet through! Took him out last night for a mile with PJ which was a lorra laughs - Phil will walk the mutt but draws the line and picking up the deposit!

Monday 27th September 2010
Up early - 3 miles with Charlie boy, a bit of running was good for the mutt and me. Same as last night in terms of dumps, he can't stop as much if you run him though!!

Sunday 26th September 2010
Not much to report on exercise front but got a ton of shredding sorted, done all the recycling, got a load of golf clubs boxed up and ready to go and all manner of stuff (even baked a cake!). Had a bit of a thrash up the golf course - need to get a more upright swing still - made some improvement but keep falling back to a flat crappy swing. Hey ho. 6pm Charlie boy the greyhound arrived. Talk him a walk before bedtime of about a mile or so - he did two dumps and about three hundred wees in that short distance. Amazin animal - you never see them do that when they're chasing a fake rabbit on a track do you?
Posted by Paul at 07:45 No comments:

Friday 24th September 2010
Badminton last night given me shin issues this morning. So walked up and ran back from Town. Forgot to switch watch back on after getting paper so mileage is a load of old rubbish. Maintained at group which was disappointing but such is life.

Thursday 23rd September 2010
A rubbish four miles with lots of walking. knackered. Did another two last night as well. Details

Wednesday 22nd September 2010
Didn't sleep well at all - back muscle really killing me. Anyway up early, did a bit of work then 3.5 miles up town and back to fetch papers. Details. Have been selling off odd clubs here and there and have invented me own triangular packaging which is well cool (perhaps invented is too strong a claim) but putting together a robust design has been good if long-winded fun. Any road up, details of this morning's run are here.

Tuesday 21st September 2010
Steady run up town and back - been making boxes for sending off individual golf clubs last couple of days ace fun if very unprofitable! Never mind - such is life. Anyroad up - three miles this morning at about 9:20 pace which was perfectly acceptable. Got a right pain at back of ribs on the left hand side didn't have it before set off am putting it down to having a second layer oon this morning. Detail

Some pics from run on Sunday 19th September 2010

In centre of this pic from Calwich Abbey is a folly where it's rumoured Elgar (I think I was told) was inspired to write something or other. Apologies for vagueness but I was told a few years back. 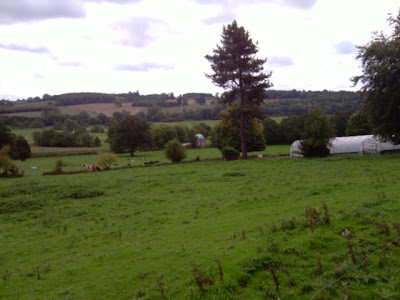 Below is pic of bridge at Norbury - just inside Staffordshire, a minute later I was running in Derbyshire again and feeling much better. 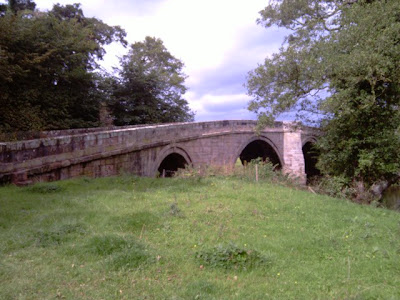 This is a weir near to Norbury a little futher along from the bridge. I was surprised at how boggy this little path has become - when me, Lucy and the missus walked along here in Summer it was glorious I'll be avoiding the path until next Summer though which probably about when me shoes will have dried out. 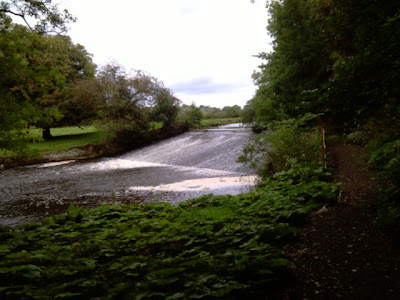 Monday 20th September 2010
Had jobs to do so the route was straight up town and back again. 9:30ish miles today as legs knackered from yesterday's exertions! 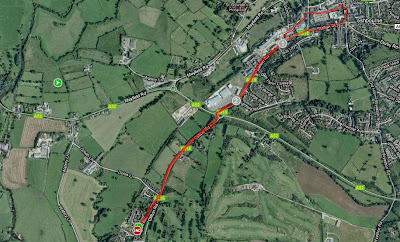 Below is the mapping of the golf from Saturday - what I found is that if the screen-saver or autolock comes on then it stops tracking and you get the straight lines as shown below. So it reckons I only did 4 and a bit miles which is normally works out between five and six. Lesson for the day might be to hit the ball straighter! 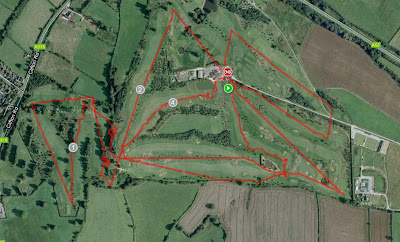 Below is the Sunday's run note - the start position and end position should have been the same which instead of it being an eight mile run would have been nine miles if I hadn't mucked about with the phone doing the tracking! Still it was okay as a record in the absence of having any charge in the phone! 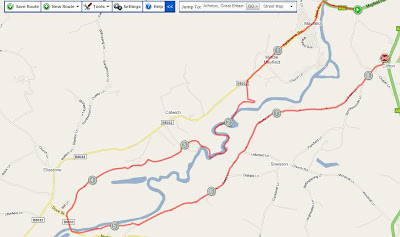 Up early, not too much booze this weekend which is good. Going to go a run shortly and will be taking the GPS Sport Tracker on the HTC again to give it another go. Run was 9 miles ish and average speed was 5.2/5.3 which would equate to 11 minute miles which was okay as much of it was through meadows on the flood plain or through the boggy wood after Norbury.

Saturday 18th September 2010
Morning, got up early, did a bit of work. Got shed tidied a bit, got Lucy's bike and slow but comft bike out of shed. Did a ride up town, sent some stuff off from post office, did a bit of shopping, come back. Downloaded a bit of software called 'GPS SPORT TRACKER' to try out on the Windows smartphone. Took it golfing and it worked okay to an extent - it reckoned I'd only done four miles at the end so not quite sure bout that. Have output the file to GPX and will load it up on PC at work at the HTC doesn't seem to like my home pc. Such is life. Anyway, won at golf again 31 points off a 3/4s handicap was okay I reckon although I imploded on the 7th trying to be Seve Ballesteros and taking 9 on what should be a routine par 4 if you put the drive in the right place (which I didn't!). Three pars on front nine, four pars on back from 14th to17th sealed the deal but it was pretty much all square on the fourteenth so good stuff overall. Will see if I can get the map of the round posted tomorrow.
Friday 17th September 2010
Got up okay, had a ruck of mini-jobs to do and had to take Phil to work ahead of me going to work so time limited. Did a quick 8:40/mile pace run for 2.5 miles to fetch the papers. Details here. Lost 2.5lbs at group last night - about time - then did badminton lesson with Lucy which went okay.

Thursday 16th September 2010
Couldn't get up again - two snoozes - on road at 6:07, five miles and back to base. In work a bit late but had to stop for petrol. Details of run here.

Wednesday 15th September 2010
Strange day so far, bosskat is not well, she got shingles so is not sleeping well at all consequently didn't get up til 6:10 this morning. So a short run was all could manage. Details.

Tuesday 14th September 2010
Got up really early again, 5:45ish, head out of door, chucking it down. Waited as long as I could but at 6:15 decided to make a break for it - did 3.5 miles in the rain which had abated a bit by that time. Did a bit of work on my cable tie removal project - did three this morning.

Monday 13th September 2010
Got up dead early for a week day. 5:35 got ready for a six miler, but was raining so waited. Got out a 6:05ish and got a steady five miles in. Walked at start and then spent the rest of the mileage getting the time back to under 10min miles which in the last mile I did. Details Did a bit of work on the Ty Newydd, Church Bay Anglesey Holiday Accomodation project as well last night - documented a way to the nearest shop in LLanfaethlu

Sunday 12th September 2010
Not done much - got up 4:10 took Phil to work, back to bed, got up at 9:30. Fetched Phil back about 10am. Washed the cars, tidied shed up, put a load of junk on Ebay for free listing weekend. Went over to me mums to picl Lucy up. Went up golf course to get blackbobs and mushrooms and that were just about it.
Posted by Paul at 07:46 No comments:

Saturday 11th September 2010
Took Phil to work at crack of dawn (well seeing as I took him at 4:20am and it wasn't dawn til gone 6 I took him well before dawn cracked. Never mind, ran/walked up town and back to fetch papers and got a bagfull of elderberries for a neighbour. Shot 90 off white tees should have done better not chipping/putting well at all.
Friday 10th September 2010
Chucking it down first thing, couldn't make mind up in end whizzed 2.5 miles in 22:20 which was good for me, sub nine min miles. Details

Thursday 9th September 2010
Up a bit late and knackered. Walked up town, ran back. Continue with the cable tie project. Details Back to Badminton last night - good fun, Lucy was really good at it too.

Wednesday 8th September 2010
Kathryn has mentioned doing the Belvoir Challenge next Feb which is essentially a marathon in all but name. Anyway it means sorting mesen out so must be a good thing. Did 6.3 miles this morning at about 9:30 pace and even stopped to get a few mushrooms on the way round. All good. Details

Tuesday 7th September 2010
Cream crackered this morning but lots to do. Went out did 3.7 miles at a slow 9:50ish pace. Not up for it this morning, no. Details.

Monday 6th September 2010
Off work. Ha Ha. Dropped off missus car for a £260! service at Pentagon Ashbourne. Yikes. Ran back - really quick - am a bit worried about the time - details here


After that we went to Conkers which is a 'theme park' near Swadlincote. I think the theme would be forest-based conservation and environmentally conscious recreation, in a word "dull" but sort of okay as well. We did a ton of walking and it was vaguely relaxing and most importantly Lucy enjoyed which trumps the lot. So a good day.

On way back we went to Burton for a bit of retail therapy - Home Bargains then the poundshop then the macdonalds. Totally, low-rent but quate enjoyable (sort of). Then picked up the missus' motor on the way back and paid a wad of cash. Good fun was had by all. Sort of.
Posted by Paul at 17:42 No comments: