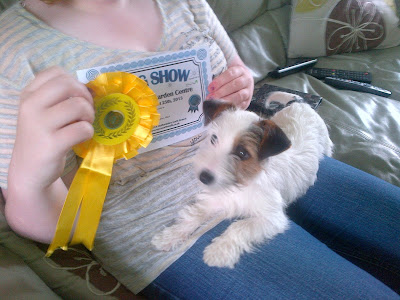 Over to mums for tea. Another walk for the pooch.

Monday 26th August 2013
Got Phil up at silly o'clock.  Got up at 6am proper.  Took dog a walk, got papers.  Did a bit of work on repairing the Penn beachcaster.  Watered everything.  Harvested some spuds out of one of the tubs.  Later in day strimmed round the garden - that machine is a pain in the ass and no mistake.  Then mowed outside, front lawn, back strip of lawn and down the side lane. Fence painting after that and another coat of varnish on the Penn.   Later in the afternoon went for a walk to Osmaston Lakes with Lucy, Lily and the boss.  Beautiful spot I've never been to before.  Twenty plus years and I never knew there was a watermill down in Shirley valley? 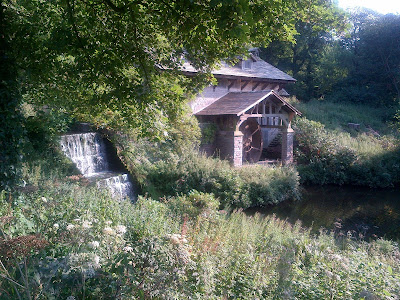 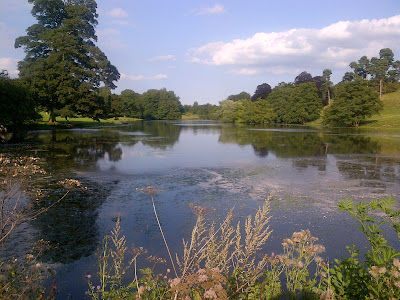 Tuesday 27th August 2013
Up at 4am, woke Phil up, then up again at 5:15 as Phil hadn't actually got up and his mobile was ringing downstairs.  Got him out the house in a hurry, all good stuff.   As bosskat was going up town I thought I'd not take the dog up town but let her have a run round a nearby big field - however Lily dug her feet in so put her in car and fetched papers anyway, evidently she likes a walk up town!   Visited the Consultant at a group in Heage then into office.  All good stuff.  Had intended to go running but didn't - did a bit more walking though.  Few jobs at home then loaded car up with the Boardman Comp ready for cycling to work from Belper.

Wednesday 28th August 2013
Up early to get Phil up - he got off okay today, bless him.  Took dog up town to get papers.  Got off to Belper - dropped some documentation off at a Consultant's house.  Cycled in to work from Belper - according to Strava I had 6 personal bests, a 2nd best and two third best performances today so quite pleased with that all things considered.  http://www.strava.com/activities/78131916 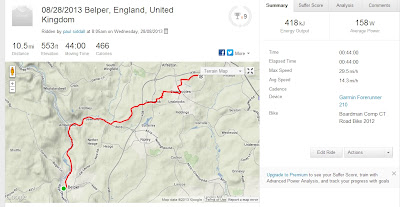 Friday 30th August 2013
Dog walked. Dropped paperwork off at a Consultant's house for a special project. Off to Hollie's Belper group.  Stayed the same - as much as I deserve. Got home, got loaded up, went to Wales - camping in 20 mph winds - must be mad.  Hardly slept all night.

Saturday 31st August 2013
Up at silly o'clock as didn't sleep a wink hardly.  Went to Holyhead, stopped at maccadees for Breakfast then up Holyhead Mountain.   Beautiful views and a decent three mile walk.
http://www.endomondo.com/workouts/239914733/7469884

Afternoon, sat in Sun reading paper, drinkie or two.  Fishing at high tide - avoided blanking with a decent size rockling (half a pound perhaps but that's big for rocklings).  Another night of no sleep to follow - pesky wind also stopped any chance of getting out on the yak. 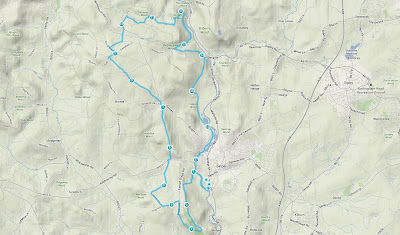 Monday 19th August 2013
Up early but only 6am as Phil's not on early earlies.  Took pooch to get papers - all good stuff.  Off to work nice and early.  Did a bit of a workout in the Gym

Tuesday 20th August 2013
Other than taking dog walk in morning I got nowt done.  Slimming World best of british party at Derbyshire Hotel in the evening so did that and so to bed.

Wednesday 21st August 2013
Up early. Pooch walked to get papers. Into work good and early.  Bit of a workout in the Gym then off to support Tanya Tuck in her group at Mansfield.

Have got a Garmin 210 on a special offer from Sweathshop - think it was £120 in total.   So trying that out. Took pooch for a walk then a bit of golf practice.

Into work good and early.  Visiting groups in Hatton and Rocester this evening.  All good.

Friday 23rd August 2013
Up early.  Dog walked.  Visited Hollie's Belper Group (with pooch).  Visited work with Pooch to get some paperwork sent off.   Got back a bit late but tee'd off at about 11:35 with my dad.  A steady round with a few pars and a beer afterwards, all good stuff.

Saturday 24th August 2013
After hardly playing any golf this summer I've had two rounds in two days.  Played 18 with Doug, 29 points scored so not exactly to handicap but good fun and honours even when all said and done.  We were all square on the 18th tee with Doug having two shots and me only one.  He was at side of green in three, I was close to green in two, he chipped to 12 foot, I chipped to 10 foot, he drops a 12 foot putt in to put pressure on me (the thought of paying out a pound, cold sweat and all that), so I dropped my 10 footer in - all square and a parr on the last is always fun.

Did a ton of jobs round the garden, washed the car, watered everything.

Monday 12th August 2013
Got Phil up at 4am.  Back to bed.  Up at 6am.  Took Lily out.  Fetched papers walking wee dog a bit at the same time.   Into work for 8:30 all good back in the groove by lunchtime!   Legs are a bit stiff after yesterday to say the least! Load of gardening when got home - tied down the beans which were flapping about in the wind - same for tomatoes - have been very good on the food and drink front - need to be for next Sunday.

Tuesday 13th August 2013
Up early doors to get Phil up, up proper at 6am.  Took dog out to do her business then up town to fetch papers.  Cycled in to work from Belper - 47 minutes for 10.25 miles on the Urban Mountain Bike.  http://www.strava.com/activities/74305995 - shower at work then weetabix for breakfast.

Went back through Ripley which involved a 4 minute climb up Butterley Hill and a load of new route exploration.  A few times I overshot a turn or had to have a quick look so it took a lot longer than I'd have hoped for - also one bit was on a farm track so it's going to need a change or two for the road bike! 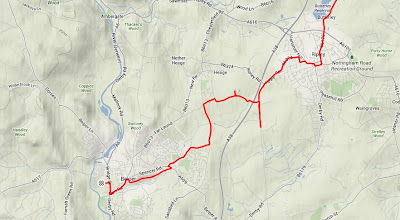 Wednesday 14th August 2013
Had to get home early so no Cycle2Work today and not looking good for Thursday with wet weather predicted.  So took some kit with me and went to Gym for first time since November 2011.  Was okay but the treadmill packed up on me twice - maybe I'm too heavy.   Went to visit Lynne Riley in Eckington and then visited Hollie Majthenyi in Belper.  All good.  Watched England play Scotland - great to see Rickie Lambert score at 31 on his debut (or dayboo as they say in Australia).  Put 1.5lbs on while holiday so that's a result but am carrying too much weight at the moment which will be greatly highlighted on Sunday.

Thursday 15th August 2013
Up early with dog.  Wet though and she wouldn't go further than the Church so not much mileage in the bank.   Into work early - lots to do.  Did another yum session - cool!

Saturday 17th August 2013
Ashbourne Show - Lucy showed Lily in the Terrier and Puppy classes and she got a 'Special' award rosette! Cool. 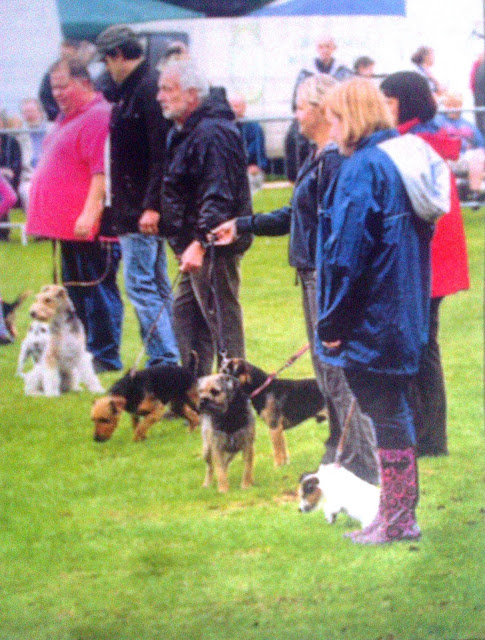 Picture from out of the Ashbourne Stunner - the fox terrier with the chap in the cap won it.

Was on me hols in Anglesey (quelle surprise)!  Not much exercise but a bit of fishing and quite a bit of kayaking done.


Over the week we caught 1 x bass (really close in) , 2 x plaice (v small), 2 x pollock (one tiddler, one 3lb both from kayak in deep water), 1 x dogfish, 1 wrasse at low-water - around a pound.  All fish went back apart from the 3lb pollack which went on the BBQ.

Was surprised that there weren’t more fish about really - think it’s the quietest week we’ve had in August.  It might be due to the masses of weed that were being washed up?  Still the night-sky was awesome with no end of shooting stars on a couple of nights - sometimes you don’t have to catch it’s just nice to be out there.

And must mention my first smoothhound which was caught from a rocky mark at about half an hour after high-water.  It went like a train and I thought for a moment it was going to be a decent sized bass - still nice to get a new species.

Climbed Holyhead Mountain (almost to top) with Janette, Lucy and the pooch but couldn't remember how you get up the last bit and it looked a lot more of a climb than it did last time so we called it quits at that. http://www.endomondo.com/workouts/229919195/7469884