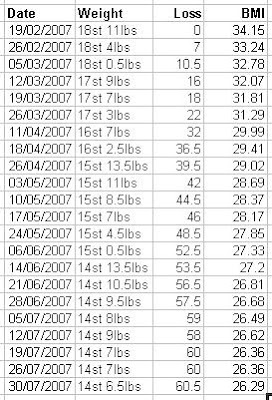 Group was changed to Monday night this week. All went okay – lost another half pound (stats are to the right). Weight loss has slowed up considerably which I’m putting down to a number of reasons. Stopping smoking has had more of an effect than I’d expected but I’m sort of dealing with that. My actions are going well in general I’ve not had a beer since the start of July which will change when I go on me hols but am fully intending to “loosen the Slimming World corset” as my Consultant would say for two weeks and am expecting a gain when I get back of moderate proportions. I’m still debating whether I make an effort to stay broadly on track or not on my hols. I’m debating getting a bike for while I’m out there or doing the running which I started on for two nights but am so into the biking (more of which later) that I’m sort of concentrating all my efforts on that. I’ve been putting the ipod shuffle on then listening to a full album and then some of Black Sabbath, Editors, Del Amitri, Arcade Fire or Editors while I’m out and not coming back in until it’s done. This has meant a departure from the old routine of covering a set route and meant being creative on the route i.e. adding a loop here, going round Mappleton twice, not turning back towards home but going straight into Ashbourne etc.etc.
It’s all good stuff and the weight is crawling past the 14 and a half stone mark. I’m still aiming for a target of 13st 11lbs but I realise that I might not be able to achieve it anything like as quickly as I’d hoped so the small losses are something I’m going to have to get used to. Am still working on my product idea of a combination lock biscuit barrel (wait 'til I get on Dragon’s Den with that baby – I’ll slay ‘em (pardon the pun)). In general all is okay – am mega busy at work but enjoying it more and more lately.
Usual Format Figures:
Start Weight : 18st 11lbs
Current Weight : 14st 6.5lbs (93.07 KG)
Loss this week: 0.5lbs (avg: 2.72lbs per week)
Total loss thus far: 4st 4.5lbs in 23 weeks.
New BMI: 26.29 (Height: 6ft 1.5in (1.87m))
Blood pressure 10 reading average: 121 over 75.3 (in Feb 07 it was 144.9 over 91.1)
Posted by Paul at 18:40