Saturday 24th Jan 2009
Funny sort of a day yesterday - did tons at work, so much that I never got as far as the gym but such is life. Broke my alcohol fast as I went to the pub to watch Derby get a lucky draw against Forest (19 days, not bad). Poor old Nigel Clough must be regretting his decision!

Anyway Friday turned into a rest day which is probably just as well as today had a 14 mile run up to Tissington via Mappleton and Thorpe and then down the trail to Ashbourne and back through Mappleton. Took me 2hrs 30mins which is okay, it's not as fast as I was a few months back BUT no knee trouble and no feeling ill like last week which is an improvement for sure.

Friday 23rd Jan 2009
Bl**dy rain again. Do I hate U.K. weather, dear old Blighty my a**e! Set off running then realised I'd forgotten my rucksack (to carry newspaperrs) so had to return home which meant hadn't enough time so got mountain bike out and did four more miles wet through on the slow, heavy old mountain bike. Gym later. Am getting into the swing now.

Thursday 22nd Jan 2009
Fed up with UK weather. Set out on clunky heavy bike for a change but after four miles was soaked to skin and well fed up so got papers and come home. Did another excellent (in my view) gym session, yesterday - 27 minutes on hill program on treadmill and 21 minutes of cycling on a hilly program with resistance up an extra notch from normal. Today am going back again and intend to have a crack at 48 minutes at 10km/h on treadmill which will be two lots of the 24 minute program.

Wednesday 21st Jan 2009
Did a mega gym session yesterday (for me anyway) 24 minute on treadmill on hilly program (10km/h no.2 incline setting) then 21 minutes on rower. Loads of calories burnt and thoroughly knackered at end of it!

First thing Wednesday morning have been out and done a five mile run but like yesterday the conditions are rubbish. Like dancing on ice in places but without the fancy costume - not impressed.

Tuesday 20th Jan 2009
Icy as anything this morning. Had set out for a run last night but after nearly ending on my butt after three hundred yards I thought it best to give it a miss and headed back home. This morning I had to get out run as a gym session isn't enough so I put five miles worth in up Ashbourne and back. Slippy as anything and the Edge was playing up so happy with 52 odd minutes. 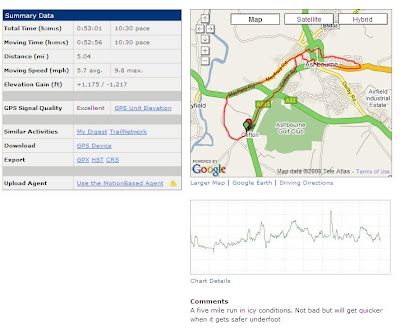 Monday 19th Jan 09
Well, apparently today is supposed to be the most depressing day of the year I've been told at work. If the weather's anything to go by, I'm inclined to agree. Stepped outside at six o'clock only to step back in, pretty smartish. Absolutely bucketing it down so have done nothing so far which is a bit disappointing. Still am going to do a killer session in the gym later.

Did 40+ minutes in the gym - 16 mins on bike 18 minutes running, both on hill programs, then a ton of weights - pleased.

Sunday 18th Jan 09
Good enough start we managed to snatch a draw at golf today, two up on 17th tee and lost that hole and eighteenth to birdies, we did the same a week or two before Christmas. Hey ho.

Then in afternoon rode 23.4 miles to Alfreton. Pretty slow but I was a bit tired. 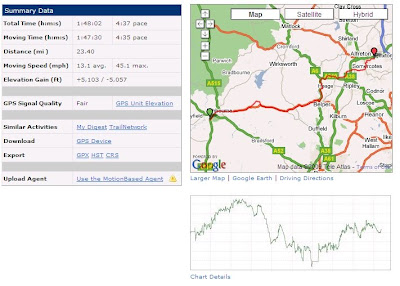