Tuesday 30th June 2015
Up early.  Dog walked. Papers. Work for 8am.  Hot Hot Hot day.  Lotty after work - watering and not much else!! Bosskat came too and got some strawbobs.  Bed a bit late again, bad habits.

Wednesday 1st July 2015
Up early as usual.  Dog walked.  Bit cooler first thing but going to be hot hot hot.  Tons of good stuff at work.  Taking new chap to see Hollie's group later.  Lost pound and a half at group which is a sort of a result all things considered.  Went home to melt - didn't water the lotty as apparently there was a bit thunderstorm yesterday in Ashbourne that hopefully took care of it.

Thursday 2nd July 2015
Woke up at 5:15, still really warm but better than it was last night.  Took dog walk, fetched papers,  Up in attic to get camping stuff down.

Friday 3rd July 2015
Supposed to go camping.  Called off due to weather.  So mowed lawns and a did a few jobs instead. Shattered blade on the big honda, ordered one off eBay.  Took missus to lunch at the Stones, alright I suppose.

Saturday 4th July 2015
Up early.  Dog walked, papers fetched.  Piccy B.  Took pooch for dog grooming.  While that happened got paint for bathroom.  Got home - scraped paint off bathroom and applied PVA bond.

Sunday 5th July 2015
Up early, dog walked.  Two coats of paint on bathroom.  More dog walks. Down lotty dug round shed to rodent proof it.  Got wet through.  Got job done in end though so all good.  Decided 2 coats of paint was enough.  Tidied everything away, hoovered again.  Back to work tomorrow. 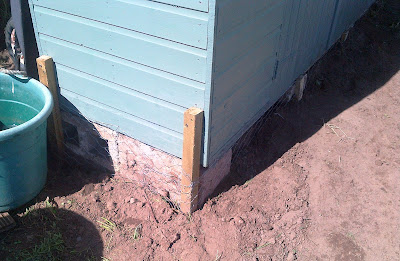