Sunday 17th February 2013
Big run day.  Been on my mind since Thursday when found out it's 15 miles - had been expecting an increment of 2 miles and therefore a 12 miler this week - never mind.  Took pooch out to start day off at about 7am.  Only wanted a short walk really but we ended up doing two miles.  Then back for a cup of  coffee, got togged up and then on the road for 15 miles of fun.  Average speed was a derisory 11m 15s pace but there was stopping for pictures, styles to be climbed and some dirty big hills to boot so not really too concerned about it at all.   Went to Stepping Stones for lunch - bit of a long wait but it was alright.  Took Pip out later in day for a three miler -went over to Snelston then through the fields coming back.  All good stuff - dog mucked up to high heaven but that's pooches that are low to the ground for you! 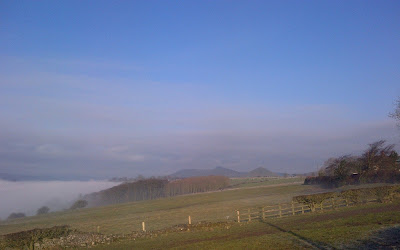 Thorpe Cloud in the misty morning 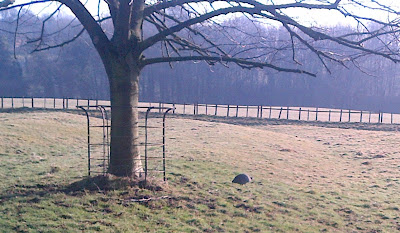 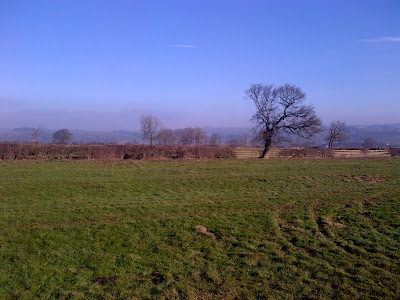 Minninglow in the distance 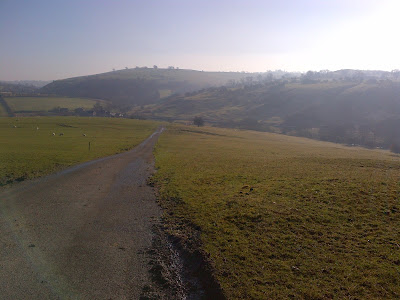 Looking down to the bit that's called Bradboourne Mill  (my run took me up and over the hill on t'other side!). 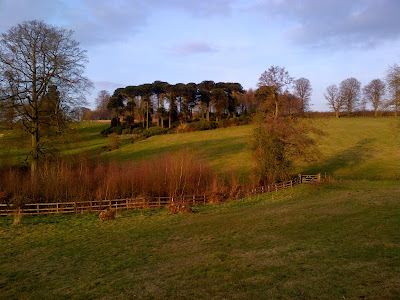 A picture from walk in the afternoon with Pip - I call those trees monkey puzzle trees but they could be called anything for all I know - top walk though.

Monday 18th February 2013
Up at 5:45am,  very stiff, took Pip for a slow walk up town and back to get papers.  Back for just gone 7am.  Into work in plenty good time.  Took pooch a mini walk at night time - she didn't want to go anywhere.  Went out a few times though as was servicing me ABU multiplier reels so was fetching bits and bobs out of the shed.  Was  also keeping an eye on the heavens as I've decided to learn a  bit about the stars - so far can identify Ursa Major, Polaris and Ursa Minor which is a good start I reckon!

Tuesday 19th February 2013
Up early again - woke Philps up.  Took pooch out for a walk.  Did a bit of work.  Went for a blood test.  Went into a work - phone calls to solicitors and police authorities due to work I'm doing currently - all good stuff!   Work done went for a three mile run as pooch is determined not to walk at night - don't know why.

Did a couple of hours work on a website for Orchard Cottage which is a place we've stayed at in Church Bay, Anglesey.   Very good too it is. http://www.sidd.co.uk/orchardcottage/

Wednesday 20th February 2013
Up at 4:10 to get Phil up, back to bed til 5:30, out with the pooch.  All good.  Did bosskat three granary/wholemeal combo cobs before set off to work.  All good. Did work. Went to group, just a pound and a half off but still going the right way!  Am asctually rather pleased with it really, as it takes me into the next big number.  Still a good way to go but getting there gradually.

Saturday 23rd February 2013
Slightly hungover but up early and went for a nine mile run in snowy Wales.  Pace was under 11 minute miles but was stopping to take pictures so wasn't too bothered about that.  The MyAsics plan said just 7.5 miles so did more than strictly necessary. 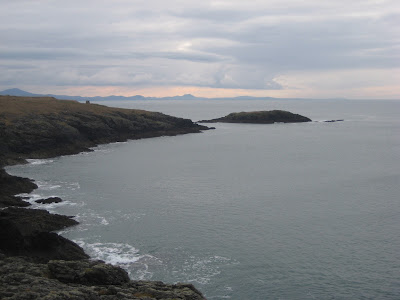 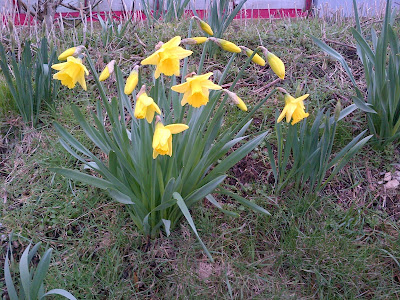 Nice to see daffodils out even though it was snowing! 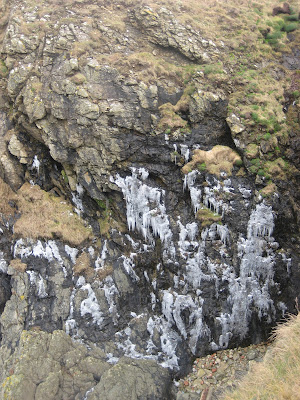 Sunday 24th February 2013
Slightly hungover yet again! Bit of a theme going on here what! Packed up and ready to go for 9am!  All good stuff


Back home for 1:30pm.  Took Pip out for a walk and then just generally did nowt!